When do the Rich Win? 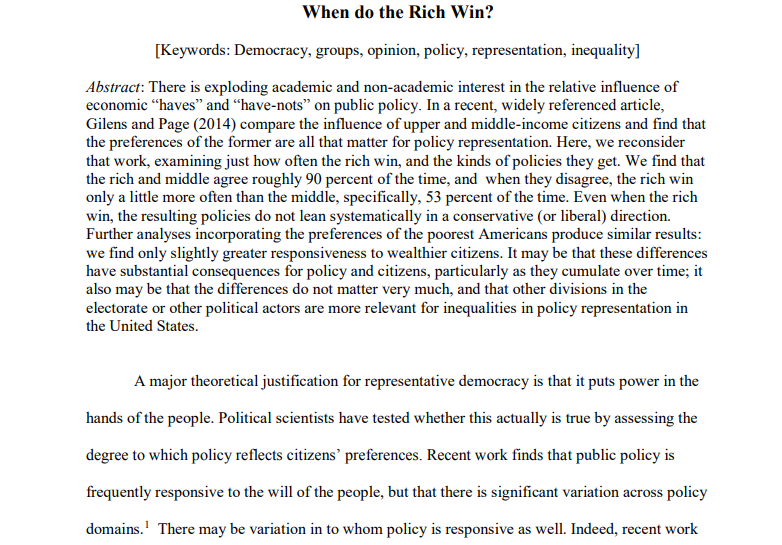 There is exploding academic and non-academic interest in the relative influence of economic “haves” and “have-nots” on public policy. In a recent, widely referenced 2014 article, Martin Gilens and Benjamin Page compare the influence of upper and middle-income citizens and find that the preferences of the former are all that matter for policy representation.

In this article, J. Alexander Branham reconsiders that work, examining just how often the rich win, and the kinds of policies they get. Branham finds that the rich and middle agree roughly 90 percent of the time, and when they disagree, the rich win only a little more often than the middle, specifically, 53 percent of the time. Even when the rich win, the resulting policies do not lean systematically in a conservative (or liberal) direction. Further analyses incorporating the preferences of the poorest Americans produce similar results: Branham finds only slightly greater responsiveness to wealthier citizens.

Ultimately, it may be that these differences have substantial consequences for policy and citizens, particularly as they accumulate over time; however, it also may be that the differences do not matter very much, and that other divisions in the electorate or other political actors are more relevant for inequalities in policy representation in the United States.

Does Money Buy Elections? The Impact of Spending on U.S. Congressional Campaigns

For many Americans, money is one of the most troubling aspects in modern election campaigns. The reasons voters give are simple: money is seen as a barrier ...

The Distribution of Campaign Spending Benefits across Groups

Scholarly attention to congressional campaign spending has focused primarily on the benefits candidates receive from that spending, from challenger deterrence to election victory to ...