The 2015 proxy season is underway and all indications suggest that it will be another record-breaking year for the number of proposals targeting companies on their corporate political spending and lobbying activities. In 2014, political and lobbying disclosure comprised 22% of all shareholder proposals with 86 that went to a vote. Meanwhile, the Fortune 250 has seen proposals targeting these activities increase by 120% since 2010.

The dramatic increase in these proposals can be traced back to the often-misunderstood Citizens United ruling five years ago. Responding to unsubstantiated fears that corporations would unleash spending to achieve their public policy goals, liberal groups and social activist investors implemented a campaign to ultimately defund business groups and trade associations through the levers of corporate governance. Instead of debating the merits of public policy on the playing field of ideas, they have resorted to a playbook of name and shame tactics that follow on the heels of a virtuous plea for more disclosure.

Behind this campaign is a tight-knit community of liberal policy groups such as the Center for Political Accountability, Committee for Economic Development, and their social investor partners including Green Century Capital, Walden Asset Management, Trillium Asset Management, the Clean Yield Group, As You Sow Foundation, Northstar Asset Management, Domini Social Investments, and several other Union-backed and Religious Pension funds.  In fact, in 2014, activist investors and organized labor submitted a staggering 91% of the Fortune 250 proposals. These are groups with a political agenda unrelated to the economic vitality of the companies they invest in. 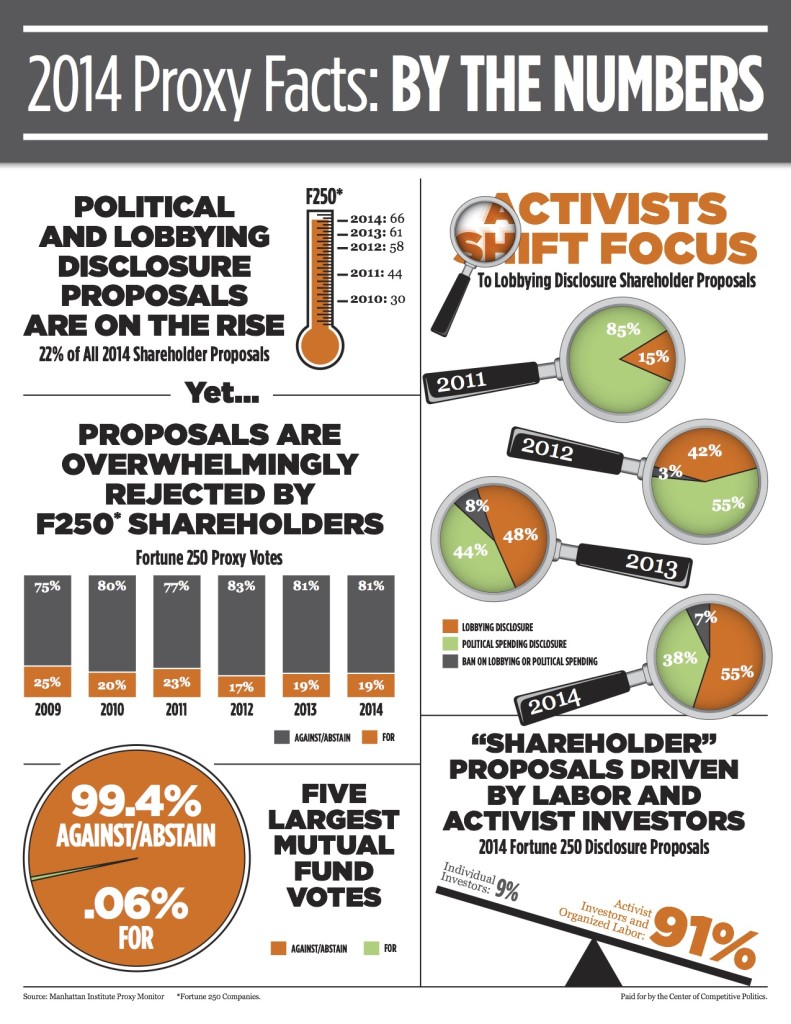 Initially, activists targeted the disclosure of general corporate dues to trade associations, but now their focus has shifted to line-item specifics such as lobbying related expenses. Since 2011, the lobbying disclosure proposals have increased from 15% to 55% of spending type proposals. This change indicates their intentions to threaten the companies they know are advocating for policies with which they do not agree.

Meanwhile, investors across the board have overwhelmingly rejected these shareholder proposals, seeing them for what they are: immaterial. 81% of investors in the Fortune 250 voted against political spending disclosure proposals in 2013 and 2014. In 2012, it was 83% of investors who said no. And in 2014, the five largest mutual funds voted against and abstained from these proposals 99.4% of the time.

These are important facts for corporations, investors, and policymakers to consider as we embark on the next proxy season. This is a campaign driven by a small group of activist investors in coordination with policy groups that apply pressure inside and outside of the boardroom to limit speech to only those they agree with. Keep this in mind the next time you hear about the “virtuous” proposals related to disclosure…

While the debate about what Halloween costumes are appropriate rages on, what isn’t up for debate is the greatness of the growing trend of ...