No Evidence of Scandal at ActBlue 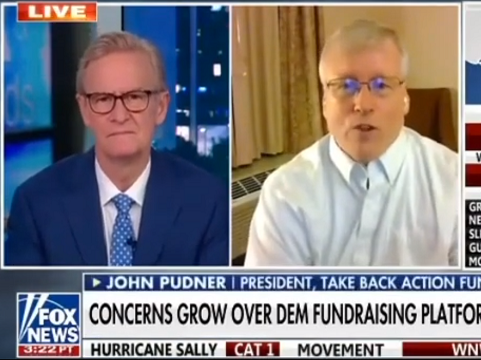 Take Back Action Fund recently peddled a so-called “preliminary computer analysis” of contributions made through ActBlue, a PAC that is the nation’s largest bundler of candidate contributions. As you might guess from the PAC’s name, it bundles for Democrats only.

The Action Fund’s analysis was then “obtained exclusively by Fox News,” which reported on the data with the scary headline: “Data shows that half of 2019 donations to ActBlue came from untraceable ‘unemployed’ donors.”

Here’s an excerpt from the story:

Action Fund President John Pudner questioned the veracity of those donations and called it a loophole that must be closed for the sake of election integrity.

“After downloading hundreds of millions of [dollars in] donations to the Take Back Action Fund servers, we were shocked to see that almost half of the donations to ActBlue in 2019 claimed to be unemployed individuals,” he said. “The name of employers must be disclosed when making political donations, but more than 4.7 million donations came from people who claimed they did not have an employer. Those 4.7 million donations totaled $346 million ActBlue raised and sent to liberal causes.”

In fairness to the story, it did also say “ActBlue defends the integrity of its donations and said many come from retirees and people who aren’t counted as employed, such as homemakers.” But the rest of the story reproduced “data” that appeared to show the opposite, that ActBlue was hiding the employer and occupation information of its donors.

The article offers these figures as proof of wrongdoing: 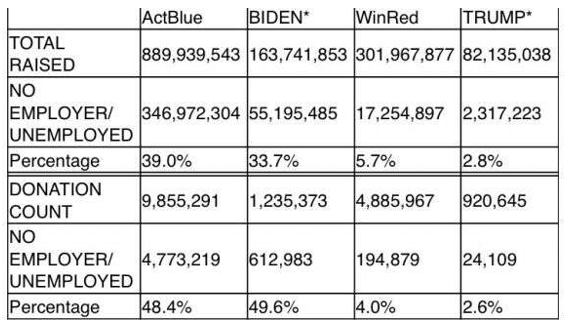 I can report that ActBlue appears to be right, and Pudner and Fox are wrong.

For starters, these donations are not “untraceable.” All of the donations list each contributor’s name and address.

Pudner is also wrong when he claims that “the name of employers must be disclosed when making political donations.” The law only requires PACs, like ActBlue, to ask for a contributor’s employer and occupation. If the contributor doesn’t provide it, the organization must use “best efforts” to obtain the information.[1] That largely means the PAC must contact you again to request the information and do so within 30 days.

As a contributor, you don’t have to give the name of your employer and occupation. And there is good reason not to. Your contribution reflects your opinion about the candidate, party, or political committee you are supporting. If you list your employer, often some people suspect your employer is taking a similar stand. That can lead to boycotts or threats against your employer, which can lead to headaches in your work life.

Now, let’s look at the data. Pudner and Fox mischaracterize the ActBlue reports. The reports list “not employed” for many of their contributors, not “unemployed” as alleged. Retired people are classified as “not employed,” as are homemakers.

WinRed, the Republican version of ActBlue, is the key basis for comparison by the Action Fund and Fox News. The two bundlers appear to account for a substantial portion of the funds raised by the Trump and Biden campaigns.

I sampled a large portion of contributors from WinRed’s April 2020 quarterly report. Of the over 1 million earmarked (bundled) candidate contributions I reviewed, only about 2,000 listed “not employed” for occupation and employer. However, about 620,000 donors list their occupation as “retired.” In all, about 61% of WinRed donors in the quarterly report didn’t list an employer or occupation. This isn’t very surprising, given that the GOP’s fundraising base is well known for skewing older.

WinRed’s online contribution form allows a contributor to indicate whether they are “retired.” Individuals that select this option appear to be reported as “retired” (for their employer) and “not employed” (for their occupation) on WinRed’s quarterly reports.

I also reviewed a large sample of bundled contributions from the July 2020 ActBlue monthly report. Of the sampled 850,067 donations, 414,226 were marked as “not employed” for both the employer and occupation fields. Another 29,451 donors marked their employer as “None” and occupation as “None.” An additional 18,785 ActBlue donors listed their occupation as “retired.” So overall, a bit more than 54% of ActBlue’s donors appear to be retired or unemployed.

Unlike WinRed, ActBlue’s online contribution form forces donors to answer the question “Are you employed?” The group does not offer a checkbox for “retired.” So, I would imagine that most retired donors indicate they are not employed. After all, how else would a retiree answer that question? A small number perhaps don’t like thinking of themselves as “not employed.” So those people, who appear to account for about one in every 25 of the retired contributors, manually fill in the occupation and employer boxes as “retired” after choosing the “Yes” answer to the “Are you employed?” question.

So the differences in reporting between ActBlue and WinRed appear to be solely a function of how the two organizations prompt contributors to provide their employer info – either by checking a “retired” box or answering, using a radio button, the question, “Are you employed?”

I think we can conclude, with confidence, that ActBlue is not hiding anything. If there is any surprise in this data, it’s how many retired persons make contributions to candidates.