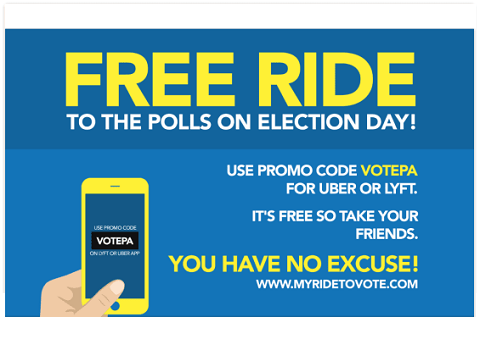 Three cheers for Uber and Lyft for offering discounted (and, in many cases, free) rides to voters on Election Day. It’s a shame that the law arguably makes doing so illegal.

The question of whether Uber and Lyft can offer rides illustrates much of what is wrong with campaign finance law. It is absurdly complex and chills ordinary political activity we ought to encourage.

Unfortunately, a pretty strong argument could be made that Uber and Lyft might be doing something wrong under federal campaign finance law that regulates corporate and union spending. If a complaint is filed with the FEC making these arguments, some commissioners might even find a reason to believe a violation has occurred in their poll ride programs. These commissioners might want to authorize an investigation.

If the person who filed such a complaint believed that the relevant FEC regulations are too permissive compared to the statute (as they arguably are here), he or she could take the matter to court if the FEC dismissed the complaint based on compliance with the regulation.

The Institute for Free Speech would disagree with these arguments, but the fact that an argument can be made illustrates the dangerous complexity and chill in something that should be simple and clear. Or not regulated at all.

Importantly, only giant companies like Uber can afford the legal help and the PR advice necessary to avoid potential legal issues. But because of the state of the law, there is still legal risk, even to Uber. If a local taxi company or group tried what Uber and Lyft are doing, they could easily wind up in legal trouble.

It’s also worth noting that these ride discounts would likely be considered federal election activity. Hopefully for Uber and Lyft’s sake, no elected official asked them to offer this service. That issue, which is outside the scope of this post, would likely open another can of worms for the companies.

So with that introduction, here is a dive into the law and relevant regulations.

For background, Uber’s press release is here, and a blog post from Lyft’s about their discounted Election Day rides program is here.

Rides from the polls are not exempt under the regulations. That could explain why Uber and Lyft are not offering a ride back. The regulation, available here, is § 114.4(d). Here are the relevant parts:

2. ii. *** The get-out-the-vote drive shall not be directed primarily to individuals currently registered with the political party favored by the corporation or labor organization.

2. iii. These services shall be made available without regard to the voter’s political preference. Information and other assistance regarding registering or voting, including transportation and other services offered, shall not be withheld or refused on the basis of support for or opposition to particular candidates or a particular political party.

2. v. The corporation or labor organization shall notify those receiving information or assistance of the requirements of paragraph (d)(2)(iii) of this section. The notification shall be made in writing at the time of the registration or get-out-the-vote drive.

Uber appears to not be complying with (d)(2)(v). When I opened the app this morning and requested a ride to my polling location, there was no such disclaimer. Maybe they forgot, or perhaps this requirement is widely ignored.

Additional risks may arise if the rides tilt in favor of a particular political party. Given the demographics of Uber riders, this is a non-trivial risk. The company’s riders appear to skew heavily young and urban, characteristics which both strongly correlate with registered Democrats.

Note that (d)(2)(ii) says that “The get-out-the-vote drive shall not be directed primarily to individuals currently registered with the political party favored by the corporation or labor organization.”

There is more than one interpretation of that sentence. If Uber knows that its customers skew to Democrats (or are “primarily” Democrats), would offering this poll-riding service trigger a violation? Perhaps.

Let’s pretend that George Soros or Michael Bloomberg wanted to drive up Democratic turnout using money from a corporation they own. One of them figures out that 70% of the Uber riders are likely to be Democrats and gives money to Uber to offer the same discount code. Would that be a violation for Soros or Bloomberg? If so, why not for Uber on its own?

And then there is the risk to Uber from its drivers, who are not employees. What happens if some drivers tell the rider how to vote on a federal race ((d)(2)(i) says no express advocacy is allowed)? What if some poll riding customers are wearing MAGA hats and drivers in San Francisco refuse to take them to their voting location? What about a pro-life driver who refuses to ride a Planned Parenthood supporter?

For the sake of argument, let’s assume that Uber drivers behave according to the regulations, and it turns out that users don’t skew to one particular party and so on. There is still more risk for Uber and Lyft. Thanks to the recent Crossroads GPS decision, people and groups can’t even rely on valid FEC regulations to avoid penalties for violating the law. And the FEC regulation allowing the activity in this context arguably goes beyond the law.

Once again, it’s a problem generated in part by the phrase “anything of value,” most recently at issue in the payments from Michael Cohen to Stormy Daniels. In relevant part, 52 U.S.C. 30118 says:

(2) For purposes of this section and section 79l(h) of title 15,[1] the term “contribution or expenditure”… includes… anything of value… in connection with any election to any of the offices referred to in this section… but shall not include… (B) nonpartisan registration and get-out-the-vote campaigns by a corporation aimed at its stockholders and executive or administrative personnel and their families, or by a labor organization aimed at its members and their families….

The regulation goes beyond the restricted class allowed in the statute. The statute defines a contribution or expenditure as “anything of value” “in connection with any election” unless aimed at a restricted class. So what Uber and Lyft are doing arguably is plainly illegal under the statute’s text.

It appears the FEC did not update § 114.4(d) in the wake of Citizens United because § 114.4(d)(2)(i) bans express advocacy by corporations and labor unions as part of GOTV efforts.

We’re not sure if there are any court decisions on this issue. And we doubt groups like the Campaign Legal Center or Citizens for Responsibility and Ethics in Washington or anyone else would file a complaint. But the law does seem to ban what Uber and Lyft are doing.

It’s likely a lot of lawyering went into Uber and Lyft’s programs. And even with all that, the companies probably didn’t get a certain answer, but decided the risk was low enough to be worth the benefit to their image.

Good for Uber and Lyft for promoting citizen participation in elections. The real shame is that the campaign finance laws and regulations arguably make what they are doing illegal. Something should be done about that.

Setting the Record Straight: A Response to CLC’s Attacks on Judge Kavanaugh

When Justice Kennedy announced his retirement from the Supreme Court last month, the Institute for Free Speech conducted a thorough review of the First ...

Were efforts to sway Electoral College illegal under FECA? Could be.

The six weeks since the presidential election have seen a new phenomenon: liberals, progressives, and Democrats, and a handful of anti-Trump Republicans engaged in ...