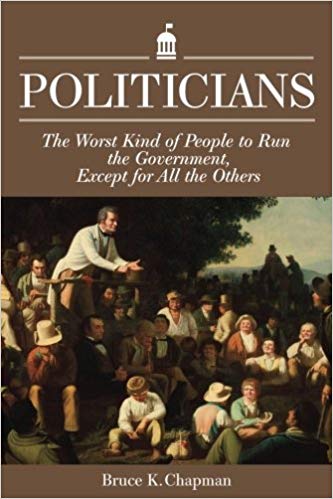 What kind of people do we want running the government? Former Washington Secretary of State, diplomat, and current Chairman of the Board of the Discovery Institute, Bruce Chapman, endeavors to answer that question in his latest work.

The title of Chapman’s new book, Politicians: The Worst Kind of People to Run the Government Except for All the Others, borrows from the classic quote about democracy oft attributed to Winston Churchill. In Politicians, Chapman examines the paradox of why people have so little faith in the politicians they choose to send to Washington, D.C. If politicians are responsible to the wishes of the people, why do Americans believe they hold too much power? Why are unelected bureaucrats viewed as having too little power?

The complete answers to these questions are much too complex for the purposes of this short book review. Chapman, however, posits a few interesting ideas for what has partially caused this sentiment among the American people. One particularly interesting theory Chapman considers is that the relative weakening of political parties has stifled political involvement. As a result, many Americans feel estranged from the political process.

Chapman traces a major weakening of political parties to the explosion of campaign finance laws, specifically the 2002 regulations passed by Congress in legislation commonly known as McCain-Feingold. While many see campaign finance restrictions as affecting only the wealthy, Chapman alludes to how the strongest effects are felt by everyday Americans at the local level.

Political parties provide an avenue for political novices to get their first experience in the political process, mostly on the state or local level. Through political parties, many people even get to know their elected representatives first-hand. As state and local parties’ funding has dried up due to McCain-Feingold, so too have opportunities to get involved.

Beyond any interaction with political parties, many Americans first foray in politics is donating either time or money to a friend running for political office. Most citizens get their political start in contests for small offices, such as school board or city council, where the cost of a campaign is minimal. But due to reporting requirements designed for much larger races, even very small donations can bring large headaches from the paperwork required to comply with a complex web of local, state, and federal laws.

As a result, candidates for local office often choose to self-finance rather than deal with the intense amount of time – and paperwork – required when asking friends for small donations. In Politicians, Chapman shares an anecdote of a woman running for village council in Ohio. (In full disclosure, the anecdote is about IFS Chairman Bradley A. Smith’s wife.) Since she would have had to comply with complex campaign finance requirements after raising just $100 for her race, she instead chose to self-fund the entire $600 she spent. Because of this low reporting threshold, many of her friends and neighbors didn’t get involved. This story highlights how many people’s first foray into politics – by supporting the campaign of a friend or acquaintance they agree with and believe in – never occurs.

A well-functioning democracy with politicians responsive to the concerns of their constituents requires an involved and engaged citizenry. As proponents of McCain-Feingold and other infringements on political speech have worked to pass laws to ostensibly prevent corruption, Chapman explains how these so-called “reformers” have cut everyday individuals out of the political process. Once removed, Chapman argues people feel isolated from the very people they elect to office.

Fortunately, this problem is not without solutions. Strengthening the institutions through which people get involved and interact with their government can happen through simple reforms. One such reform:  raising the amount of money an individual can give before their private information must be disclosed to the government and posted in a searchable database in perpetuity. At the federal level, any political donations over $200 are publicly disclosed, hardly enough money to corrupt a candidate. In states like Michigan and Louisiana, the situation is even worse. A simple $1 donation to a candidate in either state (as well as a handful of others) will cause your name, home address, and employer to be listed along with the amount you gave in a government database. Aside from the serious privacy concerns, such onerous disclosure obligations result in a tremendous amount of paperwork for candidates. These burdens fall even harder on grassroots candidates and those who are less experienced.

Regardless of the solution, a common-sense principle should be true of all laws in this area: campaign finance regulations should be simplified so they can be understood by everyday citizens, without the aid of an expensive campaign finance attorney.

While these solutions may not be a cure-all to the issues Chapman addresses in Politicians, simplifying and removing laws that make it harder for everyday Americans to get involved in the political process would do a great deal to promote civic engagement and a healthier view of our democracy.

At a time where trust in government continues to decline, Chapman’s book offers a thoughtful and nuanced look at the issues we face. Anyone interested in promoting self-government and civic participation should do themselves a favor and read Chapman’s latest work.

On First Amendment Issues, 2016 Party Platforms Differ Greatly from Each Other, But also from 2012

The Democratic and Republican National Conventions have ended, and attention has shifted to the general election season ahead. Yet the parties’ respective platforms endure ...

“Drain the Swamp” and Competing Conceptions of Corruption

Congressman Ken Buck (R-CO) is a founding member of the Freedom Caucus and the latest conservative to come out with a book criticizing the ...