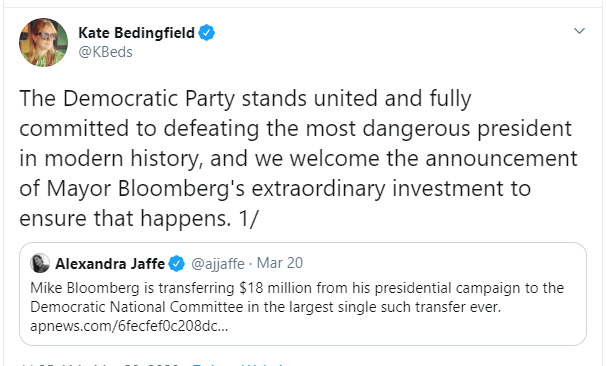 In early March, the failed presidential campaign of billionaire Michael Bloomberg added to the reams of evidence that money can’t buy electoral success. The self-funded, high-spending campaign also highlighted the many flaws and negative consequences of current limits on what Americans may contribute to campaigns.

In late March, Bloomberg highlighted why limits on individual giving to political parties should also be eliminated.

The Democratic National Committee recently accepted an $18 million transfer from Michael Bloomberg’s presidential campaign committee. All that money came directly from Bloomberg’s personal fortune. His campaign heavily promoted the fact that it was entirely self-funded, implying that candidates who accept contributions from Americans who support their message are beholden to “special interests.”

Bloomberg’s $18 million gift to the DNC is within the law. Candidate committees can legally transfer unlimited amounts to political parties.

Presumably, the Democratic Party does not now consider itself beholden to or corrupted by Michael Bloomberg. The party will use the money to support its nominee for president, activity at the heart of the First Amendment’s protections. In other words, the money will enable the party to reach voters with more speech and more information about its candidate. This should be welcome news for those who value an informed and engaged electorate. As Bloomberg and others have already shown, the money will not allow the party to buy the election.

If billionaires who run for president and fail can effectively donate unlimited sums of their money to political parties, why shouldn’t other Americans be able to do so as well?

Current law limits what individuals can contribute to the party they support. Like caps on giving to candidates’ campaign committees, these limits effectively give a special class of politicians greater First Amendment rights than anyone else. The best way to address such disparities in campaign finance law is to lift all contribution limits.

PACs, which are overwhelmingly funded by individuals, are also limited in how much they can contribute to parties. Even if it has thousands of individual contributors, a PAC can give only $5,000 per election to a candidate. Meanwhile, a campaign committee funded by one wealthy candidate can give $18 million to a party – or more, if they want. Paradoxically, the parties themselves also face strict limits on what they can give to their own candidates’ campaign committees.

None of this makes much sense. Sadly, contribution limits are just one example of how our campaign finance laws inadvertently benefit the wealthy and well-connected.

Contribution limits are limits on the exercise of First Amendment rights. Congress should act to eliminate them, for everyone.

On Monday, the American Enterprise Institute hosted an event titled “Is Congress Broken?” It featured contributing authors and editors of a book by the ...