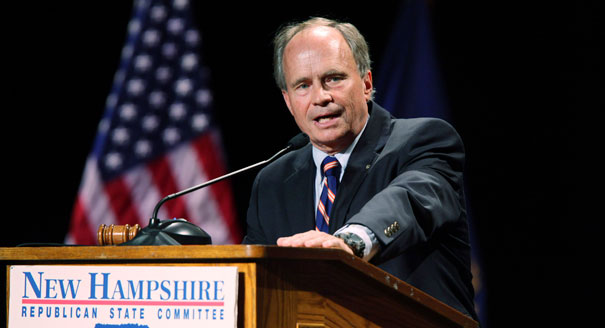 Issue One’s series of interviews with former lawmakers continued last week with a discussion featuring Charlie Bass, a Republican Congressman from New Hampshire from 1995 to 2007 and 2011 to 2013. Bass is a member of Issue One’s “ReFormers Caucus” of former government officials and representatives who support Issue One’s agenda of political speech regulation.

Bass’s interview followed a similar format to that of a previous talk with former Congressman Mike Castle (R-Del.): the interviewer tried to coax out stories of the donor-obsessed inner workings of American government, but the interviewees’ answers revealed a reality in which donor influence is not quite the crisis that Issue One argues.

Bass touches upon three major issues during his interview.

First is the topic of spending disparities between candidates. In his very first answer, Congressman Bass characterizes his experience with campaign finance mainly in those terms: “I was always outspent, with one exception. I was not one of those guys who spent a lot of time fundraising. As a result, I usually had to make do with somewhat less than my opponents.”

Concern with the spending of one’s opponent is a perennial grievance of politicians on the wrong side of a financial disparity. But the question from the rest of us should be: so what? The solution to being outraised or outspent is to fix your campaign strategy so that you can raise or spend more – or simply win with less, as Bass did repeatedly. If Bass or other candidates in his situation are concerned about their fundraising, they can change their messaging, shift their ad strategy, deploy staffers and volunteers to different areas, or take numerous other actions. However, the desire to not be outspent certainly isn’t a justification for changing the law to make campaigning easier for you and harder for your opponents. Such concerns sound mostly like sour grapes – especially from a politician who still managed to win 7 federal elections while being regularly outspent. (Perhaps because money isn’t so key to winning elections after all.)

The second issue Bass touches upon is the rising cost of elections. “I used to be able to buy two or three weeks of media before the election. But the cost went up and up and up, until finally, at the end of my last campaign, I raised and spent two million dollars – which was about three times what I raised and spent in 1994 – but I didn’t get significantly more coverage for it.”

This is an important concern for candidates and their campaigns. By virtue of factors like inflation and the growing voter population, it is increasingly difficult for candidates and groups to communicate with the public (at least through traditional media). Campaign finance law cannot reverse those trends, so one would think the best option is to not hinder the ability of candidates to spread their message. Rather, raising or eliminating contribution limits – or at least indexing them to inflation, as a majority of states do – and avoiding spending limits are a few basic ways to make sure campaigns have sufficient resources. Indeed, since 2010, 18 states – including 15 documented by CCP as well as Arkansas, Wisconsin, and Kentucky – and the federal government have increased or eliminated certain limits.

That’s not Bass’s solution, though: “I introduced a bill [in the New Hampshire State Senate] that created voluntary spending limits for candidates, and you got certain perks from the system if you agreed to limit spending – like not having to pay the exorbitant filing fee or getting a huge number of signatures that are all individually notarized.” Translation: government should impose artificial barriers on campaigns, and “reward” those that limit their own spending. Since limiting spending necessarily restricts the ability of political newcomers to introduce themselves to voters, this type of system disproportionately benefits those with strong name identification and existing public platforms – that is, incumbent lawmakers. Or celebrity billionaires like President Trump.

Finally, Bass’s interview addresses party pressure to fundraise – a topic that Castle also delved into. Unlike Castle, Bass recalls facing some fundraising pressure for committee assignments. But he also says that committee chairs were a mixture of some who are “big fundraisers” and some who aren’t. For his own part, “they would assign me a number, but I never once made it.” When asked if he faced any consequences from party leaders for this, he replies “not at all.”

If anything, the biggest factor affecting committee assignments in Congress is – surprise, surprise – politics. Bass explains, “some of my positions conflicted with those of the leadership. I couldn’t really be on the health or energy subcommittees because I’d never be voting with the Republicans.” This simple reality shouldn’t be a surprise to anyone, besides those who wrongly believe that the U.S. government functions on pure bribery.

In the end, we are left with a picture of government similar to the one Mike Castle painted: incumbents who don’t work hard at fundraising still manage to win elections, be good-standing members of their parties, and stay true to their own beliefs. The logic of ever-greater regulation, at least from the perspectives of lawmakers themselves, seems more rooted in “I don’t like having to raise more money” than “raising money corrupts government.”

No law or legislator can regulate away the fact that communicating with voters is expensive, or that some people are simply better at fundraising than others. Nevertheless, efforts to do so continue – justified in public by the simple-minded idealism of “reform” groups, but motivated in private by a cold desire to cling to power. Cracking down on First Amendment freedoms just to make politicians’ lives easier creates a disaster for free speech and a competitive political process. Issue One’s interviews have done little to convince anyone otherwise.