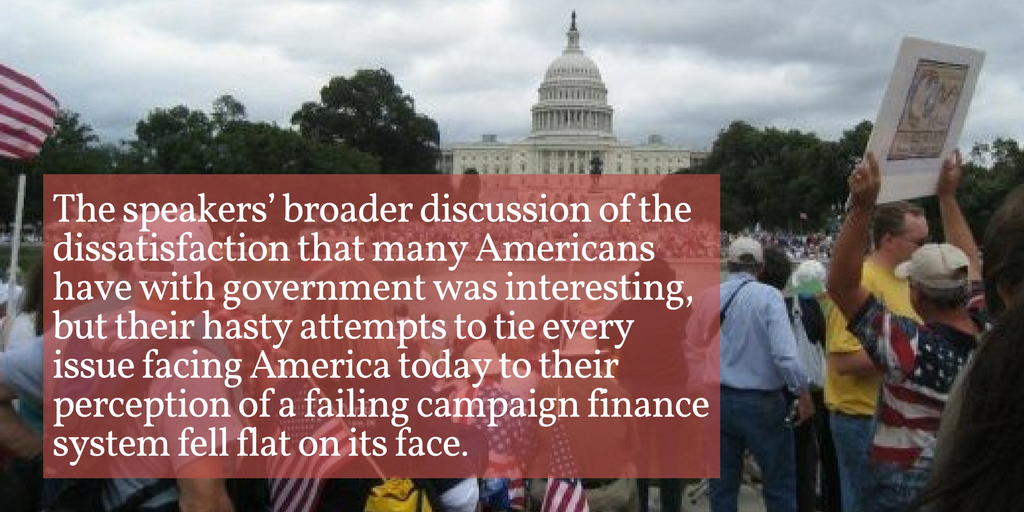 Last Wednesday, Issue One, a group that advocates for more government regulation of political speech, held an event at the Center for Strategic and International Studies. It was a fitting location for a succinctly titled panel discussion, “Democracy = National Security.” Throughout the hour-long event, a number of former members of Congress and appointed public officials offered their takes, including former Reps. Porter Goss, Tim Roemer, Zack Wamp, Lee Hamilton, Connie Morella, and former Senator Richard Lugar. Former National Security Advisor Jim Jones, as well as Nick Penniman and Meredith McGehee of Issue One, also spoke.

The event coincided with the release of a coalition letter signed by former lawmakers asserting that our democratic system of government is being “paralyzed” by “the dominance of money in both politics and policymaking,” and concluding that this supposed state of affairs constitutes a direct threat to our national security. All of the panelists spoke in support of the letter, calling on their individual experiences in the nation’s capital to argue that, at least in their view, business is not as usual in D.C. The speakers’ broader discussion of the dissatisfaction that many Americans have with government was interesting, but their hasty attempts to tie every issue facing America today to their perception of a failing campaign finance system fell flat on its face.

The conversation bounced back and forth, but everything ultimately circled back to the notion that our nation’s security is being threatened by dysfunction in our institutions. The alleged culprits? Big money in politics distracting politicians, gridlock at the Federal Election Commission (FEC), and foreign hackers, to name a few.

According to the speakers’ collective narrative, because politicians spend so much time fundraising, they are unable to do their job when it comes time to govern. Namely, to pass defense spending bills, in this case. Former Congressman Wamp went so far as to declare “there is a crisis happening in America” because our elected officials are distracted by an “addiction to campaigns and raising money.” In response, the speakers argued that the solution was to grant government more authority to regulate speech. However, restricting individuals’ ability to speak and associate with politically-oriented groups only further alienates Americans from government. And if lawmakers were really concerned about the amount of time spent fundraising, they’d consider raising federal contribution limits, as over 15 states have done since 2010.

Another common foe was the Federal Election Commission. Almost all of the speakers berated the agency for allegedly failing to do its job in enforcing campaign finance laws, citing the Commission’s bipartisan structure as the culprit. According to former Congressman Goss, existing campaign finance laws were “not being enforced” by the Commission and as a result, campaigns were “violating laws” left and right. According to the panelists, the best solution is to change the structure of the FEC from 6 commissioners to 5, citing legislation that has been introduced in the House and the Senate.

While neither these claims nor the proposed solutions are surprising – and certainly nothing new from Issue One – they are way off base. With respect to charges of dysfunction at the FEC, the architects of the Commission structured the body purposefully with six commissioners (and no more than three from any one party). This crucial structural design ensures that the power of the FEC to regulate speech cannot be wielded by one party against another to silence political opposition through new regulations or taxing investigations. Further, claims of gridlock on the Commission are wildly overblown. In 2014, the FEC achieved bipartisan consensus on 93% of all votes, and an 86% rate of approval on substantive matters. For an agency that deals with an issue as sensitive as the regulation of political speech, a 14% rate of “gridlock” is hardly the hallmark of “dysfunction.”

Goss’s charge that the Commission isn’t enforcing the law is also wildly off base. This trite attack overshadows deep philosophical disagreements about the law and how to enforce it among the commissioners as well as the fact that candidates, political committees, and political parties habitually abide by federal contribution limits and disclosure requirements – and are routinely investigated and fined when they fail to do so.

Throughout the discussion, the speakers’ doomsday rhetoric painted the political system as dominated by powerful, anonymous interests who take voters out of the equation, and that the Federal Election Commission is not doing its job, sowing dysfunction in American democracy. Several panelists, including former Congressman Roemer, asserted, “polls show that the American people don’t trust Congress. That causes other countries, including our allies, to believe in our leadership less.”

While it’s true that many Americans are unsatisfied with Washington, Issue One’s attempts to tie campaign finance regulation to those concerns are unsubstantiated. In a September 2017 Gallup poll, only 18 percent of respondents cited “Dissatisfaction with government/Poor leadership” as the number one issue that concerns them. Less than 0.5 percent of respondents cited campaign finance concerns. Lest anyone be fooled, this is a longstanding trend.

At the end of the discussion, Meredith McGehee of Issue One proclaimed that “dysfunction lessens our ability to be an international leader.” On that point, McGehee is correct: national security and dysfunction in government are two key issues facing our country today. We should be having meaningful discussions on how best to deal with these issues. However, clickbait attempts to tie greater limits on political speech to every single issue that hits the news cycle are not helpful (and arguably harmful) to that discussion.

Does Money Buy Elections? According to Alabama, Evidently Not.

Proponents of greater speech regulation often argue that candidates and groups who spend more money on elections have an unfair advantage, and, therefore, that ...

The special election for the U.S. House seat for Georgia’s Sixth Congressional District is attracting a great deal of attention from the media. The ...