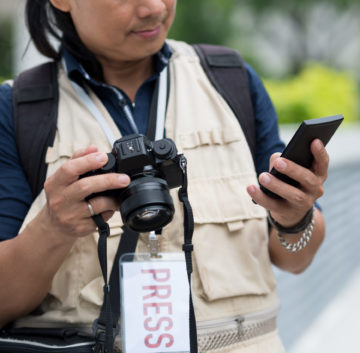 The Institute for Free Speech filed an amicus curiae brief last week before the federal district court in the District of Columbia in support of no party in the dispute. Why?

Under our federal campaign finance laws, any person can bring a complaint upon suspicion of wrongdoing, and the Federal Election Commission must review it. A frequent filer of such complaints is the Campaign Legal Center (CLC), which roves across news and disclosure reports in search of violations. CLC recently filed such a complaint about the 2016 campaign of Hillary Clinton, alleging that its cozy relationship with an independent group called Correct the Record (CTR) constituted illegal coordination. The FEC dismissed this complaint, and CLC brought a lawsuit seeking a court order forcing the Commission to accept the complaint’s theory of wrongdoing.

As a quick refresher, groups like Correct the Record are permitted to raise and spend unlimited sums of money on advocacy, so long as they don’t coordinate with a candidate’s campaign. If Correct the Record took its marching orders from the Clinton campaign, large swaths of its activity would be considered coordinated expenditures subject to contribution limits.

But our brief isn’t about that question – hence filing in support of no party. Rather, we noticed an alarming sentence in an opinion by the judge assigned to hear the case, and we wished to, if you will, “correct the record.”

The Clinton campaign and Correct the Record briefly asserted to the FEC that CTR’s activities were exempt from regulation under the so-called press or media exemption. Although this defense wasn’t the reason for the FEC’s dismissal of CLC’s complaint, Judge James E. “Jeb” Boasberg weighed in on the issue in denying the Clinton campaign’s motion to dismiss the case. Specifically, Judge Boasberg opined that the federal media exemption – the immunity from campaign finance law that lets CNN and Fox News hustle for their preferred candidates in November – is “for the media” as a class.

Troublingly, Judge Boasberg’s formulation is technically correct. (The best kind of correct, some would say.) Since the 1980s, the FEC has interpreted the press exemption as serving the needs of the institutional press in particular. This application relies on a likely unconstitutional reading of that statute, one that cannot be squared with the Press Clause of the U.S. Constitution. The Press Clause protects every American’s right to publish, not just legacy media outlets. We filed our brief to make this point and advise the court against taking the FEC’s (mis)understanding of the exemption’s reach as gospel.

Many Americans undoubtedly read the First Amendment’s prohibition against federal laws “abridging the freedom of speech, or of the press” with a modern lens and assume that the “press” protected by those words is the institutional press – i.e., the legacy media. Or guys wearing hats with a card reading “press” tucked into the hatband. You can be forgiven for thinking so. Justice Potter Stewart, who famously observed that he knew obscenity when he saw it, viewed the Press Clause this way, as “extend[ing] protection to an institution.” In Stewart’s view, “[t]he publishing business is, in short, the only organized private business that is given explicit constitutional protection.”

But this is absolutely wrong. A better understanding of the relationship between the Speech and Press Clauses is that the protection of free speech applies to what comes out of one’s mouth, and the free press guarantee protects what one writes and distributes. In Citizens United, the Supreme Court put a stake through the heart of Justice Stewart’s misunderstanding, stating “[t]here is no precedent supporting laws that attempt to distinguish between corporations which are deemed to be exempt as media corporations and those which are not. ‘We have consistently rejected the proposition that the institutional press has any constitutional privilege beyond that of other speakers.’” 558 U.S. at 352 (emphasis supplied).

This is not to say the press exemption does not protect “press activities.” It just means the FEC cannot interpret the law to privilege a specific class of businesses. (Although, as we observed in our brief, if applying campaign finance obligations to the media “brings about a feeling of trepidation… that might say something about the comprehensive onerousness of our political speech rules.”)

The FEC’s likely unconstitutional interpretation of the press exemption is unlikely to be addressed by Judge Boasberg in this case. Our brief simply advised the court to steer clear of the issue and review the FEC’s dismissal on its own terms, which focused solely on CLC’s theory of coordination.

But some future court will have to settle the matter eventually. When they do, hopefully they will know what to do with the press exemption when they see it.

A recent event at the Cato Institute examined the controversial question, “Can Free Speech be Progressive?” The query was posed by professor Louis Michael ...

Let Us Protect You From Speech

You know that feeling when you read an op-ed on a pertinent issue and all of a sudden you realize there is no author ...