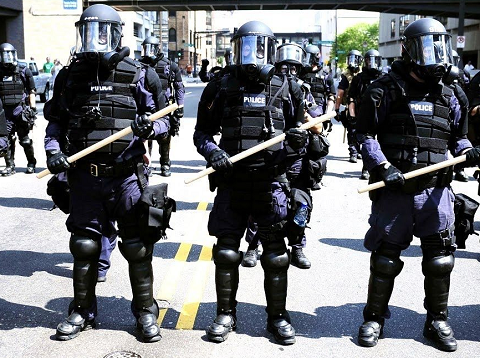 Earlier this month, the Berkeley Police Department published on Twitter the names, photos, ages, and cities of residence of protesters arrested at a “No to Marxism” rally that took place in the city. According to reports, the photos were of “Antifa” (short for anti-fascist) counter-protesters who were at the rally to oppose the message of the “alt-right” organizers.

Two days before the event, the Berkeley police issued rules that would be enforced at the demonstration. Any item “that can be used for a ‘riot’” as well as wearing “any other accessory or item that covers or partially covers the face and shields the wearer’s face from view, or partially from view” was banned. Apparently, many of the arrests were due to the enforcement of these broad rules.

By issuing these restrictions, police were attempting to prevent a repeat of violence that had broken out between the “alt-right” and “Antifa” on previous occasions and to “ensure the peaceful expression of free speech.” Indeed, the government has an obligation to protect the ability of citizens to assemble peacefully for the sake of political expression. And Antifa activists are known to view violence as an appropriate response to expression they find unacceptable, which is indefensible.

But arresting protesters for violations that would otherwise be legal, such as covering one’s face or carrying a flag pole, is questionable on First Amendment grounds, particularly when site-specific rules are issued on such short notice. Many of the rules, particularly the mask ban, seemed to specifically target those associated with Antifa as opposed to targeting violence.

According to The Guardian, only one person whose photo was posted on Twitter was explicitly alleged to have committed a violent crime (battery). Most of the others were accused of “possession of a banned weapon” or “working with others to commit a crime.”

In addition to the battery charge mentioned above, there was also at least one arrest made for vandalism. Furthermore, police reported that some “extremists” were throwing fireworks and flares at the opposing demonstrators. So, at least some of the arrests were clearly warranted.

But regardless of the legitimacy of the arrests, the decision by the Berkeley police to post the names, photos, and cities of residence of political activists on Twitter – prior to the issuance of any formal charges – is unnecessary at best and outright dangerous at worst. Mugshots are public record, but posting them on Twitter is not standard procedure when there is no public safety-related reason for doing so. It is likely that the Berkeley police are simply fed up with Antifa conduct and decided that publicly outing activists who prefer to maintain their anonymity may serve as an effective deterrent.

It is the job of the police to prevent and respond to violence. But selectively posting the names and photos of activists whom some political opponents may wish to harm is by no means an effective violence prevention effort. In fact, publicly identifying individuals associated with controversial causes only increases the chances of violent political retaliation.

For this very reason, many left-leaning activists, university professors, and lawyers were outraged at the actions of the Berkeley police.

Jay Kim, Executive Director of the National Lawyers Guild’s Berkeley chapter, told The Guardian, “It really seemed to us like the Berkeley police department was there to … target the anti-fascist protesters” and that police appeared to be arresting counter-protesters “at random.”

University of California Law Professor and former Berkeley Police Review Commissioner Veena Dubal said, “This is very disturbing. It seems like a public-shaming exercise, which is not the role of the police department … They are making it really accessible for folks who might wish these people harm to locate them.”

Predictably, some on the political right mocked the outrage over outing Antifa activists. But as former Republican Federal Election Commission Chairman Michael Toner said, this is “[a] disturbing development that should be of concern to those on the right and left alike.”

Even more concerning are calls to publicly expose the names, home addresses, and employers of Americans who choose to support and associate with nonprofit organizations advocating for social and political change. A group should not have to promote violence before there is concern about violent retaliation against its members. In an age of increasing normalization of political violence, do we really want to wait for something terrible to happen before we realize the value of privacy in one’s political associations?

But violence is not the only risk of compelled disclosure of individuals’ affiliations with groups engaged in advocacy. Harassment, intimidation, and economic reprisal are real threats that Americans have faced as a result of their political associations. Should a willingness to accept such consequences really be a prerequisite for civic engagement?

Just as the Berkeley police viewed public shaming as a deterrent, so do many advocates of broader disclosure mandates for political speech. In fact, when Senator Chuck Schumer (D-NY) introduced a nonprofit disclosure bill in 2010, he said, “The deterrent effect should not be underestimated.” He reiterated his affinity for such a deterrent effect when defending the same bill four years later.

Violence, intimidation, and harassment are never appropriate responses to speech one finds objectionable, even vile. That a free society must necessarily be a tolerant society does not mean that everyone must condone the views of everyone else. It simply means that neither citizen nor state may utilize coercion as a means of suppressing certain viewpoints.

While government-mandated disclosure of the names, home addresses, and employers of those who contribute to political causes may not be an endorsement of politically-motivated violence or harassment, it certainly makes it easier for anyone who may wish to engage in such retaliation.

The Donald and Donor Disclosure

Since the announcement of his Presidential campaign, there has been a near constant stream of mockery targeting Donald Trump. And rightly so. The aspiring ...

The Washington State Senate recently passed Senate Bill 5991, also known as the “Washington state DISCLOSE Act.” In short, the purpose of the bill ...