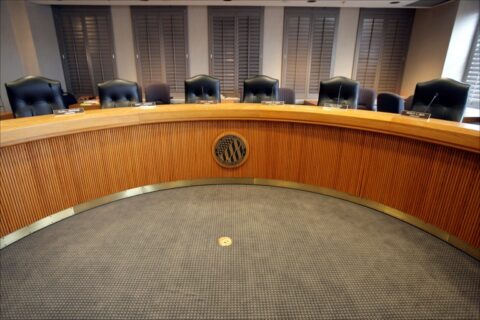 Nine former FEC commissioners fiercely criticized both H.R. 1 and S. 1 in a letter to Congressional leaders earlier today. The deceptively named “For the People Act” totals nearly 800 pages and would mushroom regulation of all manner of speech about government, elections, and public policy. It would also break the Federal Election Commission’s bipartisan structure, and in so doing, destroy its credibility.

The nine former Commissioners boast a combined six decades of experience at the FEC. At least one of the signers served on the Commission at all times between 1998 and 2020. Most also served a term as the Commission’s Chair, providing them with unique insights into the bill’s threats to speech and to the fair and effective enforcement of campaign finance laws. Among the former commissioners is Institute for Free Speech Chairman and Founder Bradley A. Smith, who signed the letter in his personal capacity.

As the letter explains, H.R. 1 and S. 1 “would transform the FEC from a bipartisan, six-member body to a five-member body subject to, and indeed designed for, partisan control.” The bill’s proponents allege that the Commission is currently ineffective because at least one member from both sides must support any new rulemaking or investigation. The former Commissioners explain that the FEC’s structure is intentional and that claims of partisan gridlock are heavily exaggerated:

Empirically, even the most extreme study of FEC votes—that is, a vigorously contested, non-peer reviewed study, conducted during a short period of relatively high disagreement within the Commission, and not transparent about its methodology or selection of votes—found a maximum of 30 percent of enforcement matters ending in 3-3 votes. But other studies, including peer-reviewed studies, have consistently found much lower rates of “deadlock,” typically in the one to six percent range.

Moreover, the argument that the bipartisan makeup of the Commission hinders its effectiveness is based on a misunderstanding of the FEC’s work and why deadlocks occasionally occur. By definition, campaign finance law inserts the government into partisan electoral disputes. In our experience, the agency’s bipartisan structure both assures that the laws are enforced with bipartisan support and equally important, that they are not perceived as a partisan tool of the majority party—an electoral weapon, if you will.

The Commission’s bipartisan structure is a strength, not a weakness, as “[i]t demands that commissioners work to reach consensus and compromise on measures to achieve bipartisan support.” Complaints about occasional 3-3 votes “come from the regulatory activists who haven’t gotten their way.”

Rather than improving the Commission, H.R. 1 would abandon bipartisan enforcement of the law in favor of a top-down approach led by a speech czar chosen by the president. The letter expresses concern about the considerable new powers given to this czar, who would inherit the title of FEC Chair but hold a very different office:

[H.R. 1] allows the Chair, who is appointed on a partisan basis by the President, to hire and fire the FEC’s General Counsel, a statutory position, with the support of just two commissioners. Thus, this crucial enforcement position can be filled with no bipartisan agreement… Further, it places sole authority to hire or fire the Commission’s Staff Director, also a statutory position, in the hands of the FEC Chair, not even requiring the support of an independent commissioner. The Staff Director oversees the Commission’s Auditing, Reports Analysis, Administrative Fines, and Alternative Dispute Resolution processes, which combined handle far more enforcement matters than the Office of General Counsel. Both the appearance and reality of bipartisanship in enforcement is fundamental to the FEC’s success, and Title VI destroys both.

The former Commissioners also pillory the bill’s changes to FEC enforcement processes (“[H.R. 1] turns the formula on its head, explicitly biasing the judicial review process in favor of findings of guilt against candidates, campaigns, and other defendants.”), reporting and disclosure requirements for advocacy groups (“The DISCLOSE Act is unnecessary, burdensome, and would stifle constitutionally protected political speech.”), and ad disclaimers (“in many cases, it would mislead the public as to the sources of an ad’s funding.”). The Commissioners also warn about the bill’s irresponsible efforts to invite the IRS and the SEC into the complex field of campaign finance regulation. (“Inviting other non-expert agencies into campaign finance enforcement would create a likelihood of inconsistent interpretations and applications of the laws and increase the complexity of a regulatory system already famous for its intricacy.”)

Amidst the innumerable problems with the bill, the letter takes care to state that the former Commissioners held back much of their fire. The letter addresses only the provisions that “concern the jurisdiction of the FEC.” But they add: “Our decision not to address provisions of [H.R. 1] changing election administration outside of FEC jurisdiction, however, should not be viewed as support for or acquiescence in those proposals.” The deeper you dig into H.R. 1 and S. 1, the less you’ll like what you learn.

Do Commissioners Weintraub and Ravel Want the FEC to Fail?

Ann Ravel, the Democratic Chair of the Federal Election Commission, made headlines early this month when she told The New York Times that her ...

Last Wednesday, Issue One, a group that advocates for more government regulation of political speech, held an event at the Center for Strategic and ...