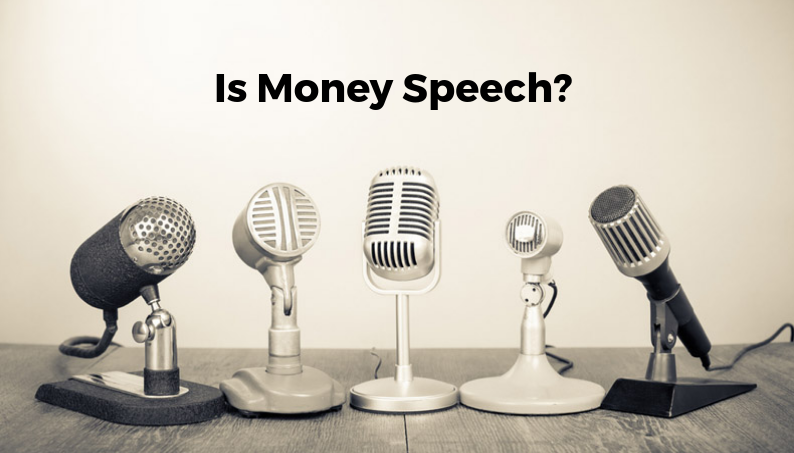 Sometimes people ask why the Institute for Free Speech should be so concerned with protecting the rights of individuals to make expenditures and contributions to political campaigns. “Money isn’t speech,” they say. They are often surprised to learn that I agree with them – to a point.

Of course, money isn’t speech – it’s money. I literally don’t know anyone who thinks that money is speech. Certainly, the justices of the Supreme Court don’t think that. Rather, the phrase “money is speech” is a convenient shorthand for a more complex idea, similar to when we say things like “time is money,” or even “money talks.” Duh, of course not.

But imagine if the government were to announce that, because “money isn’t religion,” it would ban all spending of money to support religion, and limit contributions to churches and religious organizations to some relatively small amount? “Sure,” the politicians would say, “you’re free to practice whatever religion you want. You just can’t spend money to build churches, hire pastors or other workers, purchase hymnals and religious vessels and symbols, or engage in missionary work.” To say that this would raise serious issues under the First Amendment right to freedom of religion is a gross understatement.

The same is true of another First Amendment right, freedom of the press. Could the government limit a news network to spending $25,000 a year? Could it limit the number of issues a newspaper or magazine is allowed to publish? That would assuredly bring howls of indignation from the press.

What if a conservative government, seeking a way around Roe v. Wade, announced that it would not prohibit abortions, but would simply limit the right to spend any money to provide or procure an abortion? Wherever you come down on that contentious issue, isn’t it obvious that limiting the ability to spend money would limit the activity itself? Could a liberal Congress pass a law saying no person shall spend money to purchase, sell, manufacture, or import a gun, without raising concerns under the Second Amendment? I think both gun control and gun rights advocates would recognize that you can’t get around the Second Amendment that easily.

You can make up as many examples as you want. Money isn’t a lawyer, but how valuable would the right to an attorney be if the law prohibited you from spending money to hire one? Suppose the government said you are free to travel, but not to spend money on transit, including ownership and maintenance of an automobile?

It is clear, then, that when government limits expenditures of money in order to limit an activity, it is limiting the targeted activity. Indeed, this is not a controversial proposition in law. Since the Supreme Court’s landmark campaign finance decision in the 1976 case Buckley v. Valeo, 21 justices have sat on the Supreme Court. Some of those 21 have consistently voted to uphold the constitutionality of campaign finance restrictions. Others have regularly voted to strike down such laws on constitutional grounds. And some have charted a middle path. But with just one exception, all of them have agreed that restrictions on campaign contributions and spending raise serious First Amendment issues and must be analyzed as First Amendment cases.

(That one exception is former Justice John Paul Stevens. But even Stevens agreed that the laws raised constitutional concerns, though he preferred to analyze them as a restriction on property.)

In short, when the government controls the money you spend to communicate, it controls the quantity, quality, and topics of speech that can be heard in the public arena. If that’s not a Freedom of Speech issue, I don’t know what is.