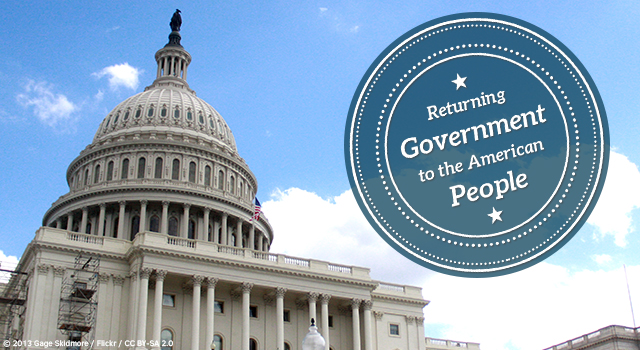 On Wednesday morning, the self-styled campaign finance “reform” group Issue One hosted an event at the National Press Club in Washington, D.C. The event, entitled “Returning Government to the People,” was billed as the launch of a new policy initiative to further regulate our campaign finance system. Several members of the press were in attendance (who seemed to make up most of the audience), and the main speakers were former members of Congress and cabinet members: Dan Glickman, Ray LaHood, Connie Morella, Tim Roemer, and Zach Wamp. Also speaking were Meredith McGehee and Nick Penniman of Issue One.

Although the former members of Congress participating in the event consisted of members of different parties, their common foe was the campaign finance system, which they claim is dominated by wealthy, anonymous interests at the expense of voters. Participants argued that the 2016 election had demonstrated that Americans were fed up with the current system, and that this translated into a mandate for the Trump administration to pass new political speech laws.

Those speaking did not outline the specifics of their policy framework during the talk, but the Issue One initiative purports to focus on five “core values:”

Many of these proposals are fixtures of the post-Watergate “reform” agenda long pushed by activist groups and lawmakers. The problem is that these proposed policies would stifle free speech without improving government. After all, past efforts to reduce the role of private campaign contributions have not led to “good government,” less corruption, or even greater voter participation.

These facts contradict the rhetoric of the speakers, who wasted no opportunity to firmly insist that “money in politics” was corrupting the entire system. Congressman Wamp asserted that we have a “rigged” system devoted to “incumbent protection,” where lawmakers only care about gaining and holding onto power. (In reality, high incumbent re-election rates are nothing new and “reform” policies tend to protect incumbents). Secretary Glickman, meanwhile, cast lawmakers as victims of a system that “does not reward courage,” forces them to constantly fundraise, and exposes them to more negative advertising due to the volume of money being spent. Frankly, lawmakers should not expect to be above criticism by private citizens, and raising or eliminating our low contribution limits would alleviate lawmakers’ fundraising burden.

Ambassador Roemer went even further, condemning the FEC as “useless” and “feckless,” and insisted that the 2018 midterm elections “won’t even be determined by voters,” but by wealthy interests. (Secretary LaHood contradicted this assertion later when he conceded, after a question about Donald Trump and Bernie Sanders’ support from small donors, “ideas win elections, we know that.”) Roemer lamented that during his global travels, people no longer saw the American political system as an example to emulate. Rather, they shake their heads and ask “why is the system dominated by money and billionaires?”

This echoed a familiar refrain throughout the event – that people perceive the system to be broken, which diminishes its legitimacy. It is a criticism that might be easier to accept if those same reform activists didn’t contribute to such perceptions with their own apocalyptic, and often misleading, rhetoric (such as the false claim, repeated multiple times at today’s event, that super PACs do not disclose their donors).

Still, Issue One seems intent on perpetuating this same narrative in 2017, as they twice appealed directly to their audience: “we hope the media will help us” remind voters of this issue. We can only hope that the media will instead take to heart Secretary Glickman’s paraphrase of John Maynard Keynes: “for every problem, there is a simple and wrong solution.” We at CCP agree wholeheartedly, and believe that the notion that the government can improve democracy by regulating free political speech is as simplistic as it is mistaken. Hopefully, the media and voters will approach these policy proposals with a more critical eye.