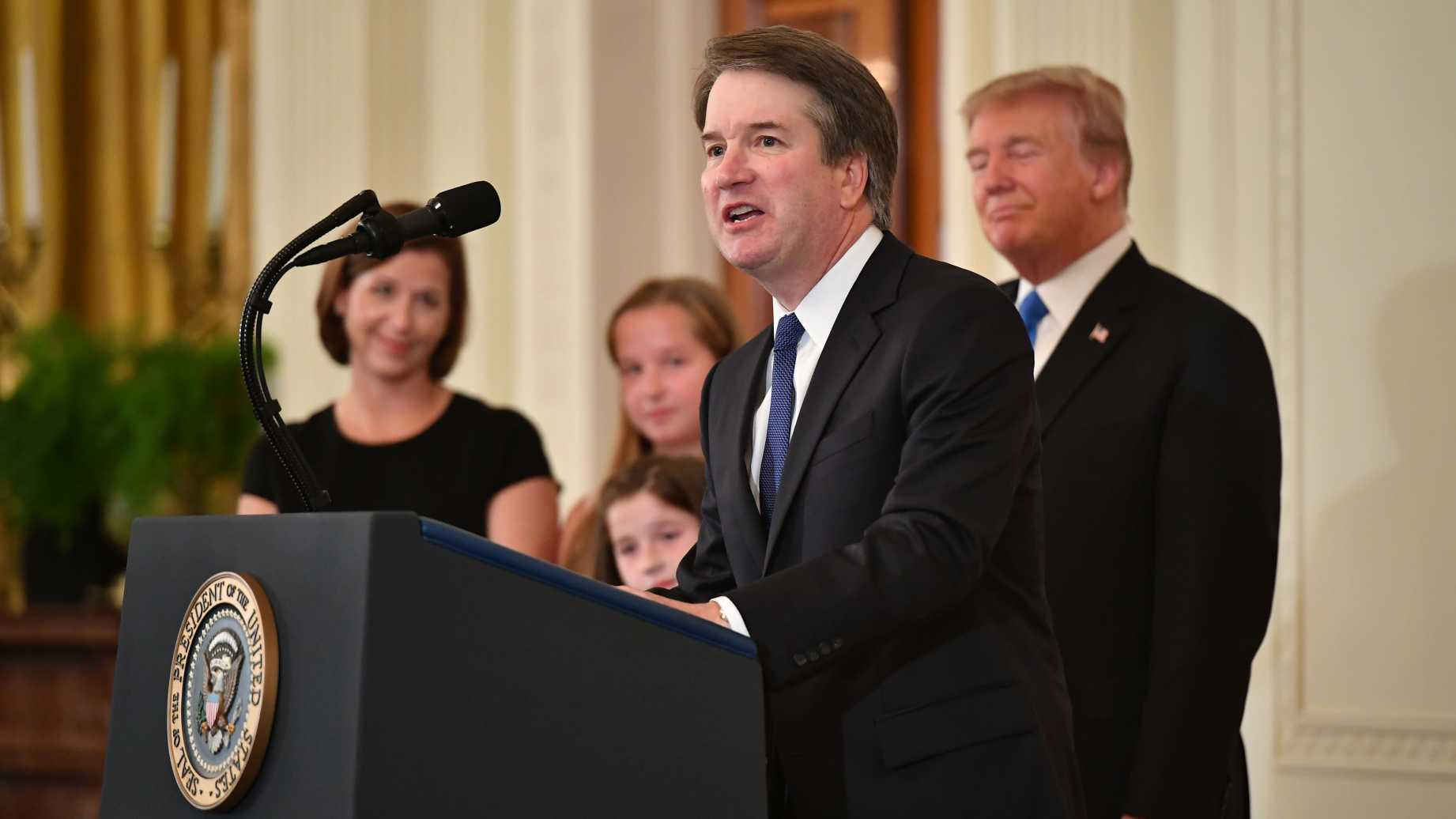 The Federal Election Commission (FEC) is unique in that an even number of commissioners conducts agency business. No more than three of six commissioners can be from the same political party. Among the commission’s prerogatives is to decide when to bring enforcement matters against alleged wrongdoers. Congress designed the agency, in part, to root out meritless complaints and avoid partisan or viewpoint-based enforcement of campaign finance laws.

As a result, some votes on whether to pursue enforcement matters end in 3-3 ties. This case explores the jurisdictional ramifications of these ties via the Administrative Procedure Act and judicial review. In a three-judge panel appeal, Judge Kavanaugh joined an opinion by senior Judge A. Raymond Randolph to bar court intervention in a Commission decision to dismiss a case via prosecutorial discretion.

In 2011, Citizens for Responsibility and Ethics in Washington (CREW) filed an administrative complaint against a now-defunct association for alleged campaign finance violations during the 2010 midterms.

CREW invoked FECA’s judicial review section and sued the FEC in federal district court complaining the Commission’s dismissal was “contrary to law.” CREW argued it was the court’s job to review the merits of dismissal. That court held the Commission’s action was a “rational exercise of prosecutorial discretion.” CREW appealed.

On appeal, the DC Circuit grappled with two questions: (1) can only three of six commissioners speak definitively for the FEC?; and (2) if so, was the dismissal a valid act of prosecutorial discretion that ends the inquiry, or is it subject to judicial review?

Together, these cases establish two propositions of circuit law. The first is that if the Commission fails to muster four votes in favor of initiating an enforcement proceeding, the Commissioners who voted against taking that action should issue a statement explaining their votes. Common Cause, 842 F.2d at 449. The second is that, for purposes of judicial review, the statement or statements of those naysayers – the so-called “controlling Commissioners” – will be treated as if they were expressing the Commission’s rationale for dismissal[.]

In this case, the “controlling Commissioners” declined to pursue enforcement on prosecutorial discretion grounds. They stated why, in their view, the FEC should dismiss the case. The reasons included statute of limitations issues and that the association no longer existed, had no money, no counsel, and no agents that could legally bind it.

The opinion noted clear precedents on the issue of prosecutorial discretion in the context of administrative law, noting that “[a]s to an agency’s prosecutorial discretion, Heckler v. Chaney is the leading case. Chaney interpreted APA § 701(a)(2), which bars judicial review of agency action ‘committed to agency discretion by law.’ 5 U.S.C. § 701(a)(2). Under § 701(a)(2), ‘certain categories of administrative decisions are unreviewable,’ among which are ‘agency decisions not to institute enforcement proceedings.’ Secretary of Labor v. Twentymile Coal Co., 456 F.3d 151, 156 (D.C. Cir. 2006).”

But this “unreviewable prosecutorial discretion” comes with a caveat. “An agency’s decision not to undertake enforcement ‘is only presumptively unreviewable; the presumption may be rebutted where the substantive statute has provided guidelines for the agency to follow in exercising its enforcement powers.’” Heckler v. Chaney, 470 U.S. 821, 832–33 (1985).

Here, FECA is the substantive statute. FECA states enforcement actions “may” proceed with four commissioner votes. 52 U.S.C. § 30109(a)(6)(A). This language did not disturb the rule against judicial review, and the caveat did not apply. “The three naysayers on the Commission placed their judgment squarely on the ground of prosecutorial discretion. Nothing in the substantive statute [FECA] overcomes the presumption against judicial review.”

The Court concluded that because prosecutorial discretion is committed to the FEC by law, “a court would have no meaningful standard against which to judge the agency’s exercise of discretion.” Chaney, 470 U.S. at 830. Thus, combining precedent, the APA, and the provisions of FECA that control the FEC’s structure and authority, such decisions not to bring enforcement actions stop at the Commission level.

The majority then explored whether such a dismissal ended the case or if CREW could appeal to the courts.

The decision rebuked CREW’s attempt to “sweep these precedents off the table. With the way thus cleared, it argues that whenever the Commission exercises its prosecutorial discretion to decline an enforcement action, it acts ‘contrary to law.’ Implicit is the idea that even if the Commission’s exercise of prosecutorial discretion is immune from judicial questioning, this does not close the door. Instead, it triggers FECA’s ‘citizen-suit’ provision, which entitles a private entity to bring an enforcement action when the Commission has declined to do so.”

In short, CREW hoped to remove some enforcement responsibility from the FEC as dictated through FECA where 3-3 ties occurred. But when the “controlling Commissioners” explain their rationales for exercising prosecutorial discretion, it becomes the de facto Commission opinion that a court may not parse.

Importantly, the decision overruled some dangerous reasoning by the lower court:

The district court held that an agency’s “absolute discretion” to decide whether to bring an enforcement action will be sustained unless the petitioner shows that the Commission abused its discretion. Citizens for Responsibility and Ethics in Washington, 236 F. Supp. 3d at 391. Both Commission counsel and CREW have accepted the district court’s formulation. We do not. The district court’s statement of law is inconsistent with the precedents of this court and of the Supreme Court. Our duty in conducting de novo review on appeal is to resolve the questions of law this case presents….

The district court’s statement embodies a contradiction: as the court put it, an agency has “absolute discretion” when it comes to enforcement decisions, but it is up to the court to decide whether the agency abused its absolute discretion. The Court in Chaney took notice of the same ostensible contradiction between the “abuse of discretion” standard in APA § 706 and § 701(a)(2)’s bar against review to the extent the action is “committed to agency discretion.” The Court then resolved the conflict on this basis: “if no judicially manageable standards are available for judging how and when an agency should exercise its discretion, then it is impossible to evaluate agency action for ‘abuse of discretion.’” Chaney, 470 U.S. at 830.

The FEC regulates in a very sensitive area – speech about government and election campaigns. Its jurisdiction is wrought with thorny First Amendment issues and is vulnerable to partisan complaints lacking merit or where investigations would not represent an efficient use of agency resources. Congress designed the enforcement process to prevent partisans from weaponizing the agency’s enforcement powers and avoid imposing undue burdens on protected speech. In bringing this case, CREW sought to privatize one aspect of the FEC’s enforcement function – dismissed complaints based on prosecutorial discretion in 3-3 ties.

The importance of this case lies with the finality of Commission decisions. It helps constrain private enforcement, which is likely to have ideological or partisan motivations. This case and the resulting precedent shuts down that possibility in this context. Judges Randolph and Kavanaugh correctly ruled courts must leave enforcement decisions to the Commission, where expertise and statutory balance can prioritize resources and help ensure that enforcement is viewpoint neutral.