My Speech is Good. Your Speech Should be Banned. 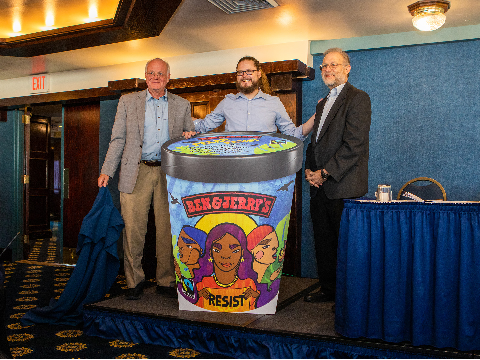 Ben and Jerry share a passion for ice cream.

If Ben and Jerry would like to put some of their money together to advocate on behalf of progressive candidates and causes, the First Amendment requires that they be free to do so, right?

Not according to Ben and Jerry – or the company they founded but no longer own, Ben & Jerry’s.

For years, Ben, Jerry, and the ice cream company sharing their name have been actively involved in efforts to abolish super PACs. A super PAC is nothing more than a group of Americans pooling resources to speak independently about candidates.

The company and its two founders also advocate for a far-reaching constitutional amendment to ostensibly overturn the Supreme Court’s decision in Citizens United v. Federal Election Commission. In that ruling, the Court held that nonprofits, businesses, and labor unions have a First Amendment right to independently voice their support or opposition to federal candidates.

The Vermont ice cream moguls sum up their opposition to Citizens United and super PACs with trite phrases such as “corporations aren’t people” and “money isn’t speech.”

It takes no mighty intellectual leap to realize the absurdity of using this logic to justify stripping all incorporated entities, along with other groups of Americans, of their constitutional rights. Corporations are, of course, made up of individual people. People do not simply lose their rights when they join together in a group. And while money obviously is not literally speech, any means of effective advocacy does require spending money.

In fact, Ben and Jerry’s actions (along with Ben & Jerry’s actions) contradict their words. They’ve joined with a progressive group to fund independent expenditures in support of candidates they’d like to see in Congress. Which is almost exactly the type of activity the Citizens United decision protects and for which super PACs are a vehicle.

To be fair, they’ve partnered with a traditional PAC, meaning the group isn’t a corporation and can’t accept corporate donations (although the group, MoveOn, does have a nonprofit corporate entity). Ben and Jerry are associating with the PAC in their individual capacities. But why would a well-funded, influential group like MoveOn agree to make expensive ads featuring two random guys telling viewers whom they should vote for? Well, because those two guys aren’t random: they started a massively successful ice cream company that bears their names and has national brand recognition. In other words, Ben and Jerry are using their company’s success to give themselves a platform for political speech most Americans will never have.

In case viewers don’t make the connection after hearing them say their names while holding an ice cream cone, the ads let them know that Ben and Jerry are “The Ice Cream Guys.” And when, in the middle of each ad, Ben and Jerry unveil the ice cream flavor created in support of the candidate, the artwork featured in the background is strikingly similar to the branded artwork featured on the Ben & Jerry’s pints consumers see on the shelves.

When speaking about the campaign to the national media, Ben Cohen says that they are supporting candidates that represent “Ben & Jerry’s values.” Maybe Cohen just likes referring to himself in third person. And maybe the reporter, given the understandable confusion, accidentally used the ampersand that appears in the brand name instead of the word “and.” Or maybe Cohen was referring to the progressive values the company has long supported.

In response to criticism that he is a wealthy businessman utilizing his company’s reputation to get a bigger platform to rail against other individuals and corporations exercising their First Amendment rights, Cohen has said, “You know, I think democracy is everybody’s business and everybody needs to get involved in it. I think if business only cares about money, and doesn’t care about democracy and freedom, I think our country is lost. It becomes tyranny.” This comment would seem to suggest that Cohen believes companies should be free to engage in civic discourse, speak out on behalf of their values, and support candidates that embody those values.

However, like many opponents of corporate speech rights, Cohen views himself and Ben & Jerry’s as the exception to the rule he supports for everyone else. As he sees it, Ben & Jerry’s has good values; therefore, there’s nothing problematic about its heavy involvement in issue advocacy. And Cohen himself is a rich guy with good political preferences; therefore, it’s fine if he uses his wealth and success in business to support candidates.

Not so for others. Most corporations, in Cohen’s view, only care about money. Therefore, we should change the Constitution to ban them from speaking about politics and elections.

For many on the political left, opposition to corporate speech rights, and the right to spend money on political speech generally, is underpinned by the misguided assumption that the elimination of such rights is the magic key to achieving a host of progressive policy goals. As Ben Cohen puts it, “[U]ntil we get rid of money in politics, we’re never going to get the environmental laws, financial laws or health-care laws we really need.” Setting aside the fact that election-related spending is by no means determinative of electoral outcomes, candidates and groups on the left are raising plenty of money relative to their opposition. And corporations account for a tiny percentage of election spending. Regardless, a belief that restricting certain rights will benefit your team is no justification for amending the Constitution to eliminate those rights.

Furthermore, many for-profit corporations besides Ben & Jerry’s are associated with left-leaning activism.

Ben Cohen may be surprised to learn that a company with political preferences very much in line with at least one tenet of “Ben & Jerry’s values” is currently exercising its First Amendment right to endorse candidates it believes will support policies the company cares about.

Patagonia, the outdoor clothing company, has endorsed two U.S. Senate candidates “because of the urgent and unprecedented threats to our public lands and waters.” The company is promoting these endorsements on its website, social media, and via e-mails to customers.

Prior to the Citizens United decision, such activity very likely would have landed the company in legal trouble. Ironically, both candidates the company has endorsed support a constitutional amendment to overturn the decision protecting Patagonia’s right to speak out in support of their campaigns.

As Patagonia and Ben & Jerry’s demonstrate, businesses often have values beyond just turning a profit. Often, those values align with the interests of their customers. That a company is able to speak up for those values, and even support candidates that stand for those values, is good for democracy. And even if a company supports or opposes a policy or a candidate due to the potential effects on its bottom line, that doesn’t mean the company should be banned from letting citizens know about it.

If a couple of guys who founded a popular ice cream brand want the country to hear their views about a few candidates, they have the right to associate with a political group for that purpose. If the company they started wants to create an ice cream flavor that promotes opposition to President Trump, who is also a candidate, it has the right to do that as well.

And if a group of people who make a living selling outdoor recreation apparel wants to support candidates who value preserving public lands, they have the same First Amendment right to do so. Furthermore, the American people have the right to hear the views of any speaker they wish.

Banning speech based on a speaker’s corporate identity is as misguided and unjust as banning Ben Cohen and Jerry Greenfield from appearing in political ads because they have a platform 99% of Americans will never have. And abolishing super PACs, far from lifting the voices of ordinary Americans, would achieve nothing more than the elimination of a vehicle by which citizens can join together to make their voices heard in competition with powerful politicians and big media corporations.

When introducing their anti-Trump ice cream flavor, Ben & Jerry’s CEO Matthew McCarthy said, “All of our employees here and around the world, all of the people we serve, are not only hoping, they are expecting us to speak up as businesses.”

Fortunately, the First Amendment protects the right of businesses and other groups of citizens to do just that: speak up.

Larry Lessig and the Barriers to Political Campaigning

“We’ve now created the green primary, where only the funders get to vote and they vote on who will have the money necessary to ...