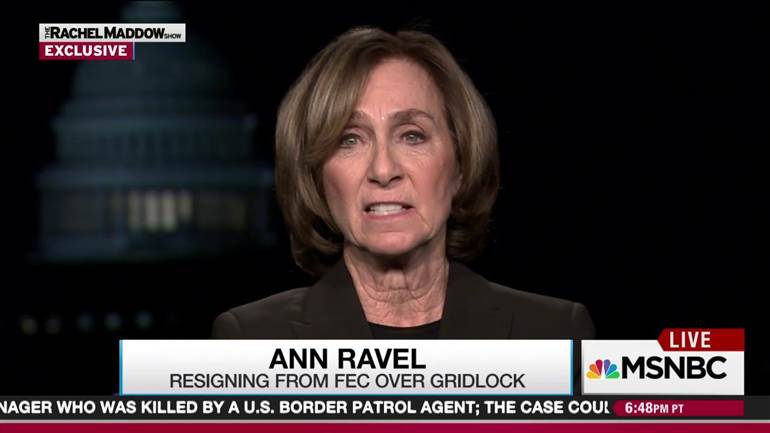 FEC Commissioner Ann Ravel announced over Presidents’ Day Weekend that she would resign from her post with only a few months left in her term. In an accompanying New York Times op-ed, she cited the “gridlock” on the Commission as a major reason for resigning and took some parting shots at her colleagues.

The first thing that’s evident about the Times’ piece is how much Ravel portrays herself as a martyr for bipartisanship and good governance. Her op-ed begins:

Nearly three years ago, during my tenure as vice chairwoman of the Federal Election Commission, I wrote in this newspaper that my own agency was failing to enforce campaign finance laws. My efforts to cooperate with the other commissioners to fulfill the agency’s mission had been thwarted, revealing an unfortunate truth: The F.E.C. was betraying the American public and jeopardizing our democracy.

It pains me to report that the agency remains dysfunctional, more so than ever, as I prepare to depart at the end of this month as my term nears its end.

She portrayed herself similarly during an interview this week with Bloomberg BNA:

In her first year at the FEC, Ravel said, she “crossed party lines” and voted with the three Republican FEC commissioners – Lee Goodman, Caroline Hunter and Matthew Petersen – to strike the corporate campaign spending rules overturned by Citizens United, as well as on nearly two dozen campaign finance enforcement cases.

“It didn’t take long to realize that wasn’t going to work,” Ravel said. She blamed her frustration on Republican colleagues, who came with “an ideological bent to ensure that the purposes of the agency were not fulfilled.”

What Ravel neglects to mention is that her first New York Times op-ed, in which she accused the FEC’s Republican Commissioners of actively undermining federal law, was written just six months into her term. Since that time, she has continued grandstanding via national newspapers, unprecedented procedural stunts on the FEC, and even comedy shows. All the while she was cultivating her own celebrity as a proponent of expansionist political speech regulation by the government.

Ravel’s narrative of ideological Republicans stifling cooperation on the Commission is therefore, in a word, bogus. She has played a central role in undermining the FEC’s legitimacy and increasing its partisan rancor. Her lasting legacy may well be making the work environment at the agency so toxic that its employee morale ranks abysmally among small federal agencies.

What are the concrete policy critiques that caused Ravel to claim the moral high ground, even while engaging in partisan warfare? She cites a few deadlocked cases whereby the Republican commissioners voted in line with the FEC’s General Counsel recommendation, the letter of the law, and judicial guidance. She touched on two bigger themes as well.

First, Ravel took the FEC to task for failing to halt the flow of “dark money” in elections. “Dark money” is a biased, misleading term for political spending by tax-exempt social welfare groups that are not required to report the private information of their supporters to the government. Despite the pervasive fearmongering surrounding the term, such spending has not amounted to more than 4.3% of all federal political spending in the last three election cycles – and accounted for a paltry 2.5% of spending in the 2016 cycle.

Still, Ravel declared, “the FEC’s mission is to ensure fairness in elections. One of its core responsibilities is to make sure that all money in political campaigns is disclosed.” In reality, the FEC’s mission is to enforce federal campaign finance laws, not to “ensure fairness” or even to disclose “all” money in political campaigns. So-called “dark money” is entirely separate from campaigns by definition, so it plainly falls outside her own description of the FEC’s mission. It is the IRS (for better or worse) and ultimately Congress that decide regulations for tax-exempt organizations, not the FEC. Ravel’s complaint here is essentially that the Commission did not unilaterally impose new rules and regulations outside of its organizational scope to regulate campaign finance.

Second, Ravel reiterated a tired attack on the FEC’s bipartisan structure as the enabler of alleged “gridlock” on the Commission. In reality, deadlocked votes on the FEC are relatively rare, but it is worth exploring why they are not necessarily bad. By law, the Commission is prohibited from having more than 3 sitting commissioners from any political party. This important safeguard prevents a single party from silencing the speech of its political opponents. Imagine if the FEC was comprised of 4 Republicans and 3 Democrats, and therefore could consistently levy fines against left-leaning political groups (or vice versa). This was an especially salient concern when the Commission was first formed in the aftermath of the Watergate scandal. So really, ties happen on the FEC when members from both parties cannot agree whether the facts of a complaint justify further investigation or punishment.

But Ravel dismissed the notion that gridlock can be a safeguard against government overreach:

[L]egislative history demonstrates that gridlock was not Congress’s intention. After Watergate, when Americans were outraged by the campaign finance violations of the Nixon administration, Congress established the F.E.C. to enforce the law fairly. The balance of party membership on the commission was seen as its virtue, to prevent partisan enforcement. Commissioners were expected to come to the table in good faith.

As we have seen in recent years, that was wishful thinking.

Ravel does not cite any specific “legislative history” that shows gridlock was contrary to the purpose of the FEC – after all, the ability for tied votes to occur was intentionally built into the Commission’s structure. Instead, she argues that her Republican colleagues, by disagreeing with the Democratic bloc of the FEC, are not acting “in good faith.” This implies that when the three Democratic appointees decide to vote a certain way, there is no way for them to be in the wrong. Even though gridlock by definition means equal votes on each side, she insists it is only the Republicans voting as a bloc that is unacceptable.

This is, of course, nonsensical. But it has been the crux of Ravel’s qualms with the FEC since she was first appointed. She concludes her piece by proposing solutions that would reduce or eliminate any intellectual diversity on the FEC – namely that President Trump clean house on the Commission to appoint several Ann Ravel clones, and that the courts begin intervening in complaints when the FEC deadlocks. The latter would be a significant departure from past practice.

With Ravel’s departure, the President has an opportunity to appoint a new member to the Commission. The least we can hope for is that her replacement has a sense of humility and respect for Americans’ political speech rights. As for Ravel, a former campaign finance regulator from California (where the process is extremely partisan, as CCP President David Keating points out), we can expect her ideological grandstanding to continue outside of the FEC.

The New York Times once again pulls out its Thesaurus of invective to tackle the issue of campaign finance reform.  Next time, we suggest they ...

On Wednesday, the Brookings Institution hosted an event entitled “Democracy at risk: Solving critical problems threatening U.S. elections.” It was billed as a discussion ...