Senator Klobuchar on Campaign Finance: An Admission Against Interest? 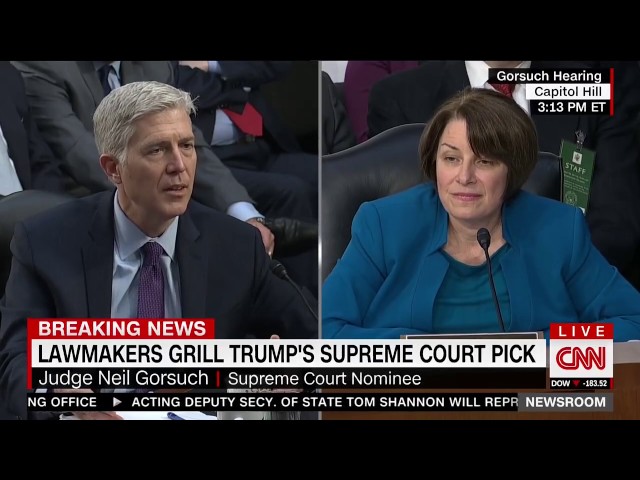 As most any law student can tell you, “strict scrutiny” is the toughest standard of judicial review in federal court. Normally, it applies whenever the government seeks to place limits on the exercise of a “fundamental right.” To survive “strict scrutiny,” a law must address a “compelling” government interest, and be “narrowly tailored” to address that problem.

Only that hasn’t been the case. Instead, the Court has been remarkably vague about the standard of review. In any case, it has upheld the constitutionality of most restrictions on contributions to candidate campaigns.

Which leads us to an episode in the confirmation hearings for Judge Neil Gorsuch’s nomination to the Supreme Court. Judge Gorsuch’s one opinion dealing with campaign finance is a concurring opinion in a case called Riddle v. Hickenlooper. (CCP’s analysis of Gorsuch’s concurrence and the case itself is here.) There, the Tenth Circuit panel, in a decision written by an Obama appointee, unanimously struck down a Colorado law that provided for higher contribution limits to major party candidates and lower contribution limits to minor party candidates. Judge Gorsuch, however, filed a concurring opinion, in which he began:

I confess some uncertainty about the level of scrutiny the Supreme Court wishes us to apply to this contribution limit challenge, but I harbor no question about the outcome we must reach. My colleagues are surely right that, as applied, Colorado’s statutory scheme offends the Constitution’s equal protection guarantee, whatever plausible level of scrutiny we might deploy.

Noting that the plaintiffs in the case urged the court to review under strict scrutiny, Gorsuch writes, “I don’t doubt this line of argument has much to recommend it. The trouble is, we have no controlling guidance on the question from the Supreme Court. And in what guidance we do have lie some conflicting cues.” He continues by noting that, “the Court has yet to apply strict scrutiny to contribution limit challenges – employing instead something pretty close but not quite the same thing.”

Judge Gorsuch then observes that this case hinges less on the First Amendment itself than on the Fourteenth Amendment’s equal protection clause:

[W]hatever level of scrutiny should apply to equal infringements of the right to contribute in the First Amendment context, the strictest degree of scrutiny is warranted under Fourteenth Amendment equal protection doctrine when the government proceeds to discriminate against some persons in the exercise of that right. On this account, there is something distinct, different, and more problematic afoot when the government selectively infringes on a fundamental right.

Gorsuch’s Democratic inquisitors have been attacking this opinion, suggesting it shows that maybe he believes that strict scrutiny should apply to campaign finance limits challenged under the First Amendment. And on this point, Senator Amy Kobluchar (D. Minn.) attempted to pounce:

Notice the implicit admission against interest in Klobuchar’s question – she believes that limits on contributions infringe on First Amendment rights, and if strict scrutiny is applied, as is normally the case, laws limiting this form of political participation would likely be found unconstitutional.*

In essence, then, she is asking that the Court ignore general rules of First Amendment jurisprudence to get to the result she wants. We have no idea how Judge Gorsuch feels about this, beyond his opinion in Riddle and his answer to Senator Klobuchar. But it is a telling admission that campaign contribution limits cannot stand up to traditional First Amendment analysis. As one commentator has noted, because “contribution limits do not seem to be narrowly tailored to the problem of eliminating corruption, the Court simply lowered the bar” to uphold those limits, by avoiding the usual “strict scrutiny” analysis.

Of course, maybe campaign finance laws are different, and the usual First Amendment analysis should not apply. But it’s telling to see it admitted, so readily, that these laws would not normally pass the High Court’s First Amendment jurisprudence.

*If you watch the video, which is just under eight minutes long, through the 5:30 mark, you’ll notice how Senator Klobuchar desperately tries to avoid discussing the facts of Riddle. This is because the facts are overwhelmingly sympathetic to the plaintiffs – candidates representing smaller parties face stricter limits than candidates of bigger parties. Thus, the result contradicts another narrative that the Democrats have been trying, the idea that Judge Gorsuch rules against “the little guy.” Here, it is Senator Klobuchar who is disturbed by Judge Gorsuch’s opinion ruling for “the little guy,” against the established major parties.

In the final two minutes Senator Klobuchar discusses the Hobby Lobby case, another case in which she apparently wanted the courts to rule for the big player (the U.S. government) against the smaller guy (the family-owned business). But that really goes beyond our brief here at CCP.

The Free Speech Record of Judge Brett Kavanaugh, Part I

Hon. Brett Kavanaugh United States Court of Appeals for the District of Columbia Circuit (2006-Present) This post is the first in a series exploring ...