When Gridlock is Good 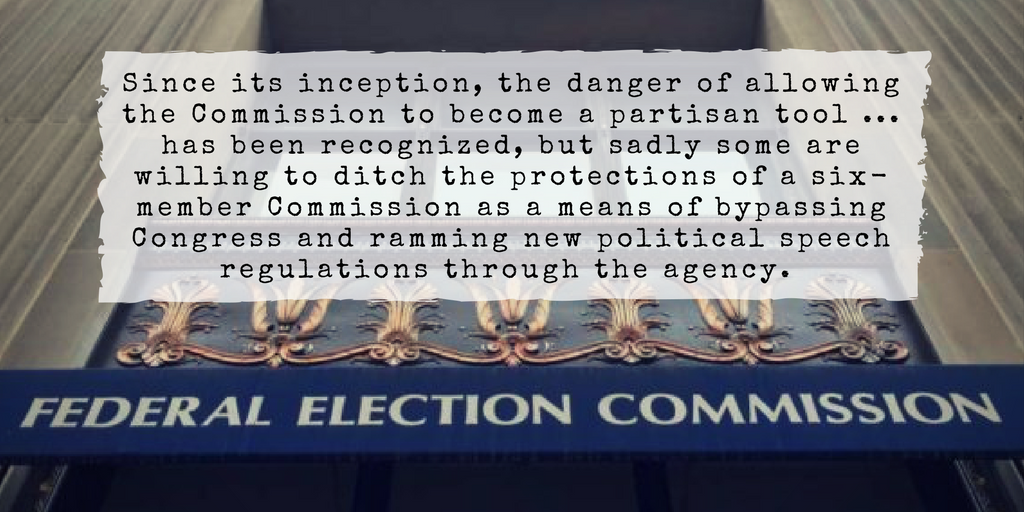 In recent months, a handful of members on both sides of the aisle in the House of Representatives have proposed legislation to change the structure of the Federal Election Commission (FEC) under the guise of reform. On August 1, Indiana Senator Joe Donnelly announced companion legislation in the Senate that would revamp the FEC, which he believes has been “undermined by gridlock.” Among other changes, one of the key provisions of the bill would reduce the number of FEC commissioners from six to five.

The architects of the FEC designed the Commission with fresh memories of the attempts made by former President Nixon’s Department of Justice to silence critics through campaign finance regulations. To that end, the Commission was purposefully structured with six commissioners (with no more than three from any one political party) to ensure that one party was not able to impose new regulations or open investigations on its opponents without some bipartisan support. 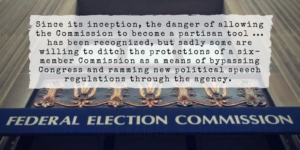 Since its inception, the danger of allowing the Commission to become a partisan tool for manipulating campaign finance law and silencing political opponents has been recognized, but sadly some are willing to ditch the protections of a six-member Commission as a means of bypassing Congress and ramming new political speech regulations through the agency.

“Reformers” assert that the risk of partisan control of the Commission is mitigated in their bills because “[o]nly two of the five members could be of the same political party, thereby ensuring at least one independent would be on the commission at any given time.” The thought here is that because no more than two registered members of one party can be on the FEC at once, commissioners would have to cooperate to reach a majority on any given agenda item. But ideology runs deep and often supersedes party affiliation. As is the case with most independent voters, it is likely that even a registered Independent, Libertarian, or Green Party commissioner would reliably align with the philosophy of the appointees of one of the two major parties.

As currently structured, the Commission’s bipartisanship is better protected. Although the president could technically appoint an “Independent-in-name-only,” norms have dictated that congressional leadership in the minority pick their party’s commissioners to avoid gaming the system in this manner. Indeed, with all six commissioners eligible for replacement, there have been worries that President Trump could place an independent or moderate on the FEC, but these longstanding norms would make doing so a tough sell. If passed, these bills would create new norms that could potentially (or likely) allow for more partisan shenanigans and manipulation to occur when appointing commissioners to the FEC.

Another facet of the legislation creates a “Blue Ribbon Advisory Panel” appointed by the president and comprised of “retired Federal judges, former law enforcement officers, or individuals with experience in election law” that would publicly recommend nominees to the president to fill vacancies on the Commission. Superficially, this sounds like a nice gesture. However, as the panel is being appointed by the president, what’s to stop him or her from appointing members who share the same views on how best to interpret and apply political speech regulations, ultimately leading to the eventual nomination of a commissioner who would mirror the president’s philosophy on campaign finance issues?

As written, these bills don’t even bind the President to accept the recommendation of the Blue Ribbon Advisory Panel. The only stipulation is that the Panel’s choice is publicly announced. While it would likely be an unpopular move, the President could instead fill the post with someone of their own choosing. Even if they could not appoint a registered member of their party, it would not be difficult to find a reliable philosophical ally without a “D” or “R” attached to their name.

Senator Donnelly has justified his bill by asserting that the legislation would “allow the Federal Election Commission to more effectively carry out its mission,” after “30 percent of all substantive enforcement decisions by Commissioners resulted in a stalemate” in 2016. Though the figure Donnelly cites is one misleading estimate, if you look closely at the actions taken by the Commission, the claims of gridlock and stalemate are blown way out of proportion. In 2014, the FEC achieved bipartisan consensus on 93% of all votes, and an 86% rate of bipartisan approval on substantive matters. An agency that reaches a stalemate on only 14% of cases dealing with substantive issues is far from wildly ineffective.

The FEC’s six-member structure ensures bipartisan support is needed on any new regulation passed or complaint brought before the Commission. While reducing the number of commissioners to five would surely make it easier to pass new rules or issue judgements, it would also make it just as easy for partisan politics to trample our First Amendment rights. As former FEC Chair and CCP Chairman and Founder Bradley A. Smith explains, “Bipartisanship is not easy… [b]ut for 40 years, Republicans and Democrats were able to do it. Throwing that away…is reckless and an enormous threat to the First Amendment.”

The fact is the regulations on political speech adopted by the FEC do constitute a limitation on Americans’ First Amendment rights. The power of an unelected regulatory agency to interpret and apply regulations that limit speech in an election is substantial, and should not be dominated by one party over another. Senator Donnelly’s proposal would only undermine the Commission’s legitimacy. FEC regulations carry weight because they are perceived to be free of partisan favoritism, and hold both sides accountable.

If the goal is, as sponsors of this legislation avow, to get the FEC “back to weeding out campaign finance abuse and holding those who skirt the rules accountable,” it would be ineffective to weaken the Commission’s ability to accomplish just that. Certainly, it can be frustrating to read about gridlock, but the claims surrounding differences of opinion at the FEC are blown way out of proportion. Reaching an impasse on 14% of substantive decisions seems reasonable when debating the extent to which an unelected body can limit citizens’ political speech rights. If this is what Senator Donnelly and others call gridlock, I for one, am grateful for the delay.

Melanie Sloan today took an unethical shot at Federal Election Commissioner Donald McGahn, writing in Politico that he “has boasted, ‘I’m not enforcing the ...