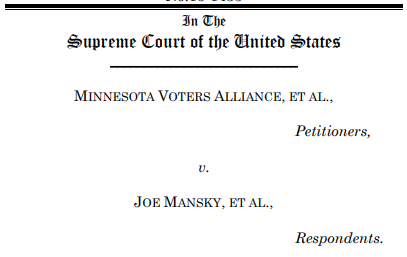 The Institute has urged the Supreme Court to strike down overbroad speech restrictions at the voting booth in Minnesota. In the case, Minnesota Voters Alliance, et al. v. Mansky, et al., the Eighth Circuit upheld a law prohibiting a voter from wearing a T-shirt that depicted the Gadsden flag, the historic American emblem depicting a coiled rattlesnake and the words, “don’t tread on me.” Minnesota argued, and the Eighth Circuit agreed, that apparel displaying a political message would cause chaos at the polling place. The Institute for Free Speech has asked the Supreme Court to correct this error. As the brief argues, “[the Supreme Court’s] storied precedents have long preserved and celebrated the right of Americans to wear political messages.”

Amicus Brief on the Merits

Amicus Brief on Petition for a Writ of Certiorari