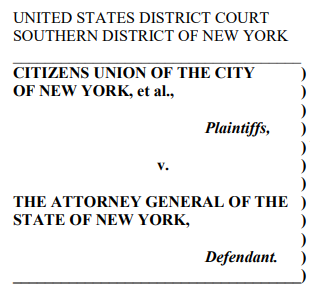 Our Constitution guarantees all Americans the right “to pursue their lawful private interests privately and to associate freely with others in so doing.” NAACP v. Ala. ex rel. Patterson, 357 U.S. 449, 466 (1958). By contrast, “[d]isclosure chills speech,” Van Hollen v. Fed. Election Comm’n, 811 F.3d 486, 488 (D.C. Cir. 2016), and threatens the “guaranteed…right to express any thought, free from government censorship.” Police Dep’t of Chi. v. Mosley, 408 U.S. 92, 96 (1972). Consequently, “state scrutiny” and publication of individuals’ nonprofit affiliations is presumptively unconstitutional because it harms the “vital relationship between freedom to associate and privacy in one’s associations.” NAACP, 357 U.S. at 466; id. at 462.

Courts must apply a rigorous form of review whenever a state seeks to pierce the veil of associational privacy. Historically, only a few public disclosure regimes have survived this exacting scrutiny. Compelled disclosure has been permitted where it directly targets the financial constituencies of candidates for office, see Buckley v. Valeo, 424 U.S. 1, 81 (1976) (per curiam), or the financial “disclosure of…direct pressures, exerted by” lobbying operations. United States v. Harriss, 347 U.S. 612, 620 (1954).

New York Executive Laws § 172-e and § 172-f (“the Law”) make no serious effort to stay within these constitutional bounds. Instead, those provisions indiscriminately target nonpartisan and even entirely nonpolitical nonprofit corporations. Going far beyond any other measure in the Nation, the Law aggressively seeks to publicize the identities of charitable donors based upon factors entirely out of the regulated nonprofits’ control, and in situations where the disclosed donor will very often have had little or no connection to the regulated communications.

The Law, then, constitutes an unprecedented violation of Americans’ right to private association. It can only reduce the quantity and quality of both charitable works and “completely nonpartisan public discussion of issues of public importance.” Buckley v. Valeo, 519 F.2d 821, 870 (D.C. Cir. 1975) (en banc).