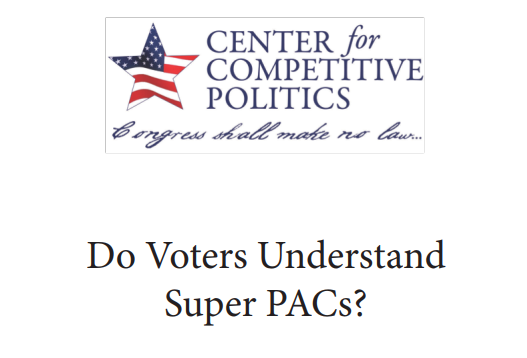 Two years and two election cycles into the Super PAC era, the media firestorm against free speech and association has been palpable. A Google search of the term “Super PAC” reveals dozens of articles warning about the evils of such entities and their supposed negative impact on democracy. In this Issue Review, Jason M. Farrell analyzes poll results conducted by Public Opinion Research in January 2012 to gauge public awareness of Super PACs and the origins, functions, and laws regulating these entities.

Many news accounts mislead or confuse readers about a number of facts related to Citizens United, SpeechNow.org, and their relationship to Super PACs and political speech. The New York Times had published so many stories that came under harsh criticism that the paper’s Public Editor, Arthur S. Brisbane, had to write an essay addressing the “intense” controversy over the paper’s coverage. Much reporting also incorrectly leaves readers with the impression that Super PACs do not disclose their donors. For example, a USA Today Editorial used the misleading title “Disclose donors on Super PAC ads,” seemingly implying it wasn’t already happening.

Given the confusion over the origins, functions, and reporting obligations of Super PACs in the media, it may be a safe assumption that the public is likewise confused. CCP enlisted Pulse Opinion Research to conduct a poll in January 2012 to gauge public awareness of some of these issues.

Those surveyed clearly believe the media is influencing the vote, which is exactly what Super PACs do, but the media has essentially no limit on coordination or disclosure requirements on their advocacy for or against candidates. Nearly a majority of likely voters are wrong about current disclosure requirements for Super PACs, and this calls into question the significance of results of other public opinion polls on the Citizens United decision. Many voters may also believe incorrectly that corporations can donate directly to campaign committees. The results are illuminating in highlighting public confusion on this issue.

Money from Exxon, Goldman Sachs, Pfizer and the rest of the Fortune 500 is already corroding the policy making process in Washington, state capitals and ...

In the much discussed Citizens United v. FEC case, the Supreme Court overturned existing prohibitions on corporate political expenditures and recognized that outright prohibitions on ...