First National Bank of Boston v. Bellotti: Protecting the Right to Hear Others 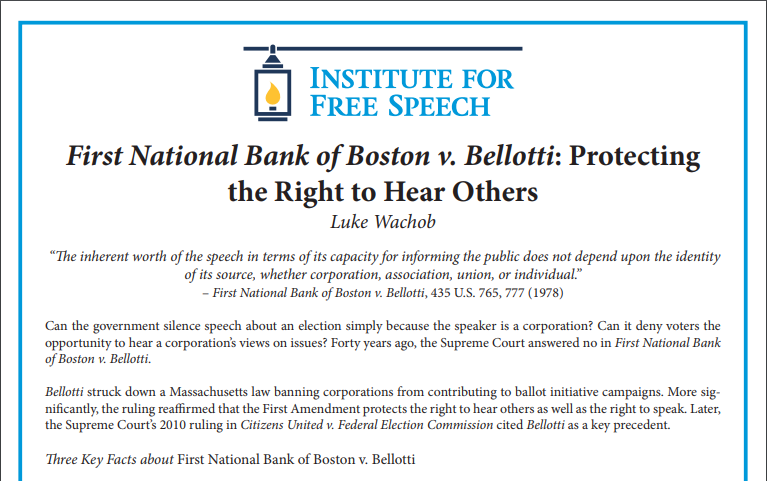 “The inherent worth of the speech in terms of its capacity for informing the public does not depend upon the identity of its source, whether corporation, association, union, or individual.”
– First National Bank of Boston v. Bellotti, 435 U.S. 765, 777 (1978)

Can the government silence speech about an election simply because the speaker is a corporation? Can it deny voters the opportunity to hear a corporation’s views on issues? Forty years ago, the Supreme Court answered no in First National Bank of Boston v. Bellotti.

Bellotti struck down a Massachusetts law banning corporations from contributing to ballot initiative campaigns. More significantly, the ruling reaffirmed that the First Amendment protects the right to hear others as well as the right to speak. Later, the Supreme Court’s 2010 ruling in Citizens United v. Federal Election Commission cited Bellotti as a key precedent.

I. The Massachusetts Legislature wanted to silence corporations because voters kept agreeing with them.

The reason corporations were silenced in Massachusetts was because they were effective at rallying public opposition to laws passed by the Legislature. The conflict began in 1962 with a proposed state constitutional amendment to permit a graduated income tax. The amendment needed voter approval to become law, and legislators were eager to see it pass.

The Legislature tried to stop corporations from spending any money to oppose the tax, but lost in state court.[1] They lost again on Election Day, as voters rejected the tax. Throughout the 1960s and 1970s, the Massachusetts Legislature repeatedly proposed its income tax amendment and passed laws banning corporations from opposing it. Each time, the tax lost with voters, and the bans lost in court.[2]

Eventually, the Legislature passed the law that would make its way to the Supreme Court in 1978. It too was struck down in a ruling that rebuked the state’s motive for passing it. “[W]here, as here, the legislature’s suppression of speech suggests an attempt to give one side of a debatable public question an advantage in expressing its views to the people, the First Amendment is plainly offended,” the Court explained.[3]

Bans on corporate speech are often portrayed as protecting the speech of real people. But the Massachusetts law demonstrates that corporations and people can be on the same side. In those instances, restricting corporate speech becomes a tool for politicians to thwart the will of the voters.

II. The First Amendment protects the right to hear others as well as to speak.

Key to the Court’s ruling in Bellotti was a recognition that Americans have a First Amendment right to hear the views of others, including corporations. Justice Lewis Powell’s majority opinion explained that speech is worthy of protection independent of the identity of its source. That’s because speech furthers broader societal interests, such as the free flow of information.

“The First Amendment, in particular, serves significant societal interests. The proper question therefore is not whether corporations ‘have’ First Amendment rights and, if so, whether they are coextensive with those of natural persons. Instead, the question must be whether [the law] abridges expression that the First Amendment was meant to protect. We hold that it does.”[4]

Citing a litany of past cases involving speech by corporations, the decision observed that restrictions on corporate speech impede “public access to discussion, debate, and the dissemination of information and ideas.”[5] In other words, restrictions on speech violate not only the right of the speaker, but also the right of those who wish to hear the speech.

In fact, the Supreme Court relied on Bellotti for part of its Citizens United ruling. Quoting from Bellotti, Justice Anthony Kennedy’s opinion in Citizens United noted that “[p]olitical speech is ‘indispensable to decisionmaking in a democracy, and this is no less true because the speech comes from a corporation rather than an individual.’”[7] Citizens United was no aberration. It stands on the shoulders of a long line of precedent, including Bellotti.

First National Bank of Boston v. Bellotti marks an important milestone in First Amendment history. The ruling recognized that voters benefit when there is more speech about elections, and that the First Amendment protects the right to hear others. It stated clearly that speech does not lose its constitutional protection simply because the speaker is a corporation. The Court’s decision also laid important groundwork for later gains in free speech rights, most famously Citizens United.

Debates over the extent and regulation of political speech rights should not ignore Bellotti. It played a major role shaping those rights – including the right to hear others.

The Senate Judiciary Committee will soon hold a hearing on S.J. Res. 19, a constitutional amendment to restrict First Amendment rights proposed by Senator ...

The product of a 2010 court ruling, “super PACs” have been a boon to citizens wishing to more effectively speak about elections. Legally, they ...