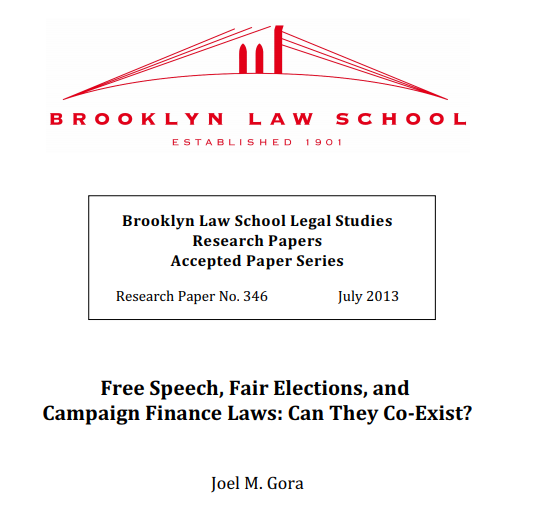 A prominent politician once observed that, “You can either have free speech or fair elections, but you can’t have both.” In this article, CCP Academic Advisor and Professor of Law at Brooklyn Law School Joel M. Gora argues that saying has it all backwards. In fact, you cannot have one without the other. The election of 2012 tested that thesis because it was the most expensive federal election in history and it contained what many claimed was a great deal of allegedly “negative” campaign speech and rhetoric. Gora argues that, under the First Amendment, election speech is supposed to be “uninhibited, robust and wide-open” and unrestrained in both quantity and content. Accordingly, the increase in campaign spending and activity by candidates, parties, non-profit organizations, labor unions, corporations, and so-called “Super PACs” is a good thing for free speech principles and democracy, not a bad thing, and efforts to impose greater limitations on campaign funding should be opposed. The same is also true for the supposed increase in the “negative” nature of the content of much campaign speech. There too a proper view of the First Amendment would applaud and encourage such robust debate about core issues of governance. The article concludes by advocating a number of reforms, which will make our electoral speech even more vigorous than it is now.

Money’s Not Enough: The Stories Behind 2020 U.S. House Primary Money-Upsets