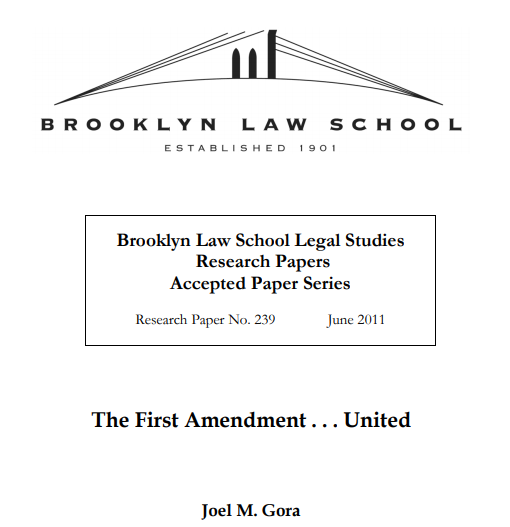 In this article, CCP Academic Advisor Joel M. Gora, a Professor of Law at Brooklyn Law School, offers a through recounting of the outcomes of the much maligned Supreme Court case, Citizens United v. Federal Election Commission. The article defends the case by highlighting the Court’s endorsement of First Amendment protections for the political speech of corporate, labor, and non-profit entities. In doing so, the Court reversed statutes which had previously made it illegal for these groups to speak out in elections. Aside from several more minor immediate effects, Gora explains that the lasting legacy of Citizens United lies in its enthusiastic support for the First Amendment. While overviewing the arguments of the “reformers,” who wish to regulate the political speech of the aforementioned entities, the article illustrates the deficiencies of their viewpoints when weighed against long-standing First Amendment principles. Ultimately, Gora predicts that the Citizens United decision will enable the further erosion of current speech-chilling regulatory measures—a legacy of the “reformers'” stamp on the existing campaign finance landscape.

In the much discussed Citizens United v. FEC case, the Supreme Court overturned existing prohibitions on corporate political expenditures and recognized that outright prohibitions on ...

Move to Defend: The Case against the Constitutional Amendments Seeking to Overturn Citizens United