The Truth About “Microtargeting” and Political Speech: Why a Ban Is a Bad Idea 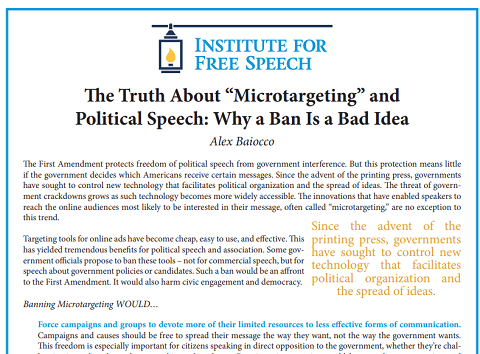 Editor’s Note: For a related discussion of the benefits of “microtargeting” to free speech and democracy, please consult the Institute’s Explainer, “Benefits of “Microtargeting”: Why Online Ad Targeting Tools Are Good for Free Speech and Democracy,” here.

The First Amendment protects freedom of political speech from government interference. But this protection means little if the government decides which Americans receive certain messages. Since the advent of the printing press, governments have sought to control new technology that facilitates political organization and the spread of ideas. The threat of government crackdowns grows as such technology becomes more widely accessible. The innovations that have enabled speakers to reach the online audiences most likely to be interested in their message, often called “microtargeting,” are no exception to this trend.

Targeting tools for online ads have become cheap, easy to use, and effective. This has yielded tremendous benefits for political speech and association. Some government officials propose to ban these tools – not for commercial speech, but for speech about government policies or candidates. Such a ban would be an affront to the First Amendment. It would also harm civic engagement and democracy.

Force campaigns and groups to devote more of their limited resources to less effective forms of communication. Campaigns and causes should be free to spread their message the way they want, not the way the government wants. This freedom is especially important for citizens speaking in direct opposition to the government, whether they’re challenging incumbent lawmakers or seeking policy change. Banning microtargeting would force speakers to waste time and money reaching citizens unlikely to be interested in supporting their mission.

Protect incumbents. Incumbents already have name recognition, media access, and a robust fundraising base. Challengers often have few, if any, of these assets when they begin their campaign. Microtargeting makes it easier for challengers to become competitive relatively cheaply. Consequently, prohibiting ad targeting will harm challengers while benefiting incumbents.

Harm upstart campaigns and grassroots movements. The ability to target ads is most essential to political newcomers and grassroots movements. Such campaigns and advocacy efforts often begin with few resources. They need to reach potential supporters cost-effectively to raise funds and increase membership. Banning microtargeting would make these efforts more expensive and less effective. This would inhibit the potential for impactful, ground-up political and social change movements.

Inhibit small-dollar and grassroots fundraising. The last several years have seen an enormous increase in small-dollar donations to both candidates and independent groups. Targeted fundraising appeals online are a significant reason for this shift. Banning microtargeting would make it harder for campaigns and groups to raise funds from small donors.

Like the impulse of those in power to control political speech, the peddled justifications for such control haven’t changed much over time. Government actions against Americans touted as necessary to combat foreign influence, false speech about the government, and divisive political expression have been the source of First Amendment violations throughout our nation’s history.

A ban on online targeting tools would repeat this sordid history. Indeed, proponents offer the same justifications. But there is already a ban on all political ads funded by foreign nationals. And the Supreme Court has made clear that the existence of false and divisive statements in political debate does not justify government suppression of speech. In fact, controlling speech in order to uphold government-sanctioned “truth” and the appearance of national unity is a hallmark of our authoritarian foreign adversaries.

Beyond the constitutional infirmities of anti-targeting proposals, such policies wouldn’t even achieve the goals articulated by their proponents.

NOT address foreign interference. Political ads funded by foreign nationals are already illegal in the United States. Several agencies enforce this ban, which carries criminal penalties. Preventing Americans from using this important tool for civic engagement won’t stop illegal foreign interference, but it will make it harder for Americans to talk to each other. In 2016, for example, foreign actors primarily utilized organic content, not ads, on social media. And the miniscule amount they did spend on ads made little use of microtargeting. Banning the use of targeting tools would overwhelmingly harm Americans’ advocacy efforts, not those of foreign governments. A ban would also perversely realize our foreign adversaries’ goals by harming Americans’ speech and association rights, thereby undermining American democracy.

NOT enhance the quality or truthfulness of speech. Like just about every other proposed form of political speech regulation, restricting targeting is touted as a means of making speech “better.” But what regulation has ever curtailed mudslinging? It’s not the role of government to try to influence the content of political speech. Negative and contentious advertising occurs on all types of media. Such ads are not unique to the internet or targeted online ads. By allowing speakers to reach Americans on the issues they care about most, microtargeting encourages more substantive, policy-focused ads as opposed to broad appeals often intended to evoke an emotional response.

NOT reduce divisiveness or promote national unity. Microtargeted ads do not themselves create disagreement among Americans. And banning these ads would not manufacture consensus. The entire concept of targeted advertising relies largely on preexisting differences of opinion or at least the assumption that certain citizens are more likely to agree with a particular message. Instead of fueling divisiveness, microtargeting fosters united action among citizens with common goals. Freedom of association requires that candidates and causes be free to focus communication and organizing efforts on those most likely to support their agendas. In fact, this has always been common practice for even the most low-tech means of politicking, such as canvassing, pamphlets, and direct mail.

NOT end the practice of targeting political messaging. In reality, a ban would just limit the use of microtargeting techniques to only the most well-funded campaigns that can afford to build or purchase detailed data sets. High-budget campaigns can and have used voter files and complex modeling to target small subsets of voters, without the need to utilize the targeting tools offered by online platforms. Even with a ban on microtargeting, sophisticated campaigns would almost certainly find ways to achieve their targeting goals, while upstart and grassroots campaigns would be inhibited from engaging in comparably effective outreach. Furthermore, targeted political ads are by no means limited to the internet, as other significantly more expensive mediums like TV and radio offer various targeting techniques.

Be on the Lookout: Four Red Flags in Bills that Will Chill Online Speech

The Internet and social media outreach are more important than ever to campaigns. As a result, legislators face a temptation to regulate this growing ...