Benefits of “Microtargeting”: Why Online Ad Targeting Tools Are Good for Free Speech and Democracy 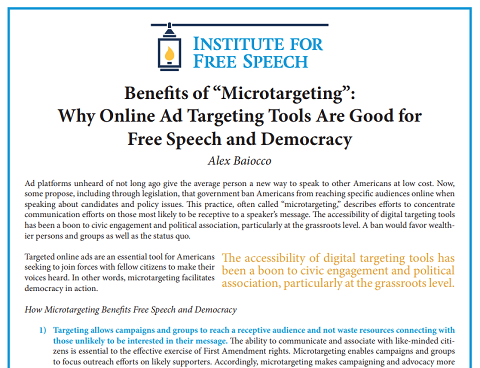 Editor’s Note: For a related discussion of what a proposed ban on “microtargeting” would and would not accomplish, please consult the Institute’s Explainer, “The Truth About “Microtargeting” and Political Speech: Why a Ban Is a Bad Idea,” here.

Ad platforms unheard of not long ago give the average person a new way to speak to other Americans at low cost. Now, some propose, including through legislation, that government ban Americans from reaching specific audiences online when speaking about candidates and policy issues. This practice, often called “microtargeting,” describes efforts to concentrate communication efforts on those most likely to be receptive to a speaker’s message. The accessibility of digital targeting tools has been a boon to civic engagement and political association, particularly at the grassroots level. A ban would favor wealthier persons and groups as well as the status quo.

Targeted online ads are an essential tool for Americans seeking to join forces with fellow citizens to make their voices heard. In other words, microtargeting facilitates democracy in action.

1) Targeting allows campaigns and groups to reach a receptive audience and not waste resources connecting with those unlikely to be interested in their message. The ability to communicate and associate with like-minded citizens is essential to the effective exercise of First Amendment rights. Microtargeting enables campaigns and groups to focus outreach efforts on likely supporters. Accordingly, microtargeting makes campaigning and advocacy more effective and less expensive.

2) Ad targeting makes politics more personal. Candidates can reach voters on the issues they care about. Advocacy groups can reach citizens who believe in their mission. Many voters are passionate about only a handful of issues. Microtargeting allows campaigns to speak to voters about those topics. Similar to how candidates speaks at town halls focused on a single policy issue, targeting enables candidates to share their views on specific issues that the targeted audience cares about most. Likewise, many advocacy groups focus on a single issue or category of issues. Ad targeting allows these speakers to reach Americans who may be interested in supporting or opposing a bill, joining the group, or contributing to the cause. This benefits the exercise of associational rights and civil society generally.

4) Ad targeting fosters viewpoint diversity and challenges to the status quo. Political and social change movements often begin with a small group of passionate proponents. Their views may be unpopular, unknown, or both. In order to boost their chances of making an impact, they need to connect with like-minded citizens and organize effectively. Targeting tools make these activities possible at much lower cost, which is especially important for new or loosely organized coalitions with limited resources. Microtargeting also increases the potential for rapid growth of a movement, which is essential for particularly time-sensitive policy concerns and for bringing attention to an issue during a specific election cycle. Furthermore, microtargeting makes it feasible for candidates to address the interests and concerns of smaller groups of Americans.

5) Targeting methods allow campaigns and groups to communicate directly with non-English speakers. The idea that political messages shouldn’t be tailored to specific audiences assumes we’re all speaking the same language. The ability to reach citizens with messages in their first language increases civic engagement and political participation among non-English speakers. Without the ability to target audiences based on language preferences, many campaigns and groups will be significantly less likely to spend resources on non-English language ads.

6) Ad targeting is most valuable to low-budget campaigns and grassroots movements. Upstart candidates and citizen-driven movements often rely on low-cost, targeted ads to build support and associate with allies. Banning such ads would make it more difficult and more expensive for political newcomers to compete with incumbents and well-funded opponents, who possess the name recognition, connections, and funding necessary to easily spread their message. Similarly, grassroots movements would have a harder time connecting with supporters and organizing effectively. Online ad targeting is a vital tool of bottom-up political and social change.

7) Microtargeting aids small-dollar and grassroots fundraising. Funding appeals in online ads have been a boon to small-dollar fundraising for both candidates and independent groups. Online fundraising has enabled more candidates to raise enough money to run competitive campaigns without the need to seek out large donations. The ability to cost-effectively pursue Americans who are at least somewhat likely to contribute has played a significant role in this trend. For the same reasons, easily accessible, low-cost targeting methods have also been essential to the fundraising efforts of grassroots advocacy groups.

8) Online targeting tools enhance voter interest and help drive voter turnout. When campaigns are able to speak to citizens about the issues they care about most, citizens are more likely to stay engaged and vote. Often, an ad’s chief purpose is to convince citizens who already support the candidate’s agenda to take the time to vote for the candidate. Voter turnout efforts are more effective when campaigns can target those most likely to agree with the candidate’s views on policy. Targeting enhances civic engagement and broadens participation in democracy.

Data-driven advocacy is nothing new. It’s been used for years in all other forms of political and non-political advertising. And it has benefited free speech and democracy. Canvassing, direct mail campaigns, phone banking, and just about every other means of political communication are targeted in some way. Campaign representatives don’t knock on every door or call every household. And mailers rarely appear in every registered voter’s mailbox. Instead, campaigns use information on party affiliation and voting habits to target potential supporters. Similarly, print, radio, and TV ads often appear in publications or on channels that appeal to citizens most likely to support the candidate or group’s platform. Focusing communication efforts on like-minded citizens is an essential feature of coalition building. It’s also a basic exercise of First Amendment rights. That’s no less true simply because the speech occurs online. Restrictions on targeted political speech on the internet infringe upon these rights and harm civic engagement.

The First Amendment is facing a new threat in state legislatures. A spate of bills that would regulate political and issue advertising on the ...