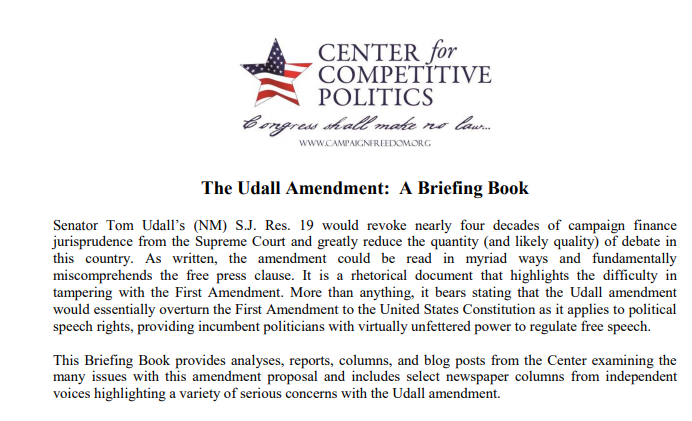 Senator Tom Udall’s (NM) S.J. Res. 19 would revoke nearly four decades of campaign finance jurisprudence from the Supreme Court and greatly reduce the quantity (and likely quality) of debate in this country. As written, the amendment could be read in myriad ways and fundamentally miscomprehends the free press clause. It is a rhetorical document that highlights the difficulty in tampering with the First Amendment. More than anything, it bears stating that the Udall amendment would essentially overturn the First Amendment to the United States Constitution as it applies to political speech rights, providing incumbent politicians with virtually unfettered power to regulate free speech.

This Briefing Book provides analyses, reports, columns, and blog posts from the Center examining the many issues with this amendment proposal and includes select newspaper columns from independent voices highlighting a variety of serious concerns with the Udall amendment.

Separation of Campaign and State

In a pair of recent decisions, Davis v. FEC and Arizona Free Enterprise Club’s Freedom Club PAC v. Bennett, the Supreme Court has struck down on ...