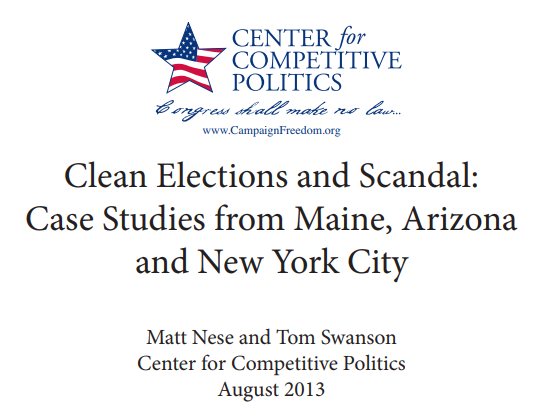 Note: This report is an updated version of an Issue Review originally published by the Center for Competitive Politics in September 2011. This version has been edited to include updates to previously reported cases of public corruption in Arizona, Maine, and New York City as well as to incorporate information on new abuses of taxpayer dollars since this report’s initial publication.

On June 27, 2011, The U.S. Supreme Court ruled in Arizona Free Enterprise Club’s Freedom Club PAC v. Bennett that a portion of Arizona’s tax-financed campaign law was unconstitutional. Specifically, the Court declared the use of “matching funds,” where a privately financed state candidate could trigger state-granted matching funds for any tax-funded opponent if he or she spent above a certain threshold or if an independent group spent money in the race, an unconstitutional demand on a candidate whose speech would be chilled by the mandate.

The ruling was greeted with horror by a number of pro-regulation groups such as Common Cause, which wrote: “The provision struck down by the court actually increased free speech, helped to prevent the corruption and the appearance of corruption that can accompany private campaign contributions, and did so in a fiscally responsible manner…” The presumption, however, that “clean elections” (i.e. taxpayer funded) campaign systems have been an effective firewall against corrupting influences in the political process has little basis in fact. The reality is that “clean elections” laws often favor corrupt incumbents against upstart challengers; enable fraudulent activity in elections by facilitating new and creative forms of corruption in the realm of campaign finance; provide for the waste of public money on non-serious candidates; and create cumbersome and onerous filing and reporting requirements for both participants and non-participants alike.

Though the dollar-for-dollar “matching funds” systems present in many states are now fading from use, New York City’s “super match,” where candidates receive up to six dollars in contributions from the government for every dollar they raise themselves is being hailed as the new gold standard of campaign finance by many in the pro-regulation bloc. Ironically, this program exists in the city with one of the worst corruption records in the U.S., calling into question exactly whether these programs produce “clean” public officials. This report will show how a number of candidates and their associates, in Arizona, Maine, and New York City, willfully abused the campaign finance system; exploited loopholes within these programs, which ensured they could keep much of their donation money off the books; and, once in office, repeatedly further abused public funds, often finding themselves investigated for – or convicted of – criminal conduct.

New York City’s matching funds system has been in place for 25 years and remains one of the oldest such program in the country; both Arizona and Maine’s tax-financing systems have been in operation since 2000, providing enough time to analyze their history, along with their successes and pitfalls. They are also the first three programs in the U.S. established to pay for a majority of a candidate’s campaign expenses, leaving them supposedly free from “special interest” considerations, although an analysis of the facts indicates otherwise.

In 2007, the state of New Jersey conducted its second experiment with taxpayer-funded political campaigns, often called “clean elections” by advocates of such programs