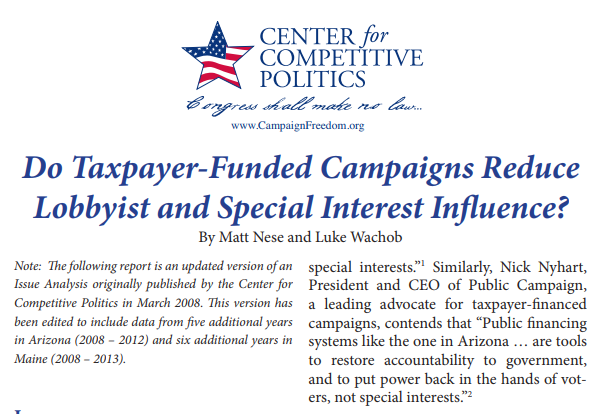 Beginning with the 2000 election cycle, Arizona and Maine instituted taxpayer-funded political campaign programs for state legislative races. Sometimes called “clean elections” by their supporters, these programs seek to replace voluntary, private contributions from citizens to the candidates of their choice with government grants to candidates who meet certain requirements.

Proponents of taxpayer-funded political campaigns systems argue that these programs reduce the influence of lobbyists and elevate the influence of average citizens. Accordingly, these advocates claim that replacing private, voluntary contributions to candidates with government grants will weaken or sever the tie between public policy and so-called “special interests.”

For example, Arizona Advocacy Network, an organization that promotes Arizona’s Citizens Clean Elections Act, argues that “elected officials using the system would be more connected to and accountable to their voters, not to lobbyists and big-money special interests.” Similarly, Nick Nyhart, President and CEO of Public Campaign, a leading advocate for taxpayer-financed campaigns, contends that “Public financing systems like the one in Arizona … are tools to restore accountability to government, and to put power back in the hands of voters, not special interests.”

This research evaluates these claims by analyzing the number of lobbyist registrations in the two states that have had taxpayer-funded political campaigns since 2000, Arizona and Maine. If replacing private contributions with tax dollars does indeed reduce lobbyist influence and effectiveness, we would expect to see a stagnation or decline in the number of lobbyist registrations in both Arizona and Maine since both states’ tax-financing programs began in 2000.

Meet the New Legislature, Same as the Old Legislature: Early findings of an examination of legislator voting patterns in the first year of the Citizens’ Election Program

The 2008 election cycle was the first in Connecticut where candidates for state legislature could choose to accept taxpayer dollars to fund their campaigns, replacing ...