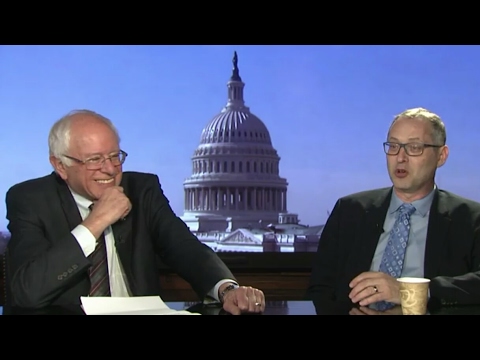 Recently, Vermont Senator Bernie Sanders sat down with professor Rick Hasen of the University of California, Irvine School of Law. In their conversation, they discussed voter ID laws, gerrymandering, and campaign finance. The result was an illuminating look at how the diverging perspectives of a populist socialist and a legal expert arrive at common policy preferences for political speech regulation.

Campaign finance did not come up until the final third of the conversation. Prior to that, Hasen made it a point to condemn President Trump for, in his view, undermining the legitimacy of democratic institutions and possibly damaging Americans’ faith in the political system.

Unfortunately, Sanders is himself guilty of those same charges, as became clear during the campaign finance portion of the discussion. He is a longtime proponent of the idea that the American political and economic systems are “rigged” in favor of the wealthy, rhetoric that is often repeated by those seeking to justify greater campaign finance regulations. Such a narrative also “undermines faith” in democracy, and Hasen seems to know this. He rightfully pushed back on Sanders’ false suggestion that the Supreme Court created a “First Amendment right to buy an election.” “I don’t like to use the term ‘buying an election,’” Hasen said, only to have Sanders shoot back “I do!” It is sad that this exchange did nothing to educate viewers as to why exactly this conspiratorial outlook is wrongheaded and harmful.

The discussion between Sanders and Hasen also showcased flawed proposals to solve the “problem” of money in politics. Both agreed that taxpayer-funded campaign programs would improve the election and governing processes. Hasen suggested “election vouchers” that voters could use to make political contributions. Even if vouchers do not get “big money” out of politics, he argued that such a system would at least make voters more engaged. In fact, there’s no evidence that taxpayer-financed campaigns lead to increased voter engagement, and, what’s more, it’s fundamentally unfair to force taxpayers to subsidize politicians.

The most concerning segment of the conversation, however, was the discussion of alternative legal theories for First Amendment jurisprudence. It began with Hasen correcting Sanders that the right of individuals to spend unlimited amounts independently supporting or opposing candidates was first recognized by the Supreme Court prior to Citizens United, in 1976’s Buckley v. Valeo decision. (Sanders, despite promoting increased campaign finance regulation as a paramount issue, found himself being corrected by Hasen on multiple occasions.) Hasen then said that the Court needs to “rethink” the Buckley decision, as it only permits the regulation of political speech in order prevent corruption, rather than to prevent “inequality.” To this point, Hasen argued that wealthy people, by having the ability to spend more money, have an increased ability to influence elections. The ability for individuals, corporations, unions, and advocacy groups to spend money on elections must therefore be restricted to “level the playing field.”

If such a rationale were upheld by the Court, government would be forced to put its fingers on the scales in every political debate. This goes against everything the Supreme Court has said about political speech for decades. The government already has a recent history of regulating what the media can say in the name of “leveling the playing field,” and introducing subsidies for certain political speech is simply another way of accomplishing the same goal.

Who would get to decide what constitutes a “fair” political outcome, anyway? In a democratic system, citizens are supposed to answer this question through voting, protesting, petitioning the government, and other means of political participation protected by the First Amendment. That Hasen and Sanders want government to play a bigger role in determining the outcome of political debates should deeply concern every American.

Near the end of the interview, Sanders hinted at why such a policy outcome would be to his benefit. “At the end of the day, we are not going to have the kind of government… that we need unless we get a handle on the political process in this country.” Believing that the system is “rigged” by the wealthy, Sanders essentially wants taxpayers and government to promote his heretofore unsuccessful policy agenda. The Senator should instead focus on doing what he’s already been doing – engaging with like-minded voters and building a movement to bring his ideas into the mainstream. That’s democracy at work.

Supporters of free speech should push back against Sanders and Hasen’s goals for campaign finance regulation. Preserving a private, voluntary campaign funding system and Supreme Court precedents like Buckley would keep politicians from writing their own rules and picking which speech they want to stifle or promote. That these First Amendment protections are being targeted so openly shows how high the stakes are.

While the debate about what Halloween costumes are appropriate rages on, what isn’t up for debate is the greatness of the growing trend of ...

The Institute for Justice joins hands with CCP and other supporters such as the Cato Institute to fight Vermont’s Act 64, which imposes expenditure limits on ...