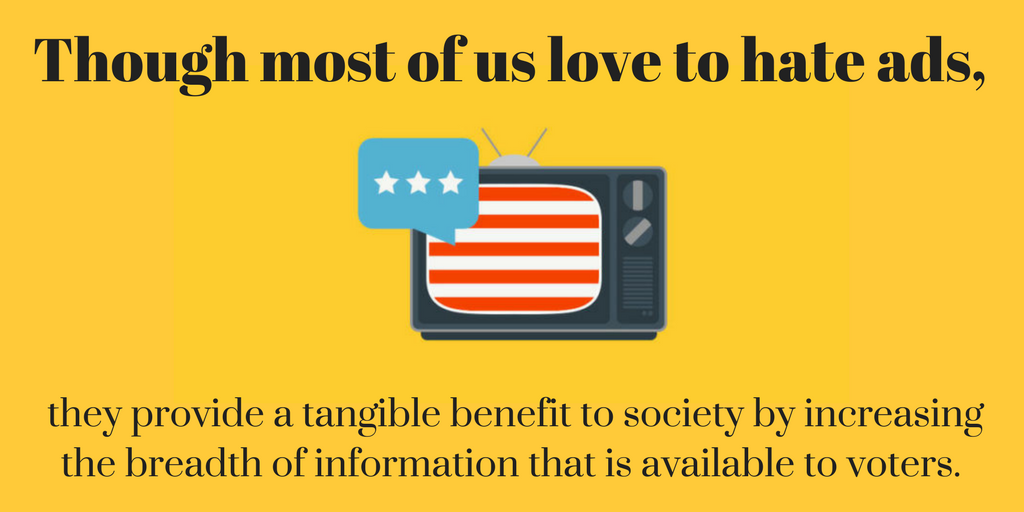 As the end of the year approaches, legislation that amends portions of the federal tax code is moving quickly through Congress. Unsurprisingly, over the past couple of weeks, this effort has dominated the news cycle. As new amendments are penciled in every day, those in favor, those opposed, and those who fall somewhere in the middle continue to debate the merits of the legislation as it changes. For those of us who aren’t experts in tax policy, the discussion helps clarify the various proposals. However, some seem to be more annoyed with the ads that offer a viewpoint on these major legislative changes, warning readers to “brace yourself for the tax debate.”

With the 2018 election less than a year away, it’s fair to say there will be a sizable number of ads regarding the tax plan coming out – but why is that necessarily a bad thing? Whether or not this bill passes, taxes will likely be a major topic of debate for candidates on both sides of the aisle leading up to next year’s midterm elections. Given the complicated nature of our tax code, it would stand to reason that the ads would be welcome since they provide more information to constituents whose livelihoods will be affected in some way by the legislation.

It has been 31 years since the federal tax code was significantly changed – and not for lack of trying. Even within the two major parties, there is no real consensus on what the ideal framework would be, largely because there is no real consensus on the economic implications of different changes to the tax code. Highly-qualified authorities on both sides of the issue could debate the subject for days, each raising compelling arguments both for and against the merits of tax reform. If the existing tax code and potential reforms to it are so perplexing and divisive among experts, how can your average voter possibly hope to form a reasonable opinion?

Nonprofit advocacy groups on both sides of the debate that put out ads are part of the answer.

Organizations that work primarily on tax policy, such as Americans for Tax Reform or the Tax Policy Center, have the knowledge to understand the economic implications of the legislation (as they see it), and the ability to package that information in such a way that average voters can understand how the bill will affect their day-to-day lives. Ads, whether placed online, on TV, or on the radio allow organizations to reach more Americans with their message.

Groups that aren’t typically involved in the tax debate also insert useful perspectives into the conversation. Given the far-reaching nature of tax reform, it is unsurprising that groups with a different primary interest would get involved. Consider voters who are passionate about health care or the environment. They likely want to know how tax reform would affect those policies. It makes perfect sense for groups with expertise in these areas to speak about the implications of the tax bill on their policy spheres. An ad from one of those organizations just might sway someone who was previously uninterested in taxes to do more research on the subject themselves.

Right now, you’re probably thinking that only in an ideal world where all ads are fair, informative, and accurate, could this be true. In reality, some political ads do take a sliver of truth and bury it under a few feet of dubious and misleading claims.

However, strange as it may sound, even these ads are valuable.

Unfortunately, we’ve all seen our fair share of vitriolic ads, which can be incredibly frustrating. But, say that a voter sees two back-to-back ads on the same subject, each with claims that contradict the other. The conflicting information could spur that individual to do their own research and seek out the facts behind the flashy claims in the ads. There is real value in something that encourages someone who was previously agnostic towards a policy or candidate to do more research and make an informed decision on their own.

Ads can also serve as an important check on legislators when re-election time comes around. They provide concrete evidence for voters to hold their representatives accountable for the claims they, or their party, made while trying to rally supporters behind a new piece of legislation, such as the current tax plan. If ads expose promises that prove to be exaggerated or false, voters can voice their disapproval come Election Day.

At the end of the day, tax reform will affect individuals differently. Whether this specific legislation passes, it will be up to the individual voter to decide at the ballot box if the vote cast by their legislators improved their livelihoods, or if their representatives failed and they should try someone new. Though most of us love to hate ads, they provide a tangible benefit to society by increasing the breadth of information that is available to voters.

Did Lessig Fudge the Numbers?

“Veritas” was the Roman goddess of truth and the mother of Virtue. The Harvard University motto today is “Veritas,” – truth – but as in many ...

During the time-honored tradition of contentious political discussions at the Thanksgiving dinner table, one of your relatives may have mentioned the amount of money ...