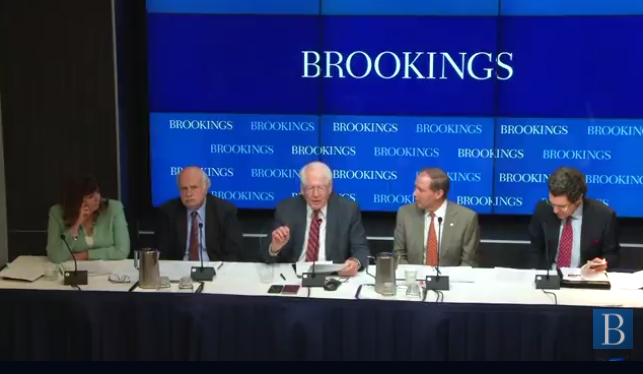 On Wednesday, the Brookings Institution hosted an event entitled “Democracy at risk: Solving critical problems threatening U.S. elections.” It was billed as a discussion about the “challenges” of the opened “floodgates to Super PAC and secret money in U.S. elections.” Besides the panel, Brookings also distributed a list of specific policy objectives from Democracy 21, an organization that advocates for greater restrictions on political speech. The proposals included taxpayer-funding of political campaigns, “shut[ting] down” super PACs that support individual candidates, and creating a new campaign finance enforcement agency to replace the Federal Election Commission.

The panel was moderated by Norm Eisen, a Senior Fellow of Governance Studies at Brookings, chief Obama White House ethics lawyer, and Chairman of the Board of the pro-regulation Citizens for Responsibility and Ethics in Washington (CREW). Featured on the panel were Richard Painter, a Professor at University of Minnesota Law School, chief ethics lawyer for the George W. Bush White House, and Vice-Chair of CREW’s Board; Senator Tom Udall (D-NM); Congressman David Price (D-NC); Fred Wertheimer, President of Democracy 21; and Karen Hobert Flynn, President of Common Cause, yet another pro-regulation group.

Each panelist spoke about their individual or organizational priorities in introducing more government restrictions on political speech and association. First, Painter (via video chat in Minnesota) began with the topic of foreign influence in elections. He joked – without offering any proof – that it was easier for foreign money to get into elections illegally than for underage drinkers on college campuses to access alcohol. CCP has noted the stringent regulations on the books that criminalize foreign election spending. He recommended more disclosure of the identities of those who fund online political ads and 501(c)(4) advocacy nonprofits (like the ACLU or Planned Parenthood), and endorsed a $200 tax credit for Americans to fork over to politicians running for office. Painter argued that such taxpayer-financing of campaigns would actually reduce government spending (a claim that CCP research contradicts), and claimed, puzzlingly, that if the government hasn’t given somebody their $200 credit, they shouldn’t be allowed to tax them. Painter supported such a law or constitutional amendment in the name of “no taxation without representation.”

Next, Senator Udall spoke about his misguided crusade, since being elected New Mexico attorney general in 1990, against the landmark 1976 Supreme Court decision Buckley v. Valeo. This crusade manifested itself in Udall’s failed late 2014 gambit to pass a constitutional amendment that would have essentially amended the First Amendment to give lawmakers virtually unlimited control to regulate and censor political speech at their whim. He argued that the Buckley decision wrongfully labeled money as speech, and took the country in the direction of eliminating campaign finance limits. In response, Udall advocated for “retool[ing] our institutions” through taxpayer-financing of campaigns and increased disclosure (especially with the help of Internet tracking). The Senator also decried the amount of time legislators spend fundraising (a persistent complaint among pro-regulation lawmakers), but reassured the audience that it was only a matter of time before the litany of new political speech and association restrictions being proposed (and sometimes passed) in the states make their way to the federal level. As we’ve noted before, if lawmakers like Udall are concerned about time spent fundraising, they could raise existing contribution limits, as over 15 states have done since 2010 alone.

Congressman Price highlighted his role in adding onerous “Stand By Your Ad” provisions to the expansive McCain-Feingold Act, which imposed an overwhelming host of restrictions on campaigns and candidate-related speech. He advocated for expanding disclaimer requirements to robocalls, all Internet ads, and other political ads from “outside” organizations. Price attacked the notion that the Citizens United decision expanded free speech rights, arguing that the right to not have one’s speech “drowned out” by the speech of others is also a component of free speech. Like the previous panelists, he too called for taxpayer-financing of campaigns and more disclosure of the private information of Americans who support nonprofits as part of a “long list” of needed “reforms.”

Wertheimer, who began with a quote from Plutarch about bribery in the Roman Republic, drew comparisons with the current era. He accused the Supreme Court of throwing out bribery laws (presumably referencing the unanimous 2016 decision in McDonnell v. U.S.). Despite sustained failure, Wertheimer insisted that the solutions to fix the campaign finance system already exist and have support with the general public, especially at the state level. In Wertheimer’s eyes, what is needed is only the “political will” to implement greater speech restrictions. Drawing a contrast to the failed efforts of Republicans to develop a replacement plan for the Affordable Care Act, Wertheimer proclaimed “we will be ready” when the opportunity comes to implement a speech regulatory agenda nationwide.

Finally, Flynn highlighted the various efforts in the states to implement campaign contribution limits, taxpayer–financing, mandatory nonprofit disclosure, and other speech-restricting policies in recent years. Despite their best efforts, the anti-speech lobby has been mostly unsuccessful in each of these endeavors. She called for a replacement to the “flawed FEC” (a recurring demand from those frustrated at the FEC’s bipartisan structure) and for taxpayer-financing of campaigns to “fundamentally shift power” from incumbents to electoral challengers. (On this score, CCP research again suggests this does not happen in reality.) Flynn pointed to Seattle as a case study to watch how tax vouchers for political contributions perform in practice. Of course, early results paint Seattle’s experiment as a failure that advantages incumbents and is susceptible to fraud.

A particularly interesting moment during the event occurred during the Q&A. One audience member asked how government could regulate the flow of money in politics when money is so necessary for campaigns to function. The two sitting lawmakers on the panel, Udall and Price, agreed with the premise that money is “obviously” important for congressional candidates and that politics “requires” money to engage with an ever-increasing population of voters. Price noted how one campaign ad increased his name recognition as a candidate three times more than a year of regularly attending church dinners had done. The lawmakers added that their concern with “money in politics” lies with its sources and degree of influence on the system.

This was a fitting end to the event because it brought to light what is often ignored during these discussions. Despite decrying Supreme Court precedent that spells out the inseparability of money and speech, those most involved in day-to-day politicking acknowledge the practical necessity of spending money to meaningfully participate in politics and spread a message. Once one reaches that realization, the question of regulating other peoples’ political giving and spending becomes a question of First Amendment rights. Asking the government to regulate in that area is tantamount to asking “who should government allow to speak, and how much speech should be allowed?” That question should elicit strong skepticism from those who cherish the First Amendment.

How Campaign Finance “Reform” Is Abused

Yesterday the Milwaukee Journal Sentinel reported on doings at the Wisconsin State Elections Board: