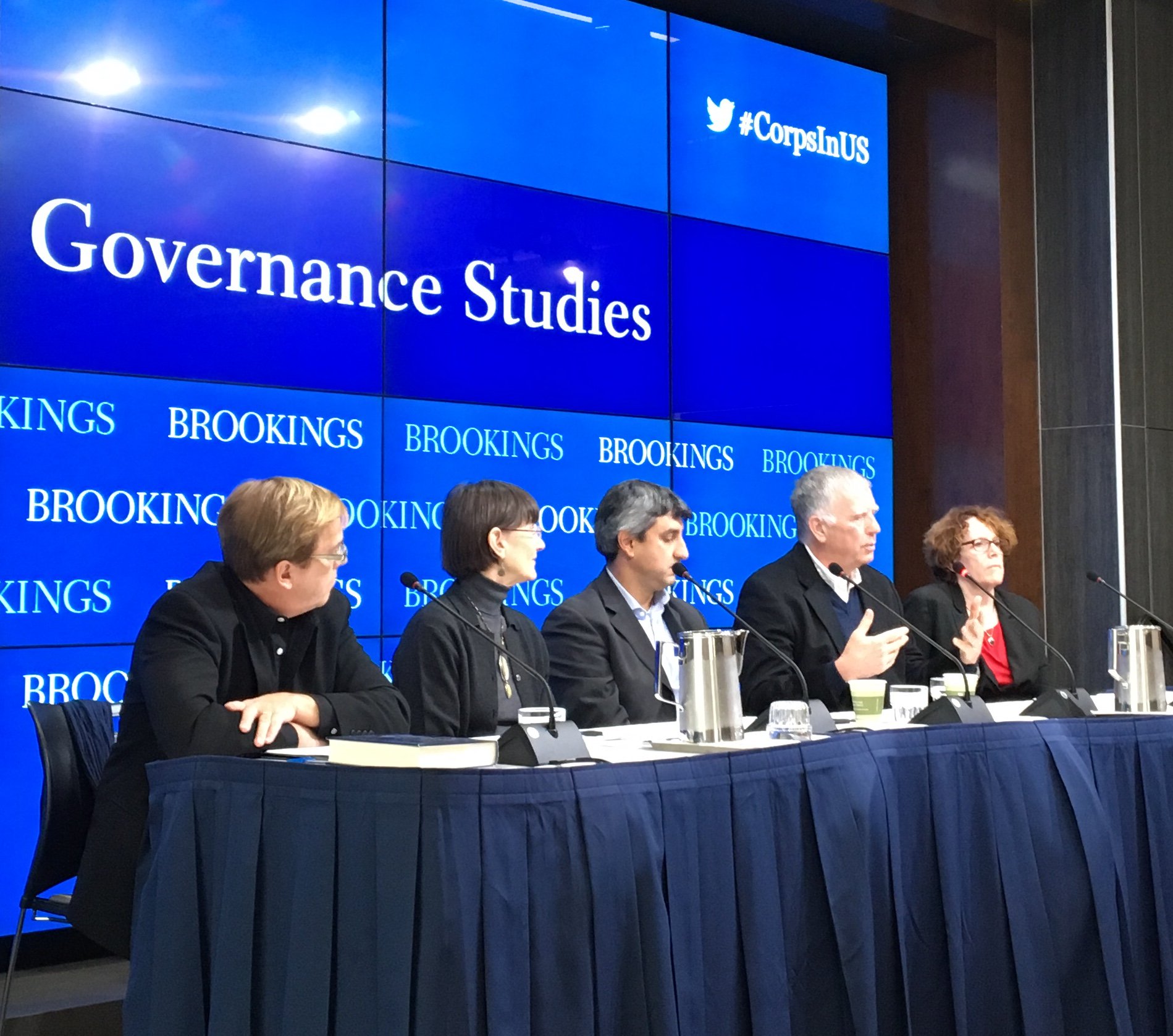 On Wednesday morning, the Brookings Institution hosted an event to examine the relationship between corporations and democracy throughout American history. However, the role of nonprofit groups in allowing citizens to speak freely about politics was noticeably absent from the conversation.

The discussion drew largely on the various arguments presented in the aptly titled book, Corporations and American Democracy. Funded by the Tobin Project, the book provides an historical analysis of how the relationship between the two has changed over the years. The panel comprised several of the book’s authors and editors and was moderated by Dr. Naomi Lamoreaux, a Professor of Economics and History at Yale University.

Lamoreaux began the discussion by presenting the core underlying themes of the book, starting with the notion that, throughout history, Americans have had a longstanding “love/hate relationship” with corporations. This relationship, Lamoreaux suggested, is characterized by the “enthusiastic embrace of corporations as engines of opportunity” and the simultaneous distrust of these entities as “corrupt drivers of inequality.” In her opinion, these organizations play a unique role in society, allowing humans to accomplish things they would otherwise be unable to do on their own. However, as a result, she believes there are extra responsibilities that should be imposed upon corporations.

Following Lamoreaux’s introduction, each panelist spoke briefly about the main arguments of their respective chapters. The panelists diverged on their prescription for what the role of corporations should be in American democracy. However, one point was repeated several times – by multiple panelists – throughout the discussion. Essentially, they agreed that while corporations are ubiquitous components of today’s society, they are not homogenous, and shouldn’t be treated as such. One of the panelists, Dr. Margaret Blair, emphasized this point several times, arguing that “lines of distinction must be drawn” between distinct types of corporations, and that “it doesn’t make sense to broadly apply” uniform regulations to all incorporated entities. The panelists’ argued that any effort to change the role of corporations in society, regulatory or otherwise, must take this reality into consideration.

While the panelists’ fear was largely that regulations would be ineffective if they weren’t narrowly tailored to specific types of entities, another concern the panelists neglected to mention should be that casting an overly-broad net could impose unintended, but significant, costs on groups exercising their First Amendment rights to speak about political issues.

This is especially dangerous for nonprofit advocacy groups, especially smaller organizations that do not have the financial capability to hire lawyers to ensure they do not stray outside the bounds of the law. Nonprofits rely on voluntary donations to keep their doors open. But broad regulations, often intended to curb the behavior of large, for-profit organizations, impose a litany of unintended costs upon these groups, inhibiting their ability to fulfill their missions and express their views.

The primary theme of this event was the importance of having a thorough, historical background on the relationship between corporations and democracy. As such, the role of nonprofits throughout American history in enabling groups of like-minded individuals to speak freely must be part of that conversation. That history suggests that efforts to regulate corporate involvement in American democracy are usually driven by short-sighted and self-serving motives.

During the question and answer session, several audience members asked the panelists what they believed the correct government response should be to the precedent set by Citizens United v. FEC and other recent Supreme Court cases. Unfortunately, several of the panelists opined that regulation of speech by nonprofits, businesses, and trade unions through disclosure requirements, such as the so-called “DISCLOSE Act” and the misleadingly-named “Honest Ads Act,” was the best path forward. Both of these bills would effectively halt the progress that has been made by the Court’s recent pro-speech rulings, but they wouldn’t make politics fairer or more equal, as their supporters contend.

The most interesting point of the entire panel may have been raised by John Wallis, a Professor of Economics at the University of Maryland. Wallis stated that “there is a strong tendency in human nature to immediately fix problems as they arise, but the problems we have now won’t always be there.” His point is a strong one. Overly broad government mandates often create new issues, restarting the regulatory cycle and chipping away at the liberties which have historically set the United States apart. When it comes to our First Amendment freedoms, policymakers and regulators would be wise to heed this warning.