Calling All Joke Police: Satire Is Not Disinformation 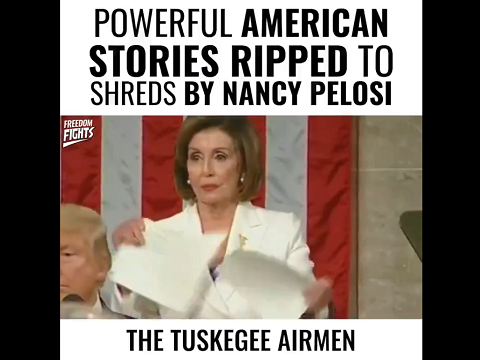 Since the days of ancient Greece, people have used satire to criticize political leadership and make biting social commentary. In the United States, parody, juxtaposition, exaggeration, and comparison have always been considered fair game in politics. But now, under the guise of deterring disinformation, some public officials want to change that tradition.

Two recent controversies illustrate how once-celebrated forms of political expression are being targeted by people in power. The first example involves the now-viral moment when Speaker Nancy Pelosi shredded her copy of the President’s State of the Union address.

Conservative nonprofit organization Turning Point USA, seeking to demonstrate that the Speaker’s actions were disrespectful to the citizens honored in the speech, created a video juxtaposing that footage with clips from the address praising a Tuskegee Airman, reuniting a military family, and surprising a young child with a school choice voucher. The text above the video reads “Powerful American Stories Ripped to Shreds by Nancy Pelosi,” for those missing the point.

That didn’t stop Speaker Pelosi’s Deputy Chief of Staff from calling the clear political parody a “fake video… deliberately designed to mislead and lie to the American people” and demanding that social media platforms take it down. This claim was parroted by Rep. Veronica Escobar and Rep. David Cicilline. The “deception” in this case is apparently that, while Pelosi did in fact rip the speech, she did so only once – after the President’s address, not repeatedly as the Turning Point video shows – and not in direct response to the heartwarming stories of distinguished Americans.

Well… yes, the video’s editing was deliberate. That’s the entire point it sought to make – Pelosi’s ripping of the speech was so offensive to the citizens who were honored that she might as well have torn it in the face of each. You might not agree with this view, but it’s the perspective that Turning Point chose to express.

Perhaps this criticism was hurtful to Speaker Pelosi, and she believed the video misrepresented her intentions. Rather than calling on platforms to suppress this speech, she should have responded by explaining her choices or even simply condemned the video. Fortunately, because Facebook and Twitter refused to remove the content, that’s what she eventually did.

Following the Pelosi video debacle was a similar controversy involving now-former presidential candidate Michael Bloomberg. While still competing for the Democratic nomination, Bloomberg tweeted a video criticizing the experience of his fellow candidates and showcasing that he was the most qualified to create jobs. To make the point, the campaign’s video showed a clip from a Democratic debate where Bloomberg asked the other contenders, “I’m the only one here I think that’s ever started a business. Is that fair?” In real life, the other candidates were silent for a beat in response to Bloomberg’s question. The video stretches this moment for maximum effect, exaggerating the silence and adding the sound of crickets chirping – what could be more obvious satire? Sadly, Bloomberg campaign spokesperson Galia Slayen had to spell out that no, there were not actually crickets in the auditorium.

Despite this clear parody, a Twitter official speaking on background to The Washington Post claimed “the video would likely be labeled as manipulated under a new anti-disinformation policy that will go into effect in March, but for now it remains online with no disclaimer.”

Calling all Joke Police: neither of these examples contain disinformation. It’s outrageous that politicians and social media platforms would consider this kind of content to be deceptive in any way.

Will Twitter’s new policy censor President Trump’s references to “Crazy Bernie” without first sending fact-checkers to evaluate Sen. Sanders’ mental health records? Will it remove Trump’s tweets calling Vice President Biden “Sleepy Joe” when, in fact, the Democratic candidate for President had a full night’s rest? These examples might sound too extreme to incur the wrath of content moderators at Facebook or Twitter, but if the politicians calling for the takedown of the Pelosi and Bloomberg videos have their way, where exactly is the line going to be drawn?

Admittedly, I’ve been stung by disinformation before. In 2008, I often confused Tina Fey’s spot-on Sarah Palin impression for the real deal. Thankfully, I now know that I was merely a victim of Saturday Night Live’s dastardly and sophisticated election interference.

That was a joke. But you already knew that, because it’s obvious. You considered the context and the source and understood me to be mocking the adversarial position. That’s why Americans don’t need paternalistic forces coaching us through standard political commentary by controlling what we see and hear.

As FCC Commissioner Brendan Carr recently said in response to the Bloomberg video, “Political satire is one of the oldest and most important forms of free speech. It challenges those in power while using humor to draw more people in to the discussion. Equating this type of political speech with doctored deepfakes or illegal content is a serious mistake.”

The panic over online disinformation is being used as a cudgel by the powerful to control Americans’ speech. If these recent controversies are any indication, attempts to silence political expression will get worse as the 2020 election approaches. We must remain committed to protecting free expression in all its forms, because someone is always waiting in the wings with the newest excuse to silence it.

If an elected official views a political advertisement as misleading, or even false, should that politician have the power to prevent citizens from viewing ...