“Revoke 230”: The Two Words That Could Destroy the Internet 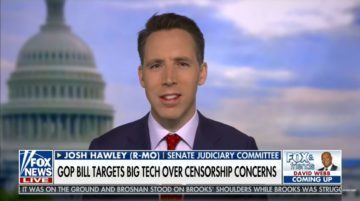 Section 230 of the Communications Decency Act of 1996 shields internet platforms like Twitter, Facebook, and your local newspaper from liability for the content created by their users. Cybersecurity law professor Jeff Kosseff authored a book about Section 230, calling it “The Twenty-Six Words That Created the Internet.” As Kosseff explains, these protections have allowed the internet to become the flourishing hub of political discussion and interaction it is today.

Thanks to Section 230, internet companies can safely allow the virtually unlimited generation of content by their users without fear of being sued over the posts of a few bad actors. This was not the case before Section 230’s existence. Take, for example, Stratton Oakmont v. Prodigy (1995), in which a New York court decided that, since the online service provider Prodigy had engaged in some content moderation, it was subject to defamation suits for user-generated content.

Then-Representatives Chris Cox and Ron Wyden recognized the potential for defamation suits to compel online service providers to adopt protective measures and intensify their content moderation. In response, they proposed the protections now enshrined in Section 230. As a result, online companies today do not face this issue and have been able to maintain a relatively consistent environment where user-generated content can be developed and deployed at a moment’s notice. On balance, this is a positive outcome for civil discourse and freedom of expression. Like countless others, I can use my phone at any time to connect with others around the world to discuss our political concerns.

Perhaps because of this freedom, Section 230’s protections for internet companies are currently under heavy scrutiny by President Trump and some of his allies in Congress. Trump has signed an Executive Order to “clarify” the scope of the immunity provided by Section 230, and the Department of Justice has issued recommendations for reform. On May 29, Trump tweeted more simply: “REVOKE 230!”

A cadre of Republican senators, in particular, have led the charge against the law. Missouri Senator Josh Hawley has introduced legislation to limit Section 230’s reach, and so has Senator Kelly Loeffler of Georgia. Senators Hawley, Loeffler, and two of their Republican colleagues sent a letter to the Federal Communications Commission, requesting that the language in Section 230 be clarified in more specific terms in concert with the President’s Executive Order. Although the perceptions of anti-conservative bias on Twitter may be driving the actions of the Republican lawmakers, leading Democrats like Joe Biden and House Speaker Nancy Pelosi have also voiced support for repealing or reconsidering Section 230.

Fortunately for Twitter and its internet brethren, their First Amendment rights extend beyond the language of Section 230, and government cannot penalize companies for not being politically “neutral,” however that term is defined.

To some, it seems that Section 230 allows the politically motivated censoring of Twitter users. In reality, Twitter retains the First Amendment right to control what kinds of political messages it wishes to be associated with, with or without Section 230. The question is not, “Does Twitter have the right to get rid of political content with which it disagrees?” The answer is certainly yes, even if we might call such a move unwise or unconducive to the fostering of open debate.

Rather, the question is, “Would we prefer an internet with no user content at all?”

“Revoking” Section 230 would not result in a more open internet. Instead, the opposite outcome would result. Likewise, it would not be a step toward greater First Amendment protection but rather greater censorship of speech.

Regardless of your political beliefs, it should be concerning to every American that lawmakers are acting like the First Amendment’s guarantee of free association is a reward for political impartiality.

Removing liability protections for internet platforms is a dangerous move in itself, but conditioning them upon a provider’s treatment of political speech is constitutionally (and practically) unenforceable. Twitter has the right to freely associate, and that is a right independent of Section 230. No one, especially the government, has a First Amendment right to the unconstrained use of a private company’s service.

Stripping Section 230’s protections from internet companies may drive them to stop fact-checking President Trump’s tweets and cease favoring some political messages over others, but if doing so trades companies’ actual First Amendment interests for our fictional ones, can we really call it a win for liberty and freedom of speech and association? If no liability protections mean more moderation and less user speech, political or otherwise, are we really championing open discourse?

Scrapping Section 230 would not solve a First Amendment violation, but if its replacement is not carefully drafted, it could surely produce one. And it would likely be disastrous for the future of political speech on the internet.

When the Government Tries to Silence Its Own Employees

The First Amendment protects the right of Americans to speak freely on social media without fear of government retaliation or punishment. But employees of ...