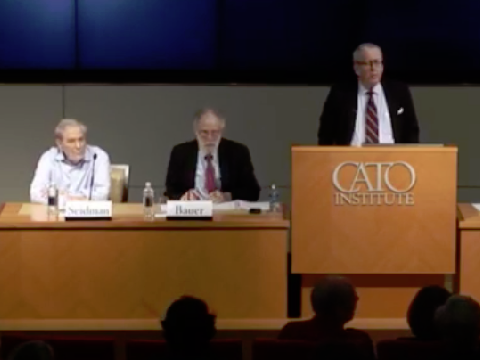 A recent event at the Cato Institute examined the controversial question, “Can Free Speech be Progressive?” The query was posed by professor Louis Michael Seidman of Georgetown University Law Center in his recent article for the Columbia Law Review. This paper is another in a series of articles and op-eds questioning the value of free speech and the First Amendment for the progressive cause. Also speaking on the panel, which was moderated by the Cato Institute’s John Samples, were Robert Bauer from NYU Law School and Ronald K. L. Collins from the University of Washington School of Law.

While these issues merit discussion, it’s worth focusing on Seidman’s primary claim that unequal distribution of wealth is the problem that should erode progressive support for free speech and the First Amendment. Because of this unequal distribution, Seidman contends the conversation is dominated by the few speakers who have the resources to make themselves heard. Furthermore, he believes these speakers are least likely to be progressive.

As an example, Seidman alluded to Roger Ailes and Rupert Murdoch using their resources to start Fox News in support of a conservative agenda.

Unfortunately for Seidman, this proposition fails to hold up in our modern society.

It’s true that the ability to speak is not equally distributed. Those with the resources to start a cable news channel or buy a newspaper can certainly spread their views more widely than others.

But the domination of speech by a few large players has been declining for some time, and that decline is accelerating. Americans once had to choose between three major broadcasting networks. Even the traditional television options now seem nearly infinite by comparison. But television is only one medium. Online-only platforms, which host written, audio and video content, have grown even faster.

Alternative news sources like podcasts bring in millions of downloads a day. Online publications can be started on a shoestring budget. If starting a website seems too daunting, platforms like Twitter or Reddit allow individuals to reach thousands of potential listeners with the press of a button. When Professor Eugene Volokh predicted “cheap speech” would emerge during the dawn of the Internet, he didn’t know how correct he would be.

Of course, this doesn’t mean every speaker is heard equally. But upfront resources, what Seidman refers to as the allocation of property, do not dictate whether a message resonates. Previously little-known speakers can reach a huge audience. Just as the pamphlet “Common Sense” was widely read in the founding era, podcasts like Pod Save America and The Ben Shapiro Show demonstrate that any speaker can find an audience if enough people like what they have to say.

As speech continues to become cheaper, the likelihood of the people with the most talent – not the most upfront resources – gaining the largest audience continues to increase. Does an adherence to Progressivism require these people’s speech to also be redistributed?

Indeed, in a contest of talent versus resources, talent seems to regularly outshine money. Examples like the failure of the well-funded Air America or lack of a conservative “Daily Show” serve as a reminder of this fact.

The truth is, in any free society, a basic inequality of outcomes is necessarily a result. While those with abundant resources have more opportunities to convince others that their message is worth hearing, no amount of speech can convince someone to listen. This is especially true in an era where one can easily change the channel or watch a different video on YouTube.

Professor Seidman errs when he suggests than speech isn’t available to those with limited resources. Instead, we live in a golden age where regular Americans have a greater ability to make themselves heard more loudly than ever before. Blogging, YouTube, Instagram, and Twitter have made celebrities of previously unknown individuals and amplified their voice until it’s heard by millions. And successes and failures can be counted among those of all political stripes. Meanwhile, traditional newspaper circulation continues to dwindle.

If the inherent cost of First Amendment activity truly prevented progressives from achieving their goals, then the modern era of cheap speech should be a boon to the movement. That it has not, at least in Seidman’s view (and arguments abound to the contrary), likely says more about issues within the progressive movement than the limits of the First Amendment.

On Monday, the Cato Institute hosted a forum to discuss Floyd Abrams’s new book, The Soul of the First Amendment. Abrams is well known ...

Let Us Protect You From Speech

You know that feeling when you read an op-ed on a pertinent issue and all of a sudden you realize there is no author ...