The Washington Post Holds Series of Panels on the First Amendment 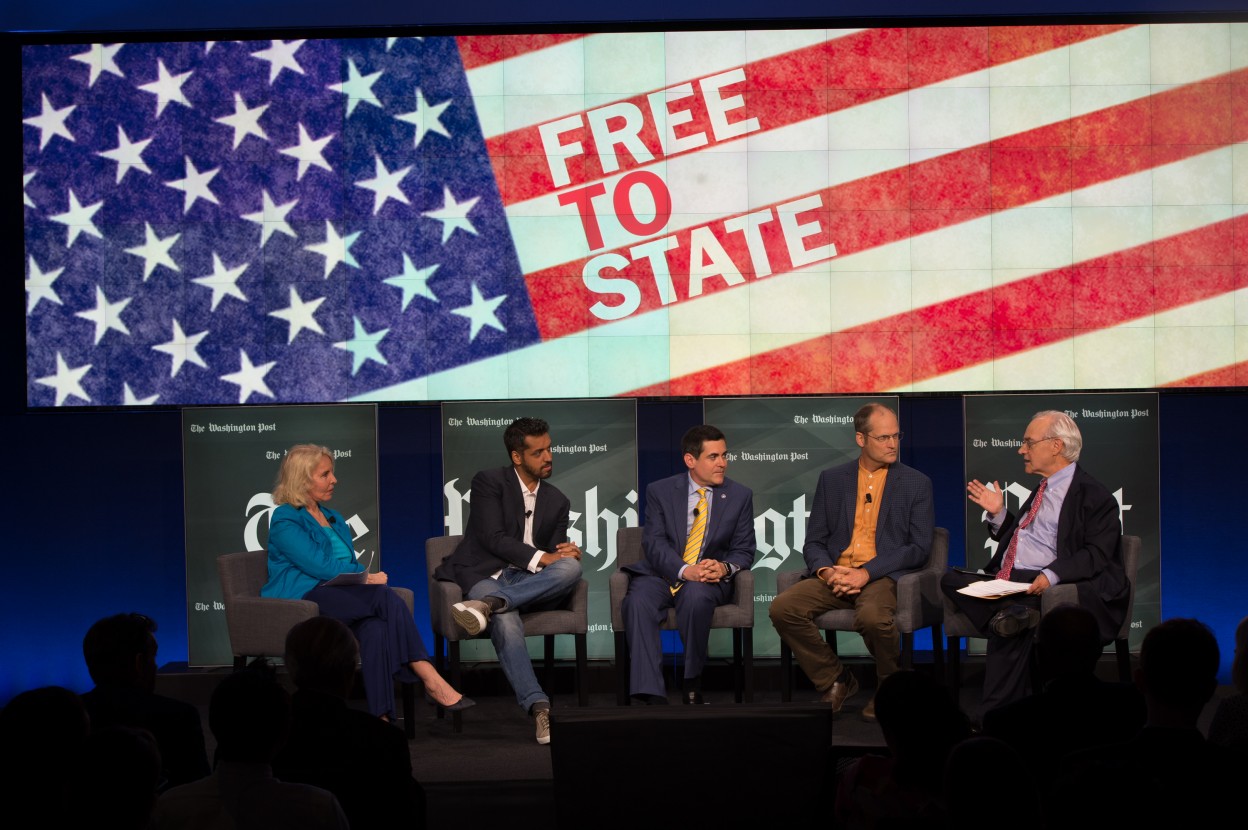 On Tuesday, The Washington Post hosted a series of First Amendment panels at its offices in an event called “Free to State: A New Era for the First Amendment.” The panels touched on several different topics related to free speech and freedom of religion and were moderated by Post writers.

The Post’s Publisher and Chief Executive, Frederick J. Ryan, and Executive Editor Martin Baron opened the forum by explicitly tying First Amendment issues to President Trump as a figure who has both benefited politically from free expression, and possibly threatened those rights for others. Baron pointed to Trump’s threats of violence against protesters, ruminations about “opening up” libel laws, and reported considerations about arresting journalists who publish leaks. But the panels themselves rarely touched upon these topics.

Abrams expressed pessimism about the state of free speech today, specifically regarding the aggressive crackdown on digital leaks (Abrams had worked on the famous Pentagon Papers case on this same topic.) At the same time, he suggested that the Founders of this country would be “stunned” at the expanded legal protections for free speech that have evolved over the past century based on the broad framework they left in the Bill of Rights. The protections for offensive speech in the U.S. are unique in the developed world, for example, as Abrams covers extensively in his new book.

Jaffer was somewhat more equivocal in his defense of free speech. As a native Canadian, he believes that a strong democracy can still exist while restricting “hate speech” and that Americans do not sufficiently recognize the real-world impact of hateful words. Still, he suspected that restricting opinions by stifling speech might be an even more unpalatable option. Jaffer also discussed how the Knight Foundation was seeking to legally prevent President Trump from blocking users on Twitter, under the theory that Trump’s tweeting in an official capacity means that Americans have a right to access his tweets as government statements.

LaJeunesse began by defending against charges that Google’s access to user data breaches privacy. He said the company did its best, given complex regulatory burdens, to simplify user control over their own data. LaJeunesse noted that individuals should be free to “walk away” and use Google services anonymously, but cautioned that the services were simply less helpful without such data. He also waded into the discussion about hate speech, drawing from his perspective as a gay man. LaJeunesse cautioned that outlawing hate speech doesn’t address underlying animosities. As he explained, he would rather know if somebody hates him – particularly if it’s someone else in a position of power – so that he can react accordingly. The danger, to LaJeunesse, is when people act on hateful speech.

Abrams jumped in at this time to point out that even Weimar Germany had hate speech laws that they actually used to try prominent Nazis like Hermann Goering prior to their ascension to power. But those prosecutions only gave the Nazis more publicity, and galvanized their resistance to the political system that they would eventually overturn. To Abrams, the key is what LaJeunesse called “counter speech” – the answer to speech that one dislikes is more speech, not less.

The acceptance of free speech on campus is a particularly charged topic today. As Anderson pointed out, the U.S. Senate Judiciary Committee held a hearing that very same day entitled “Free Speech 101: The Assault on the First Amendment on College Campuses.” Both Paxson and Zimmer agreed that, while strong, the use of the term “assault” was no hyperbole. The presidents were nearly united in condemnation of students who (along with outside agitators) seek to shut down speakers they disagree with. But beneath that broad agreement, there was more nuance.

Zimmer spoke on a well-known and controversial letter by his Dean of Students saying that the University of Chicago did not support “trigger warnings” or “safe spaces,” but clarified the letter’s meaning. He outlined how the concept of “trigger warnings” was originally intended to help people who suffered from PTSD, but became more broad and associated with unrelated topics. Paxson reported that most Brown professors don’t use such warnings, but may voluntarily choose to inform their students if they will be studying upsetting subject matter, such as the Holocaust. Zimmer agreed that academic freedom permits professors to include such warnings, but clarified that the University of Chicago simply does not force faculty to use them.

The presidents split on whether students actively seek protection from uncomfortable ideas. Paxson saw Brown students not as fragile, but as deeply engaged with difficult issues – albeit she acknowledged that some may use disagreeable tactics, such as shutting out opposing viewpoints, as a way to promote their own. Zimmer was “less sanguine” on that matter. He recalled receiving letters from many students who felt stifled from criticizing the state of free speech at colleges. However, he insisted that this issue was not necessarily a political, left/right issue, but that it was dependent on the unique features of each college – although both presidents conceded that most students are certainly left-leaning.

As for solutions, Zimmer emphasized stronger university support for speaker security in the face of rowdy protesters. Paxson suggested better enforcement of university policies, such as restrictions on non-university attendance to controversial speaking events, to keep out those who flout their policies and stir up trouble.

The next panel on “Freedom of – and from – Religion” was not as focused on free speech, but was thought-provoking nonetheless.

Russell Moore, President of the Ethics and Religious Liberty Commission of the Southern Baptist Convention, frequently sparred with Post columnist E.J. Dionne (who moderated along with Sally Quinn) about whether “religious freedom” simply means protecting discrimination against LGBT Americans, or whether the left was the “aggressor” in the “culture wars.” Stephen Prothero, the Chair of the Department of Religion at Boston University, suggested that his fellow liberals tend to be less supportive of religious freedom, saying that they should accept that protecting the First Amendment means they will sometimes lose political battles. For his part, New York Times op-ed contributor Wajahat Ali spoke about the experience of being a Muslim in America – a situation of “other-ness” similar to what Catholics used to face in the U.S., suggested Dionne – and how both the right and left distrust the Muslim faith in their own ways.

The final panel, “Free Speech: On Offense,” featured conservative commentator and provocateur Ann Coulter alongside former President of the ACLU, Nadine Strossen, and was moderated by Post columnist Charles Lane. Despite coming nominally from the right and left, the two guests largely agreed on the issue of civility.

Lane often framed his questions to the respondents in terms of whether Coulter’s colorful rhetoric went too far, and whether it was fair to compare her free speech to that of civil rights leaders. (Strossen had pointed to civil rights leaders as examples of individuals who were often legally persecuted for their speech.) Strossen doubled down on the notion that defending free speech does not mean defending the content of the speech itself. Reviving the example of hate speech laws in Weimar Germany, Strossen emphasized her desire for the law to aggressively prosecute hateful actions rather than words, saying that if the ACLU thought that speech laws would defeat Nazis, they’d be in favor of them. But they don’t.

Coulter, clearly taking offense at the framing of Lane’s questions, insisted that many of the accusations of incivility leveled against her either come from fabricated quotes or jokes taken out of context. She pointed to her series of Tweets about crimes committed by illegal immigrants, which are often presented in a shocking way, but which she claimed were mostly facetious attempts to highlight stories that are overlooked by the mainstream media, like The Post. Accusations of double standards were a major theme of Coulter’s arguments. She said her supposed incivility paled in comparison to those who “dehumanize” conservatives by calling them Nazis and racists. She said similarly of Western countries with their own hate crime laws that their governments punish citizens for offensive jokes while simultaneously tolerating online speech by radical Islamic terrorists.

The latter point inspired disagreement between Strossen and Coulter. Coulter eventually conceded that she probably was not as big a free speech “purist” as Strossen and the ACLU – drawing a contrast between “core” political speech and “expressive acts,” such as American Nazis marching in Jewish neighborhoods, and suggesting that the latter warrants fewer protections. But Strossen insisted that such protections for abhorrent speech are necessary to protect speech by righteous, but still unpopular causes, like the civil rights movement.

Overall, the four panels varied between contemplative analysis and heated debate. One thing that stood out (obviously due to my own organizational affiliation) was the First Amendment rights not featured in any of the four panels. To be sure, there was no panel focused exclusively on freedom of the press either – despite the introductory comments about President Trump’s relations with the media and the fact that this event was held by a major newspaper. But neither was there any mention of threats to political speech with regard to various campaign finance regulations.

It may be that there are so many facets to the First Amendment and so many salient issues to cover that it simply was not possible to devote a panel – or even a moderator question – to this topic. But perhaps this is emblematic of a wider, more negative trend: political speech, associational, and contribution rights are still not considered core First Amendment rights by many in the media.

Despite decades of Supreme Court jurisprudence and the logical link between spending money and practicing free speech, the issue is still viewed by most members of the media as one of preventing corruption in the electoral system rather than the right of citizens to participate in their democracy. This may be due in no small part to the fact that speech by the media is protected by a separate class of First Amendment rights. As such, many in the media do not see any constitutional equivalence with the speech of ordinary Americans, who are subject to a panoply of local, state, and federal regulations when speaking.

Nonetheless, let’s hope that future panels by The Post and others will extend to political speech rights the same reverence and urgency that were clearly present for the issues featured in these four panels surrounding other types of speech.

The internet is an empowering and diversifying medium capable of uplifting marginalized voices. It has allowed more Americans to meaningfully participate in political dialogue ...

A new study is being hyped as evidence that the government needs to police the First Amendment on social media. This month, the Campaign ...