“Dark Money” Documentary Warns Viewers of the Dangers of Postcards 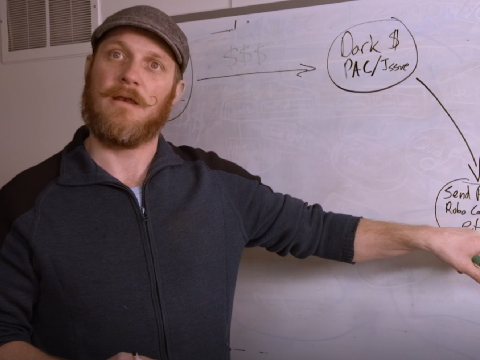 Earlier this week, PBS aired the documentary, Dark Money. The film is directed and produced by Kimberly Reed, previously known for her autobiographical documentary, Prodigal Sons.

Reed’s newest film again points the camera at her home state of Montana. In Dark Money, she spins a hyperbolic and misleading tale of so-called “dark money” polluting the environment and buying elections, first in Montana, before eventually infecting the rest of the country.

The film begins with the story of copper baron William Clark and his quest to become a U.S. Senator from Montana. Because Senators were previously elected by state legislatures, Clark attempted to bribe elected officials in Montana into choosing him. Even though the bribery scheme was uncovered, Clark was eventually chosen to represent Montana in 1900, albeit for only one term.

The story of Clark’s clear bribery is the proof that, in Montana, money buys elections – at least according to Reed.

This assertion not only ignores a mountain of evidence to the contrary, but conflates money being used to further speech with money used to bribe elected officials.

The documentary spends an inordinate amount of its run-time focusing on the horrors of political mailers. The top villains behind these mailers are nonprofit groups like the National Right to Work Foundation and Western Tradition Partnership, both of which were critical of the policies of certain Montana legislative candidates.

According to Montana investigative journalist, John S. Adams, these are the shadowy “dark money” groups that are buying elections in Big Sky Country.

At one point, Adams explains to viewers how dark money groups supposedly purchase democracy for corporations. Complete with a white board, Adams draws a line from a company giving money to what he calls a “dark money group,” which he labels a “Dark $ PAC/Issue” on his white board.” This group then spends money on mailers, which are sent to the voters of Montana.

Whether willfully or unintentionally, Adams misleads viewers when he uses the label “dark money PAC.” In reality, no such entity exists. PACs are heavily regulated political entities that are required to disclose detailed information about their donors and spending. By contrast, so-called “dark money” groups are better known by their nonprofit tax status as 501(c)(4) advocacy organizations. They can engage in some political advocacy, but it cannot be their primary purpose. Furthermore, many advocacy groups are well known, such as the National Rifle Association or Planned Parenthood Action Fund. Groups like these sending mailers about their key issues is hardly surprising or controversial to anyone familiar with political debates.

With that clarification out of the way, it’s what Adams says next where the film gets truly weird. Adams says that “it’s scary how [corporations] can manipulate [people] through the postcards and through social-science research and through analytics and metadata and bigdata and get us to support their candidate.” He continues, “it’s not the people controlling the government, it’s the government controlled by a corporation controlling the people.”

First, any Montanan with an internet connection can learn more about mailers that surface in their mailboxes. A Google search of Western Tradition Partnership, for instance, returns 21 million search results in 0.73 seconds. Furthermore, the power of mailers, or any kind of communication about a candidate, is vastly overstated. Even with such terrifying tools as “metadata,” many academics believe the effectiveness of mailers is mixed at best.

The very idea that all it takes for corporations to “buy” elections and control the democratic process is donating to groups that then send out mailers borders on the insane.

Returning to reality, nonprofit groups with different agendas often send out competing communications extolling the virtues of one candidate’s preferred policies or voting record and criticizing another for opposing those same policies. Is the Sierra Club buying a politician when they send out a mailer supporting a candidate who believes in stronger laws to protect the environment? To use an example from the film, is the National Right to Work Foundation buying politicians by distributing postcards critiquing candidates for their vote on a labor reform measure? Regardless of how you feel about either of these policies, these groups (and all others) are entitled to educate voters about where candidates stand on issues of importance to the group and their mission.

Even if Adams or any that subscribe to his worldview were correct in their belief that money only comes from one side, the amount spent is miniscule when compared to the spending by candidates and political parties themselves.

On the federal level, in the 2016 election cycle, “dark money” not only declined as an overall percentage of political spending from the previous cycle, but it accounted for less than 3 percent of total political spending. Against this backdrop, the idea that “dark money” is so effective as to swing elections to a corporation’s preferred outcome has little basis in reality.

The truth is that for all the whiteboards and conspiracy theories espoused in Reed’s screed, all they amount to is hysteria about mailers that look little different than any other material distributed by a candidate or political party.

Ultimately, the belief that money buys electoral outcomes remains more myth than fact. Campaign after campaignafter campaign shows well-connected and better-funded incumbents losing to upstart challengers who are willing to knock on doors and speak to voters in their districts. More than anything, voters respond to a candidate’s message. If those trekking to the polls don’t like a candidate’s vision, they’re not likely to pull the lever in their favor on Election Day.

For all the attention Dark Money pays to who is funding the messages received by Montanans, perhaps Reed’s time would have been better spent paying attention to the voters and why those messages might (or might not) have been effective.

Americans for Prosperity Foundation, a 501(c)(3) nonprofit, is challenging the state of California’s requirement that the organization provides to the state a list of ...