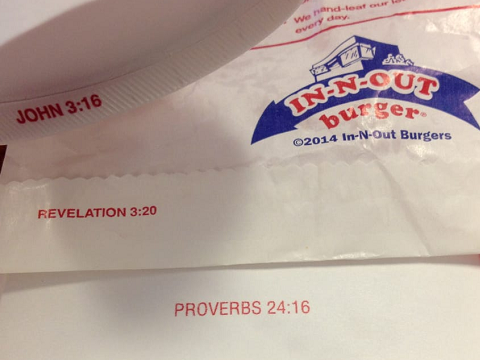 California Democratic Party Chairman Eric Bauman is calling for a boycott of In-N-Out burger because, horror of horrors, the company donates to Republicans.

No mention that In-N-Out also donates to Democrats in California; no thought that a company that quietly prints biblical quotes on its French fry packaging might hold certain ideological beliefs. Just, “You support the enemy, now feel the wrath of our boycott!”

We regularly talk about how disclosure laws harm First Amendment activity by subjecting individuals, companies, and advocacy groups to political attacks, often unwarranted as is the case here.

But what this example brings into stark contrast is that these kinds of harms aren’t random. They’re instigated by people in power that find easy scapegoats in those who have minority opinions.

California is a one-party state. There is no chance in the upcoming elections that Democrats will lose the Assembly, the Senate, or the Governor’s mansion. What possible threat to Democratic power could $25,000 from a burger chain present? That donation buys a few TV ads, which would likely have little effect beyond reminding a handful of viewers that California still technically has a Republican party.

Why call for a boycott over such a relative pittance? Because it’s an easy target. There’s no downside to wrongfully tying this donation to the President, who remains wildly unpopular in California. As a result, few are going to run to In-N-Out’s defense, even if your evidence for a boycott is misleading. Plus, you can send the message to other businesses: “Hey, don’t get caught supporting those dirty Republicans!”

And any chance to stir up some outrage is sure to drive voter turnout. Maybe Democrats can turn that 30 seat Assembly majority into a 32-seat margin.

From Bauman’s perspective, it’s a costless bit of politicking. But it is highly costly to his targets.

Of course, it should go without saying that just as the First Amendment protects In-N-Out’s right to associate with one (or both) political parties, it is California Democrats’ right to call for a boycott of the company for its associations. And any laws that attempt to hamper the right to boycott would draw equal (if not greater) ire from organizations like ours who fight to defend the First Amendment.

But these ‘safe’ attacks on minority opinions or associations do tremendous harm to the fabric of free speech across the country. Using disclosure data to economically harm businesses in California is no different than using anti-protest bills to silence environmental activists in Oklahoma. Democratic leaders calling for boycotts of businesses that support Republicans with their political donations is no different than Republican leaders calling for progressive college professors to be fired for their anti-Trump rhetoric.

People in power find an easy target and bully them into silence. Why? Not so much because they are afraid of their message, but because the target’s opinion is so unpopular, they’ll score some cheap political points with their team just for acting like a self-righteous bully.

Can the Clinton Campaign Be Indicted?

Special Prosecutor Robert Mueller’s indictment of 13 Russians for various violations of U.S. law pertaining to elections is drawing a lot of quick and ...

By Zac Morgan Just recently, a federal court in Oregon prevented a public high school from banning an anti-immigration T-shirt from its campus, notwithstanding the ...