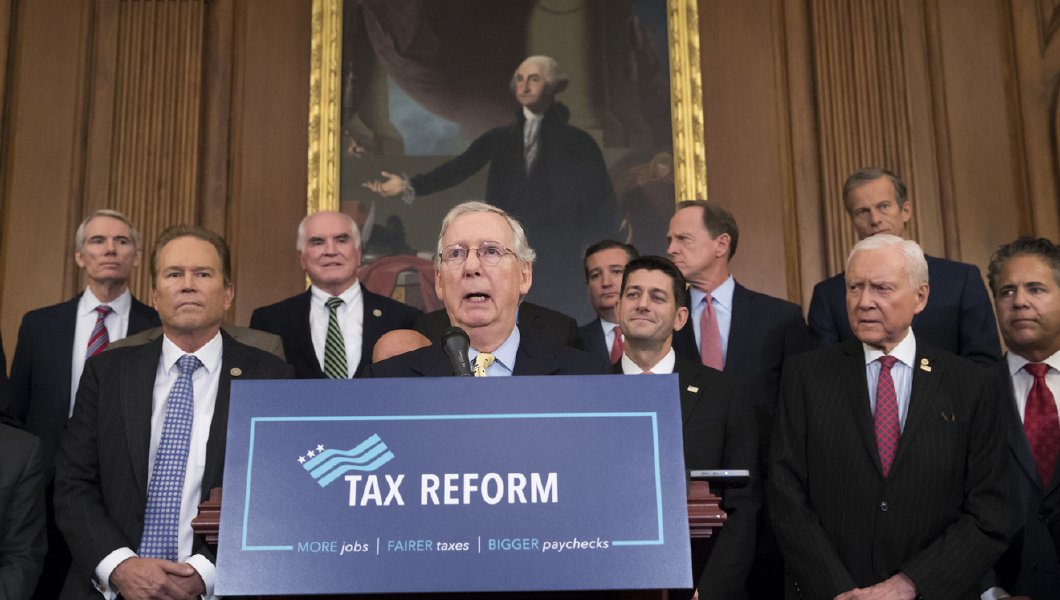 A perennial tactic in political debates is to oppose legislation not just in terms of ideology or policy soundness, but also to attribute the worst intentions to your rivals. The simplest way to do so is to call the other side “corrupt.” When you are so certain that your worldview is self-evidently correct, surely nobody could have honest disagreements with it.

This was the narrative after repeated congressional efforts to repeal the Affordable Care Act. GOP politicians fretted about how their failures would impact fundraising, which some took to mean that Republicans’ only motivation in health care reform was to do the bidding of “big donors.”

The same narrative has resurfaced with a vengeance for tax reform. The accusations of donor-driven corruption came not just from the usual suspects among progressive advocacy groups, but even from mainstream media institutions. The New York Times’ Editorial Board minced no words by calling the Senate version of the tax bill a “giant gift to [Republican] donors.” They point to statements by lawmakers like Rep. Chris Collins and Sen. Lindsey Graham, describing potential backlash from donors if they failed to deliver on this issue.

These arguments fit in with the worldview of campaign finance restrictionists who think that money rules politics above all else. But just like with health care reform, the truth is far more complicated than the simplistic narrative they paint.

First, it is worth pointing out that donors aren’t just wealthy elites. The most defining feature of donors is simply that they are motivated enough to open their wallets for a political cause. This year has seen record numbers of small donors giving to the Republican Party – and the GOP’s fundraising drop-offs after high-profile political failures have been across the board. A decrease in donors can signal a drop in other forms of support as well, like campaign volunteering or even voting. If the most motivated donors are defecting, why wouldn’t less motivated voters also be at risk?

Second, withholding financial support is an understandable reaction to some Americans’ frustration with Republicans’ stalled policy agenda. Interviews with donors found that their assessments of the GOP’s accomplishments overall have impacted their giving – tax reform is just one piece of the puzzle, alongside healthcare reform and the Supreme Court. Furthermore, Republicans have themselves to blame for raising the bar to a level that they could not reach. President Trump had promised a tax bill as a candidate and teased it throughout his first year in office. Financial analysts speculated that the stock market’s significant gains since the election were based on anticipation of tax reform. Essentially, donors supported Republicans because they desired the policies that Republicans campaigned on. If the GOP fails to deliver on those policies, it’s quite reasonable that those same donors would cease giving. This was equally true for Democratic donors who shied away from giving to Democratic candidates when they were in power and failed to deliver on various policy promises.

Third, tax reform is an economic issue whose implications go beyond narrow partisan goals. The centerpiece of the legislation is the lowering of the country’s corporate tax rate – currently the highest in the developed world. That’s a proposal that has been supported by think tanks and politicians across the aisle for years. Other provisions, like simplification of the tax code and repeal of the alternative minimum tax, have also found bipartisan appeal. Of course, Democrats and Republicans disagree on the specific methods for accomplishing these goals, but conservative donors’ desire for tax reform generally is broadly in line with many others.

To be sure, this particular tax bill has received significant negative attention. Some outlets have pointed to public polling to show that the general public supports raising taxes on corporations, rather than cutting them. But this still doesn’t mean Republican lawmakers have been “bought” by donors for pushing it.

Lawmakers can (and should) have a vision for good public policy that goes beyond opinion polling. Lowering tax rates, particularly on businesses, has long been part of that vision for Republicans. The truth is, politicians know they cannot convince everyone in the country that their policies are good. But they do need to convince their own voters. Polls that dig into party affiliation show that, while the general public largely opposes the GOP tax bill, their own voters are strongly supportive (59% of Republicans support it compared to just 28% of Americans overall).

Bottom line: Republican lawmakers are concerned about fundraising numbers because that is one barometer of how much support the Party has among its boosters – and that goes beyond wealthy elites. Donor backlash against politicians is not a matter of bribery or corruption, but a predictable outcome when a party fails to achieve its major promises.

Fixating on donors may reinforce a tidy narrative about politicians being bought by money. But, as always, it is the words and deeds of politicians – and the support of voters and political activists – that matters most. A useful rule of thumb? Be skeptical of anyone who tries to simplify a political issue by saying it’s “donors” on one side and “the public” on the other.

In politics, it’s easy for narratives to take hold before the facts have a chance to catch up. Political speech issues are no different. ...

Following the Senate’s confirmation of former Representative Tom Price as the Secretary of Health and Human Services in early February 2017, all eyes have ...