There Should Be Qualified Immunity for Protesters 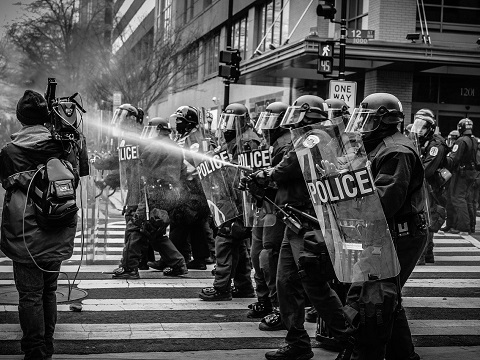 The right to protest is clearly enshrined in the First Amendment and is central to any legitimate democratic or free society. Protest challenges orthodoxy and injustice and draws attention to pressing issues that need to be remedied. The Supreme Court has an opportunity to increase protections for protesters by hearing Mckesson v. Doe. The Institute for Free Speech recently filed an amicus brief arguing that there should be higher standards before a lawsuit can be brought against a protest organizer. These higher standards would protect the speech of individuals by requiring “a more particularized and direct connection” between the harm resulting from a protest and the actions of the protest organizer.

Fortunately, a solution exists. Qualified immunity is a higher legal standard that would offer protections to protesters. Typically reserved for government officials, qualified immunity shields individuals from legal liability unless they clearly violate the law or the constitutional rights of others. The doctrine of qualified immunity should be extended to the content of the speech within a protest to protect the constitutional rights of citizens. This immunity should not be absolute, of course. For example, if someone negligently organized a protest with too little space and a large amount of people set off a panic, causing injury, then qualified immunity would not apply. However, merely speaking on a controversial issue should not expose protesters to liability unless they intentionally incite violence.

Mckesson v. Doe began after DeRay Mckesson, a Black Lives Matter activist, organized a protest in Louisiana where a police officer was hurt. The protest blocked a highway. When officers were dispatched to clear it, an individual threw a heavy object that severely injured a police officer, referred to in the case as Officer John Doe. Mckesson did not throw the object and never advocated for violence, but Officer Doe sued him for negligence anyway. Officer Doe argued that Mckesson “knew or should have known” that his organizing the protest could lead to violence.

Mckesson’s lawyers sought to have the case dismissed, but a Fifth Circuit panel ruled that a negligence lawsuit against him could proceed. In their opinion, the panel’s majority stated that “We perceive no constitutional issue with Mckesson being held liable for injuries caused by a combination of his own negligent conduct and the violent actions of another that were foreseeable as a result of that negligent conduct.”

The Fifth Circuit should not have allowed the lawsuit to proceed and should have mandated that the plaintiff show a more direct connection between Officer Doe’s injuries and Mckesson’s actions. If a lawsuit for negligence can be brought against Mckesson, then he will have to spend time and money defending himself in court. If he were to be found guilty, then he would be responsible for damages. But even if a suit against Mckesson failed, it would send a stern warning to would-be protesters across the country: engaging in basic First Amendment freedoms could lead to a costly legal battle. As Justice Louis Brandeis once eloquently noted, “Fear of serious injury cannot alone justify suppression of free speech and assembly. Men feared witches and burnt women. It is the function of speech to free men from the bondage of irrational fears.”

The First Amendment rightly sets a higher standard for when speech can be limited. One example is the famous New York Times v. Sullivan case, in which the Supreme Court held that lawsuits for defamation of a public figure could only recover damages when the publisher acted with “actual malice” and “reckless disregard” for the truth. The standard of actual malice is much weightier to prove than mere negligence. The justification for this higher standard isn’t too difficult to understand. If lawsuits for mere negligence were allowed, there would be a chilling effect on speech. Newspapers would be much more hesitant to publish factual but damaging information about public figures if they could be dragged into court and forced to spend time and money defending their reporting.

When it comes to protest speech, there should also be a higher standard for liability based on the content of one’s speech. The Supreme Court in Brandenburg v. Ohio ruled that speech can only be censored on the basis of inciting lawless action when the lawless action is intended, likely, and imminent. None of these standards were met in Mckesson’s speech. Mckesson did not intend violence, and holding a peaceful protest on a public highway is not likely to create an imminent threat of violence.

The doctrine of qualified immunity is a legal standard that protects government officials, like police officers, from liability for performing their duties in cases where the violation of constitutional or statutory rights is not clearly established. In Malley v. Briggs, the Supreme Court ruled that police officers should have immunity from liability unless they were found to be “plainly incompetent” or knowingly violated the law. In other words, alleging someone with qualified immunity is negligent is not enough to sue them unless you also prove plain incompetence or intent to violate the law. This doctrine shields actors performing their jobs from the potentially crushing costs of litigation while allowing a lawsuit if a violation of the law was clearly established.

Protesters should have their own version of qualified immunity. They should only be legally liable for the content of their speech if they act in a manner that is plainly incompetent or knowingly endangers others. The Brandenburg test provides the necessary standard. If someone intentionally incites lawless action, then they should be held liable. For example, if Mckesson, in the heat of a protest, pointed to Officer Doe and said “that officer needs a beating,” and the officer was subsequently attacked, then Mckesson should be liable. By contrast, merely organizing a nonviolent protest where someone was injured should not be enough to open the door to a potentially ruinous lawsuit. In the latter case, there should be a weightier burden on the plaintiff to prove wrongdoing.

The Civil Rights Movement was defined by protests that involved a risk of violence – often from their opponents or law enforcement – even if its organizers advocated for nonviolence. Was Martin Luther King negligent when he organized the Selma March because he could “reasonably foresee” that racist violence might occur at a peaceful protest for civil rights? Of course not. The potential for violence would not have been a valid reason to shut down the Selma March or slap Dr. King with legal liability if he persisted in protesting as he did. The First Amendment justifiably protects the protest rights of those like Dr. King. As Judge Don Willett explains in his partial dissent in Doe v. Mckesson, “Had Dr. King been sued, either by injured police or injured protestors, I cannot fathom that the Constitution he praised as ‘magnificent’ – ‘a promissory note to which every American was to fall heir’ – would countenance his personal liability.”

Some might argue that qualified immunity should be reserved for public officials acting in the course of their official duties and should not be extended to protesters. Being a citizen, however, carries with it the official duty to protest in the face of injustice. A democracy is ultimately governed by the people, and this gives every citizen an obligation to help ensure proper governance.

Protest is a mechanism for achieving proper governance. It is vital that we provide adequate legal protection to protesters. If the mere threat of a lawsuit is able to chill speech, without that speech causing clearly established harm, then our experiment with democratic governance will be seriously crippled. We need a higher standard of legal liability for protest speech so that Americans are able to exercise the freedoms our Constitution entitles them.

Feds: Want A Tax Deduction? Give Up Your First Amendment Rights.

Want a tax deduction or tax exemption? The Solicitor General of the United States says the price of that “governmental subsidy” or “voluntary tax-benefit ...