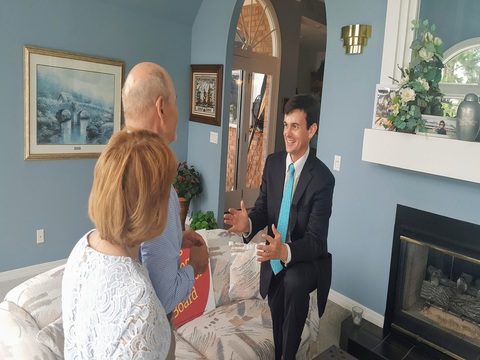 Holding that our client has a substantial likelihood of succeeding on the merits, a federal district court last week issued a preliminary injunction in Hetherington v. Madden (formerly Hetherington v. Lee). The court’s order prevents the state of Florida from punishing our client, Kells Hetherington, under the law he is challenging until the trial on the merits occurs. As a result, Hetherington is now free to speak to voters about his membership in the Republican Party as he campaigns for a seat on the Escambia County School Board in 2022.

You might expect that to have always been the case, given the First Amendment’s protection of free speech. Yet during his last campaign for school board, Hetherington was fined $200 by the Florida Elections Commission for stating that he is “a lifelong Republican” in an online voter guide. The Commission ruled that Hetherington broke a Florida law prohibiting candidates in nonpartisan elections from campaigning based on party affiliation.

Hetherington paid the fine and then sought help from the Institute for Free Speech to challenge the law as an unconstitutional restriction on his First Amendment rights. Such cases can take years to resolve, so we requested a preliminary injunction protecting Hetherington’s right to speak freely to voters in the campaign, which has already begun.

To win a preliminary injunction, the court must assess several factors, including whether a plaintiff has a substantial likelihood of ultimately prevailing in the case. The court ruled that we do, because the Florida law restricts core political speech and therefore must pass the toughest form of judicial review: strict scrutiny. To survive strict scrutiny, the state must provide a compelling interest for the law and show that the law is the least restrictive means of achieving that interest.

Florida claims two interests in prohibiting candidates from stating their party membership while campaigning for a nonpartisan office: administering nonpartisan elections and preventing voter confusion. The court accepted these interests as legitimate but ruled that the law both fails to achieve them and restricts far more speech than necessary to do so. In legalese, the law is “both ‘seriously underinclusive and seriously overinclusive.’” As a result, it fails strict scrutiny under the least restrictive means test.

Quoting from our brief, the court explained:

“If the purpose of [the law] is to protect Florida’s decision to have nonpartisan offices filled on a nonpartisan basis and to prevent voter confusion, [the law] is ‘woefully underinclusive’ because it permits campaigning based on ‘partisan-related experience’ and only prohibits expressions of party affiliation by nonpartisan officeholders during a campaign.”

In short, the law doesn’t stop candidates from promoting their partisan backgrounds. It also severely restricts a candidate’s freedom to share information that is highly relevant to voters. Even in a nonpartisan election, party affiliation can serve as a helpful shortcut for the public to quickly form an impression of a candidate. And, as the court explained, the law prohibits far more speech than necessary to achieve its narrow goal of preventing voter confusion:

“If the objective of [the law] is to prevent candidates for nonpartisan office from falsely and misleadingly stating that they are running as the official candidate or nominee of a political party, Florida could have employed far less restrictive means to further its interest, such as prohibiting candidates for nonpartisan office from making precisely this type of false or misleading claim…. Instead, [the law] curtails all speech that mentions party affiliation – ‘an instance of burning the house to roast a pig.’”

Hopefully, the final outcome in the case will mirror the court’s reasoning. The state may now appeal the injunction or opt to move on to the merits stage of the case. Either way, the Institute for Free Speech stands ready to protect the rights of Hetherington and all candidates who seek to tell voters truthful information about their political background.

Last week, Issue One – a group that advocates for greater regulation of political speech – published an interview with former Congressman Mike Castle. ...

Can the Clinton Campaign Be Indicted?

Special Prosecutor Robert Mueller’s indictment of 13 Russians for various violations of U.S. law pertaining to elections is drawing a lot of quick and ...