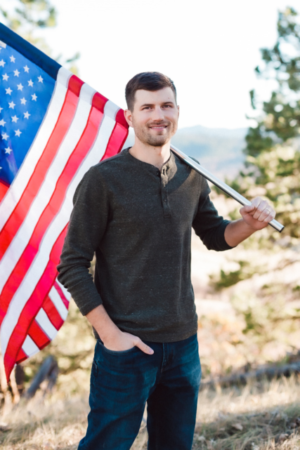 Luke Robertson, BSR member and plaintiff in the case

The esteemed executives enshrined on Mount Rushmore are keeping watch over a more speech-friendly state following our challenge to South Dakota’s unconstitutional restrictions on capitol gatherings in Blue State Refugees v. Noem. Demonstrators can now gather on State Capitol grounds year-round, and the state must pay attorney fees for interfering with this fundamental right.

When Blue State Refugees (BSR) sought to gather during special legislative sessions in November, the state rejected their request, claiming the entire 200-acre grounds were off limits for nearly two months while the Capitol was decorated for Christmas.

This sweeping restriction on gatherings and protests prevented speech at a critical moment. South Dakota’s part-time legislature ordinarily meets at the beginning of the year, but special sessions on November 8 and 9 afforded citizens an unusual chance to demonstrate while their representatives were all gathered in the Capitol. BSR wished to rally on the capitol grounds, which are typically available for events from 7 AM to 9 PM daily, in support of a bill prohibiting vaccine requirements for workers and students in the state. Instead, their numerous requests were absurdly denied on account of Christmas.

BSR reached out to the Institute for Free Speech for help, and we leapt into action. Within days, our attorneys filed a federal lawsuit challenging the rule and sought an injunction allowing the group’s protest to go forward. Now under pressure, the state reversed course and granted BSR a permit to rally as planned.

The case, however, was not over yet. BSR and IFS pushed forward, demanding a permanent change so that future demonstrators would not need to sue each time to secure their assembly rights at the Capitol. “Demonstrators can’t assume that the Noem administration will simply let up any time they want to rally. First Amendment rights will be much safer with this policy out the window,” said Alan Gura, IFS’s Vice President for Litigation.

The state eventually settled with BSR and agreed to conform its rules to the First Amendment’s requirements. It ultimately amended its policies to protect First Amendment rights by disposing of the two-month holiday ban and freeing up more of the grounds for events. It eliminated the old rule that had allowed only one “non-state event” on the capitol grounds per day. This meant that any one event, no matter how small, rendered the entire 200-acre property inaccessible to other demonstrators. The new policy permits one event per day per location. It also makes clear that the approval of one event does not preclude the use of the rest of the grounds by the general public.

“It is just disappointing how long this went on, how much the state fought,” said Luke Robertson, a member of BSR and a plaintiff in the case, in an interview with Dakota News Now.

Last week, the case came to a final conclusion when the court ordered the state to pay attorney fees for forcing BSR into court to defend their rights. Awards like these remind government officials everywhere that they’ll pay for violating the First Amendment.

The Institute for Free Speech took this case to ensure that the protest rights of South Dakotans are respected. Capitol demonstrations are a classic and indispensable method of making citizen voices heard. With the conclusion of Blue State Refugees v. Noem and the adoption of a First Amendment-friendly policy for rallying on State Capitol grounds, these vital gatherings should be safeguarded for years to come.