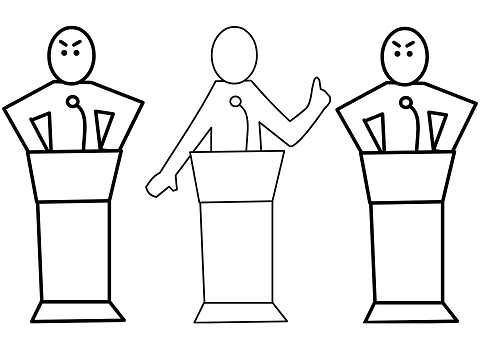 It’s been an inauspicious year for the Commission on Presidential Debates. After the first Trump-Biden debate was dominated by interruptions and bickering, the second was cancelled after President Trump tested positive for COVID-19. The candidates are set for a final debate tonight, but not every choice on your ballot will be there. Democrats and Republicans get to participate, but not the Libertarians, Greens, or anyone else.

The same was true in 2016, despite two uniquely polarizing candidates in American history. In the final Gallup polling prior to the November election, Sen. Hillary Clinton’s favorability rating was 47%. Donald Trump’s was 36%. In the year prior to the election, neither candidate ever managed to garner the approval of half the country.

Despite this, other candidates were never seriously considered. Third party candidates received scant media attention, were dwarfed by Clinton and Trump in ad spending, and, at the end of the day, garnered just over 5% of the popular vote. Still, 2016 was actually the best showing for third-party candidates in 24 years.

2020, once again, appears unlikely to disturb the major parties’ dominance. The idea that a third-party candidate could actually compete, let alone win, is almost unimaginable. Political scientists have spilled barrels of ink explaining why this is so. But in previous eras, candidates waging an independent run for president, from Teddy Roosevelt to Robert La Follette to Ross Perot, at least managed to air their views. In recent elections, even the ideas of third-party candidates have failed to make an impact on presidential runs.

Earlier this year, a lawsuit sought to pin the blame for this change squarely on the Federal Election Commission.

The argument went like this: Since the 1970s, the FEC has been in charge of making sure organizations that hold presidential debates (and take corporate money to do so) are nonpartisan. Those rules, last codified in 1995, demand that debate organizations have “objective criteria” for determining what candidates qualify. Despite this, the FEC has a gaping exception for the Commission on Presidential Debates (CPD). This Commission, which organizes every presidential debate that garners any attention, was explicitly setup to be bipartisan, not nonpartisan – that is, it is run by Democrats and Republicans exclusively for the benefit of Democrats and Republicans.

By setting criteria for the debates that only the Republican and Democratic candidates can meet, the suit argued, the CPD is violating the law, and the FEC is letting it happen.

The argument has some merit – the most obvious evidence being that no one since Ross Perot in 1992 has joined Republicans or Democrats on the debate stage – but it did not win the day in court, and it fails to capture just how big of a problem campaign finance laws are for third parties. It’s not just the debates that advantage major party candidates: The entire campaign finance ecosystem has been purposefully crafted to maintain the two-party duopoly.

It is not surprising that campaign finance laws written by Republicans and Democrats seem to favor Republicans and Democrats. Incumbents, of course, write laws to help them keep their jobs. But this bias also occurs without malicious intent. Often, lawmakers just assume two established political parties are all that matter and give no thought to how others would navigate the regulatory waters. And regulation in general favors big players – those who can hire attorneys, have the connections to solve issues, and possess a network of experienced colleagues who have done all the work before.

Consider just a small example where seemingly balanced campaign finance rules end up hurting third parties. Fearing “so-called” soft money pouring into political party coffers, the 2002 McCain-Feingold law imposed new restrictions on fundraising by the parties. Leaving aside the now quaint issue of “soft money,” the solution that politicians came up with was crafted from top-to-bottom without considering how third parties operate.

The law prohibits national parties from raising or spending money in state and local elections. That’s no problem for well-established parties that have candidates in every race – the California Democratic Party has the capacity to raise their own money. But it does mean the one Green Party or Libertarian Party gubernatorial candidate that has a shot can’t effectively or efficiently get help from her national party.

On top of that, the law, building on earlier contribution limits from the 1970s, creates a series of complicated limits on how much individuals can donate to state, local, and national party committees, and then limits how much those groups can give to one another. For Republicans and Democrats with a vast array of donors across the country, this ends up being nothing but a paperwork shuffle. But for a third party with far fewer supporters, these limits genuinely hamstring their activities. With less money and less flexibility, third parties are forced to campaign less, promote themselves less, and speak less.

The McCain-Feingold rules are just one example of the way campaign finance laws ultimately stifle third-party candidates. There are literally thousands of pages of rules and regulations just like these; regulators craft rules with Democrats and Republicans in mind, with ill effects for independents and third-party candidates.

For those who want to see greater diversity among candidates and ideas, reworking campaign finance laws would be an excellent start.

FEC v. Cruz is a forceful restatement of the Court’s intention to protect political speech and clarifies that governments must justify restrictions with specific ...