Updates to the Anti-SLAPP Report Card 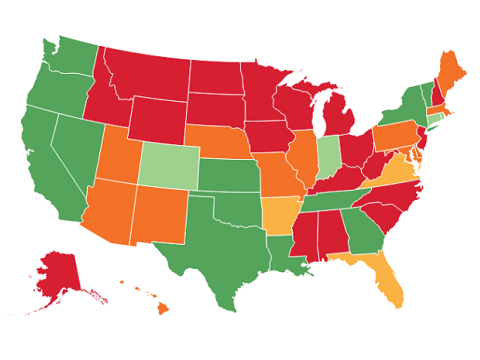 This blog post provides information on states that have either enacted new anti-SLAPP laws or improved existing laws since the February 2022 publication of our Anti-SLAPP Report Card.

As stated in the recently adopted legislation, “The purpose of this Act is to enact the Uniform Public Expression Protection Act.” Anti-SLAPP laws that mirror this model bill from the Uniform Law Commission earn a perfect score under the Report Card’s methodology, and the final version of SB 3329 doesn’t stray far from the model. We therefore expect Hawaii’s new law will earn a top grade for the state.

Like most “D”-level anti-SLAPP laws, Hawaii’s previous law covered an extremely limited range of speech, protecting only statements provided to a government body during a government proceeding. The Hawaii Public Expression Protection Act applies to any “exercise of the right of freedom of speech or of the press, the right to assemble or petition, or the right of association, guaranteed by the United States Constitution or the Hawaii State Constitution, on a matter of public concern.”

Showing, once again, the bipartisan appeal of robust anti-SLAPP laws modeled after the Uniform Public Expression Protection Act, Hawaii’s version of the bill passed the House and Senate without a single legislator voting against it.

While Arizona has had an anti-SLAPP statute for years, the law was among the worst in the nation, earning a “D-“ in our Anti-SLAPP Report Card. House Bill 2722, signed by Governor Doug Ducey on May, 27, 2022, will slightly improve the state’s overall grade.

As the Anti-SLAPP Report Card notes, Arizona would have jumped to a laudable “B+” simply by expanding the scope of its statute to cover all constitutionally protected speech on matters of public concern. While HB 2722 does add language to this effect, it also has an odd provision not in any other anti-SLAPP statute, which will greatly limit speakers’ ability to make use of the new law. As a result, Arizona will fall well short of the “B+” grade it could have earned without the provision.

This odd provision states that a defendant filing an anti-SLAPP motion must show that the lawsuit “was substantially motivated by a desire to deter, retaliate against or prevent the lawful exercise of a constitutional right.” Plaintiffs suing speakers will not be required to respond to an anti-SLAPP motion until or unless the target of their lawsuit has established this “prima facie proof.”

Arizona also eliminated the previous law’s provision that required payment of attorney’s fees and costs to defendants who prevail on an anti-SLAPP motion, which is the most important procedural provision in an anti-SLAPP law. The new law only allows the court to consider granting such an award. A right to an interlocutory appeal is created, but that too is conditioned on the defendant establishing the “prima facie proof” discussed above. So that appeal right may not be worth much in practice.

Due to the importance of the expanded scope of covered speech, Arizona will shed its “D-“, the lowest possible grade for a state with an anti-SLAPP statute, but will not rise by much. The effectiveness of the revised law will likely hinge on how the courts interpret it.

House Bill 222, which Governor Andy Beshear signed into law on April 20, 2022, was modeled after the Uniform Law Commission’s Uniform Public Expression Protection Act (UPEPA). An initial review shows that the final version of the legislation retains the essential provisions of the UPEPA. We therefore expect Kentucky’s anti-SLAPP statute to receive a near-perfect score under our methodology. Most importantly, the recently enacted law covers all speech protected “by the United States Constitution or Kentucky Constitution, on a matter of public concern.”

In a testament to the UPEPA’s bipartisan support, the legislation passed 82-0 in the House of Representatives and 30-2 in the Senate. After receiving bipartisan approval in the overwhelmingly Republican-controlled Kentucky General Assembly, the bill was signed by Kentucky’s Democratic governor.

Kentucky will join 12 other states with grades of “A-” or higher in our Anti-SLAPP Report Card.

Welcome to another absurd yet completely predictable installment of misusing disclosure data. This time, it’s the media outlet Axios misusing data and misleading the ...