If Corporations Can Speak, Then They Can Speak Freely 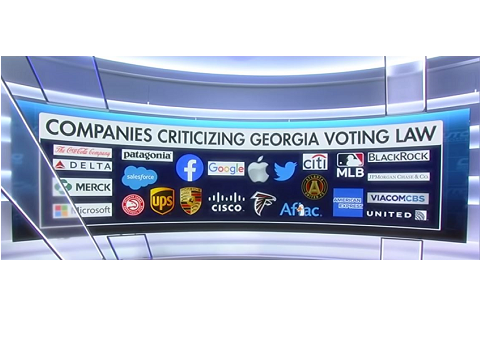 When the Georgia General Assembly took on voting rules in March, partisan attitudes toward corporate speech rights inverted. Some of the most vocal defenders of corporations’ speech rights, typically Republicans, suddenly wished to banish businesses that criticized the law from the political arena, while Democratic activists, traditionally eager to exile corporations from politics, demanded precisely the opposite. Both groups are wrong. A First Amendment right can’t be selectively defended or embraced.

Although they are often maligned, corporate speech rights are an important feature of a well-functioning democracy. While the right to free speech is often discussed in a personal context, businesses also have a stake in the political climate. Few would disagree that individuals should be permitted to criticize their national leaders and discuss legislation. It isn’t much of a democracy if the governed don’t have a voice. Businesses are subject to federal rulemaking, too. Not only does the Congressional power to tax and to regulate interstate commerce (to name just a few) directly impact companies, but businesses are comprised of people, after all – and they have valuable perspectives to share on how policy proposals may impact their work. As the debate around corporate speech continues, we must recognize that their rights are tantamount to our own. If corporations can speak, then they can speak freely.

As many companies took to opposing recent state-level voting laws in Georgia and elsewhere, Republican lawmakers took to opposing those companies, challenging their authority to participate in political discussions at all. Senator Marco Rubio wrote in a New York Post op-ed that “corporate America eagerly dumps woke, toxic nonsense into our culture” and warned that “these campaigns will be met with the same strength that any other polluter should expect.” Of course, companies’ public speech is subject to scrutiny, but threatening to use legislative power to beat down the political opposition is appalling.

Senator Ted Cruz echoed his colleague’s desire for retribution in late April, writing in The Wall Street Journal that, “For too long, Republicans have allowed the left and their big-business allies to attack our values with no response… We’ve let them smear Republicans without paying any price.” Even Senate Minority Leader Mitch McConnell – historically, an unwavering defender of First Amendment freedoms for all – appeared to deliver a call for corporations to “stay out of politics” before quickly clarifying his stance.

Democratic activists also took what might appear to be a less familiar stance on corporate speech rights. They not only welcomed corporate involvement in the push to combat Republican voting laws but implored businesses to speak. “They are complicit in their silence,” Black Voters Matter co-founder LaTosha Brown said of companies who had not spoken against the Georgia law. When Coca-Cola and Delta Airlines publicly condemned the law, Executive Director of Georgia Stand-Up, Deborah Scott, told The Guardian, “We’re glad they’re making these statements. We wish they would have made them 20 days ago, 10 days ago, before it was passed… [T]hey could have stopped it a long time ago had they made a statement.”

Ironically, many of the activists on the left now demanding corporate involvement in politics belong to groups that are working to strip those companies of First Amendment rights. For instance, Black Voters Matter’s website urges readers to call on companies to support H.R. 1, the most significant threat to the speech and petition rights of businesses (and nonprofits) in decades – and quite possibly ever. Former gubernatorial candidate Stacey Abrams told The Atlanta Journal-Constitution, “The companies that stood silently by or gave mealy-mouthed responses during the debate” about the Georgia voting law “were wrong.” Her organization, Fair Fight Action, asks supporters to “demand” that Senators vote for S. 1, the Senate version of H.R. 1.

H.R. 1 and S. 1, however, would severely diminish businesses’ ability to support left-leaning (and right-leaning) causes by imposing strenuous disclosure requirements and nonsensical mandates on groups mentioning candidates. Any group running communications that mention a federal official may be forced to publicly expose their most generous supporters. Many communications may simply ask readers to urge their senators to vote yes or no on a bill pending in Congress. Any business organization, such as the U.S. Chamber of Commerce, that spends $10,000 or more on such communications in an election cycle would be required to violate their members’ privacy in exchange for the right to speak.

Furthermore, such communications by groups with even a slight connection to the mentioned lawmaker would be prohibited under H.R. 1. If the bill were in effect now, a business group that held a meeting with a federal lawmaker to advocate the passage of voting rights legislation could not run an ad urging readers to do the same. The result is that companies would be far less capable of effecting social change than ever before, despite the increased calls for them to do so by the same politicians and activists pushing H.R. 1.

H.R. 1 would also repeal a longstanding restriction against forcing companies to disclose their giving to trade associations and nonprofits when seeking government contracts. As Institute for Free Speech Founder and former Federal Election Commission Chair Bradley A. Smith testified to Congress in 2011, exposing such giving would “interject into the contracting process political information that is illegitimate to the award of government contracts.” In other words, the bill would trade meritocracy for nepotism. Imagine losing business opportunities because federal officials take issue with your charitable giving. Economic incentives might drive those groups to silence. It is utterly insincere to champion corporate speech rights when they support your agenda while simultaneously advocating the passage of a bill that would muzzle businesses moving forward.

Cherry-picking when and how corporations can speak fundamentally misunderstands what it means to have freedom of speech. If corporations and their leaders can speak at all, then like everyone else, they can speak freely. Free speech means they can be as “woke” as they please. It also means that they can (because money facilitates speech) support or oppose whatever policies they please. Freedom of speech also permits us to call out hypocrisy – but we can only contest what was spoken, not the right to speak.

Selective Republican support for corporate speech only fuels the appearance that these politicians expect something in return for defending a First Amendment right. For those on the other side who are discovering a newfound liking for corporate political involvement, it’s nonsensical to advocate for a law that would silence your desired allies. Businesses’ right to a voice in our democracy depends on both parties coming to their senses soon.

Facebook’s recent decision to ban any new political and issue ads from running the week before Election Day is a predictable result of elected ...