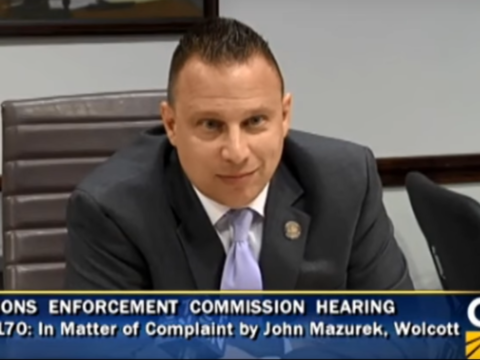 Can a candidate for the Connecticut General Assembly send a mailer opposing the policies of the governor? That is the question at the center of Joe Markley and Rob Sampson v. State Elections Enforcement Commission.

This case began in the run-up to the 2014 Connecticut election. State Senator Joe Markley and State Representative Rob Sampson were both running for reelection. The two candidates, whose districts overlapped, decided to send out a series of standard campaign mailers highlighting their policy positions in opposition to those of the sitting governor, Dannel Malloy.

In one mailer, for instance, the front page read “Southington’s Tax-Fighting Team!” The back of the pamphlet read “Rob and Joe have consistently fought Governor Malloy’s reckless spending and voted against his budget which resulted in nearly $4 Billion in new and increased taxes for Connecticut residents” and “Fought the Malloy Tax Hike: As members of the Appropriations Committee, Rob & Joe opposed our state’s largest tax hike ever, and helped craft an alternative budget that didn’t raise a single tax or cut any aid to our community or its seniors.”

This commonplace piece of campaign literature is illegal, according to the Connecticut State Elections Enforcement Commission (SEEC).

A complaint filed by Rep. Sampson’s opponent began the investigation into whether the fliers distributed by Sampson and Markley violated Connecticut campaign finance law. The SEEC ruled they did because they implicitly benefited Governor Malloy’s opponents by criticizing the governor’s policies.

In Connecticut, the cost of ads that support multiple candidates must be split equitably. While the Markley/Sampson pamphlets were paid for by their respective committees, the SEEC argues that because the mailers mentioned the governor, these were also ads in opposition to the governor. The cost of the ad, therefore, needed to be shared by someone running against Malloy, as well.

The SEEC further argued that, since Markley and Sampson participated in the state’s public financing program (and in so doing signed a form agreeing to follow all Connecticut campaign finance laws), the candidates should have known that their campaign literature was illegal.

The SEEC ultimately ruled that, by criticizing the governor’s record in mailers, Markley and Sampson had made an illegal expenditure on behalf of the governor’s opponent. The SEEC ordered Sampson to pay a $5,000 fine and ordered Markley to pay a $2,000 fine.

This ruling, and the underlying regulations and laws upon which it is based, are a clear and obvious violation of the First Amendment. Campaign regulators cannot fine candidates for expressing their policy positions in a mailer; they cannot force candidates to find a willing third party if they are critical of a governor’s policy, and they cannot demand veto power over a candidate’s message.

As Rep. Sampson attempted to explain to the SEEC, “We were trying to inform the voters in our district where we stand on these issues, so they can make an informed choice on who to elect. To me, that’s my job as a candidate… If I’m restricted from saying I oppose or endorse the policies of a sitting governor, what are [the voters] going to get to vote on?”

The Institute for Free Speech has taken this case to protect the rights of Connecticut candidates to freely and openly discuss issues and policies relevant to their constituents, even if such discussions reflect badly on the sitting governor.

A May 20, 2021 decision by the Connecticut Supreme Court resolved a dispute over the timeliness of the appeal and ordered the case to go forward, so that our clients’ First Amendment arguments can be heard and hopefully resolved. A press release explaining our clients’ important procedural victory in the Connecticut Supreme Court is available here.

Superior Court of the Judicial District of New Britain

Superior Court of the Judicial District of New Britain