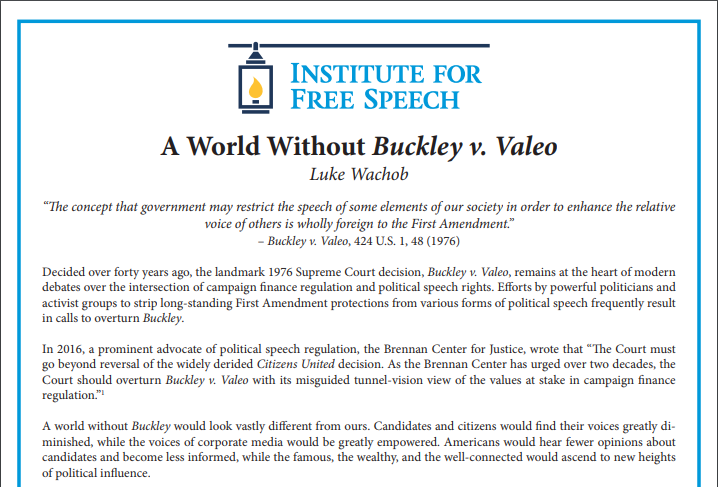 “The concept that government may restrict the speech of some elements of our society in order to enhance the relative voice of others is wholly foreign to the First Amendment.”
– Buckley v. Valeo, 424 U.S. 1, 48 (1976)

In 2016, a prominent advocate of political speech regulation, the Brennan Center for Justice, wrote that “The Court must go beyond reversal of the widely derided Citizens United decision. As the Brennan Center has urged over two decades, the Court should overturn Buckley v. Valeo with its misguided tunnel-vision view of the values at stake in campaign finance regulation.”[1]

A world without Buckley would look vastly different from ours. Candidates and citizens would find their voices greatly diminished, while the voices of corporate media would be greatly empowered. Americans would hear fewer opinions about candidates and become less informed, while the famous, the wealthy, and the well-connected would ascend to new heights of political influence. This Issue Brief discusses three consequences of an America without the Supreme Court’s landmark decision in Buckley v. Valeo.

Three Consequences of a Non-Buckley World

I. Low Limits on Campaign Spending Would Benefit Incumbents and Celebrities

Restricting the ability of candidates to speak to voters increases the value of prior name recognition and media coverage – areas where incumbents (and celebrities) possess a natural advantage. Even recently, disproportionate media coverage has been cited as a key factor in the outcome of the 2016 presidential primaries.[4] Spending limits would make the situation far worse.

If FECA’s restrictions on candidates seemed harmful, its rules for advocacy groups were a death sentence. Individuals and groups were limited to spending just $1,000 per election on speech “relative to a clearly identified candidate.” The Court wisely struck that limit down, observing that it “would appear to exclude all citizens and groups except candidates, political parties, and the institutional press from any significant use of the most effective modes of communication.”[5]

Indeed, this incredibly low limit would have made it virtually impossible for voters to hear a wide range of views on candidates’ qualifications and voting records. Consider the cost of modern advertising. A 30-second ad on primetime broadcast TV costs over $100,000.[6] A full-page ad in a major newspaper such as The Wall Street Journal can cost upwards of $200,000.[7] These forums would essentially be off-limits to political speech – except by media corporations themselves.

Everyone else would be muzzled. That includes long-standing organizations like the American Association of Retired Persons, American Civil Liberties Union, American Federation of Teachers, National Association of Manufacturers, the National Rifle Association, and the Sierra Club. Would this reality reduce the influence of “special interests”? Not likely. Instead, efforts to lobby policymakers behind-the-scenes would probably become more important – and more influential. But it would deprive Americans of hearing the diverse views and arguments of a wide range of groups.

Proponents of increased disclosure requirements often claim that Buckley sanctions their proposals. In Buckley, the Court wrote, “In summary, we find no constitutional infirmities in the recordkeeping, reporting, and disclosure provisions of the Act.”[8]

However, before reaching that conclusion, the Court first ruled that only groups with a primary purpose of influencing elections may be regulated as a “political committee.” Others, the Court said, can only be made to file simple reports and only when spending on “express advocacy” – an explicit message to vote for or against a specific candidate.

By contrast, modern disclosure advocates seek to impose PAC-like reporting requirements on a broad range of groups. Groups that engage in issue advocacy or simply mention the names of candidates near elections are frequently called on to report the private information of their supporters – names, home addresses, employers, occupations – to the government for publication in a searchable, online database. Buckley does not endorse that kind of disclosure. Imagine the negative consequences – harassment, intimidation, fear of speaking, a dearth of varied opinions – that would result in a world in which the Court didn’t rule the way it did.

The Supreme Court compromised in Buckley, upholding some of FECA’s restrictions on political speech and association, while striking down others. If the Court had upheld the more radical provisions of the law, or if Buckley were to be overturned in the future, American politics could be transformed beyond recognition. The voices of candidates and citizens’ groups would be muzzled, with the voice of corporate media and the already influential amplified even further. Americans would hear fewer views and have less information when voting. Preserving Buckley is essential to protecting the First Amendment right to free speech.

[1] “Overturn Citizens United and Restore a Pro-Democracy View of the Constitution,” Brennan Center for Justice. Retrieved on July 10, 2017. Available at:  https://www.brennancenter.org/analysis/overturn-citizens-united-and-restore-pro-democracy-view-constitution (February 4, 2016).

[3] Soo Rin Kim, “The price of winning just got higher, especially in the Senate,” Center for Responsive Politics. Retrieved on July 10, 2017. Available at:  https://www.opensecrets.org/news/2016/11/the-price-of-winning-just-got-higher-especially-in-the-senate/ (November 9, 2016).