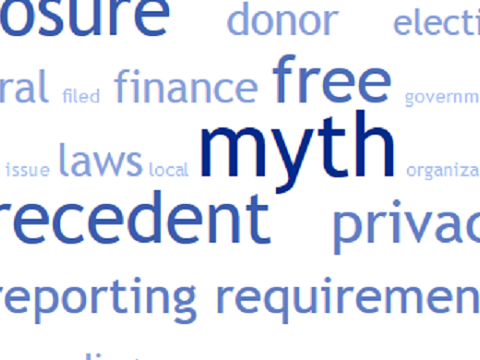 Specifically, the Court held that organizations may not be forced to register and report as political committees (“PACs”) simply because they wish to speak about candidates and elections. The Court called PACs “burdensome,” “expensive to administer,” and subject to “onerous restrictions.”[4] Yet, PACs are precisely the one-size-fits-all end-game for activist groups like CLC who seek greater “disclosure”; such groups want virtually all those engaged in political speech to be either regulated as PACs or subject to reporting burdens similar to those required of PACs.

CLC Myth #2:
So-called “dark money” groups are not required to “disclose the funders of their political advertising.”

As the CLC briefing paper notes, groups that receive or spend $1,000 or more per year to elect or defeat federal candidates, and whose major purpose is the same, must register as PACs and report detailed information about their spending and the private information of their supporters. Other groups that spend $250 or more per year on independent expenditures expressly advocating the election or defeat of federal candidates, or at least $10,000 on so-called “electioneering communications” that refer to a federal candidate within certain time windows prior to an election, also must publicly report their spending and comprehensive information about their donors who gave for the purpose of funding those ads. In short, while groups engaged in such political speech are, by CLC’s own admission, required to report their funding and spending, CLC nonetheless perpetuates the myth that such organizations are rampant, non-disclosing “dark money groups.”

As for CLC’s claim that the allegedly “deadlocked” Federal Election Commission (FEC) is “failing to hold dark money groups accountable,” the FEC actually achieved bipartisan consensus in 2014 on 93% of all votes, and on 86% of all substantive votes.[5] Despite this agreement, the reporting laws for PACs, independent expenditures, and electioneering communications are complex on their face, and are even more complex in their application. Reasonable disagreements by FEC commissioners on these issues are a sign the agency is carefully applying the law as construed by the courts, and is properly balancing groups’ First Amendment rights with the burdens of reporting.

Reality: CLC bemoans the lack of requirements for corporations to disclose their political spending. As discussed in Myths #1 and #2 above, much of the funding for political speech already is required to be disclosed by the speakers. Since 2009, among Fortune 250 companies, shareholder resolutions to require corporations to report additional information about their political spending have failed overwhelmingly by votes ranging from 75% to 83% opposed. Furthermore, 91% of these resolutions have been foisted on companies by labor and activist special-interest groups, rather than by institutional investors or shareholders who seek investment returns.[6] The vast majority of shareholders understand that the clamors for “disclosure” of corporate political spending are not in their interest.[7] The notion that inaction on this issue by corporations and the Securities and Exchange Commission (SEC) is thwarting a groundswell of shareholder support for these requirements is a myth.

CLC Myth #4:
The public demands even more campaign finance data than what is already available.

Reality: CLC complains about the lack of more, instantaneously available campaign finance reporting on the Internet than what is currently provided in FEC reports, SEC filings, and TV stations’ “political file.” While special-interest groups like CLC pore over such data, the average citizen does not share the same obsession.

CLC Myth #5:
Super PACs and their donors claim they are entitled to anonymity under the Supreme Court’s NAACP v. Alabama decision, but there is no constitutional right to privacy in political speech.

Reality: We are not aware of any super PACs or donors to super PACs categorically claiming to be entitled to anonymity, or making such claims specifically with respect to the Supreme Court’s 1958 NAACP v. Alabama decision. CLC’s assertion that this is the case is a “straw man argument.” Nonetheless, to the extent CLC is attempting to suggest there is no privacy interest whatsoever in political speech, that is also assuredly a myth. As the Supreme Court stated in Buckley v. Valeo:

we have repeatedly found that compelled disclosure, in itself, can seriously infringe on privacy of association and belief guaranteed by the First Amendment… We long have recognized that significant encroachments on First Amendment rights of the sort that compelled disclosure imposes cannot be justified by a mere showing of some legitimate governmental interest. Since NAACP v. Alabama we have required that the subordinating interests of the State must survive exacting scrutiny. We also have insisted that there be a “relevant correlation” or “substantial relation” between the governmental interest and the information required to be disclosed.[10]

In other words, there is a presumption that speakers have a right to privacy (regardless of the content of their speech), and that privacy right must be overcome by a “substantial relation” between a “sufficiently important governmental interest” and the disclosure burden imposed on the speaker.[11] To the extent a group does not have as its “major purpose” the nomination, election, or defeat of a candidate, the Supreme Court has held that the group may not be required to register and report as a PAC, as “the relation of the information sought to the [governmental interest] may be too remote.”[12]

CLC Myth #6:
There are claims that “issue ads” need not be reported to the FEC, and the FEC is not enforcing the reporting requirement for so-called “electioneering communications.”

Reality: As with Myth # 5, CLC is making a “straw man argument” here to the extent it is suggesting there are claims that “issue ads” that do not expressly advocate for or against candidates are categorically exempt from FEC reporting requirements. We are not aware of anyone seriously making this claim. As with Myth #2, CLC’s point that “issue ads” are subject to “electioneering communication” reporting requirements actually belies its more general position that the existing disclosure laws are insufficient.

[1] Eric Wang is also Special Counsel in the Election Law practice group at the Washington, DC law firm of Wiley Rein, LLP. Any opinions expressed herein are those of the Institute for Free Speech and Mr. Wang, and not necessarily those of his firm or its clients.

[16] See, e.g., Wisconsin Right to Life v. Barland, 751 F.3d 804, 810 (7th Cir. 2014) (noting that, “Like its federal counterpart, Chapter 11 [of the Wisconsin statutes] establishes an elaborate regulatory regime for campaign finance in state elections,” and that “the Supreme Court’s decision in Buckley v. Valeo . . . limits what [state] campaign-finance regulators may do”); Center for Individual Freedom v. Madigan, 697 F.3d 464, 480 (7th Cir. 2012) (“Because the Supreme Court has upheld [the Federal Election Campaign Act]’s disclosure requirements, we need not invent the wheel in this case. Instead, we identify the ways in which Illinois’s disclosure law is broader or more vague than FECA and then consider whether each difference is constitutionally permissible”); Center for Individual Freedom v. Carmouche, 449 F.3d 655, 663 (5th Cir. 2006) (noting that, “[t]he challenged provisions [of the Louisiana campaign finance statute] are similar to what the [U.S. Supreme] Court confronted and upheld in Buckley [v. Valeo]” with respect to the Federal Election Campaign Act).

Understanding the Differences Between Political and Issue Advocacy

This Issue Brief explains the differences between political and issue advocacy in both layman’s terms and as viewed by the courts. In particular, the ...