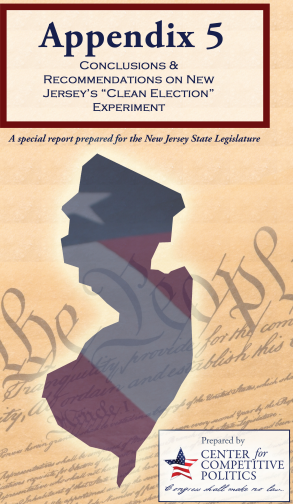 On March 28, 2008, the New Jersey Election Law Enforcement Commission released the 2007 Fair and Clean Elections Report, nearly 100 pages in length and including 4 appendices. The report presented data gathered from the taxpayer funded political campaigns of candidates running for General Assembly and Senate seats in the 14th, 24th and 37th districts in 2007.  However this report lacked any recommendations to the New Jersey Legislature. It also does not provide any conclusions on the success or lack thereof of the pilot project, or compare the observed outcomes with the stated goals of the program. While the report offers valuable information, the absence of such conclusions or comparisons in the report limits its usefulness to elected officials and the public.  As a result, this Appendix 5 will directly compare the program’s outcomes with its stated goals where possible, and the experience of Arizona and Maine, two states that served as the model for New Jersey’s program, will also be drawn upon when it is not possible to draw conclusions based on New Jersey’s limited experience.

The Institute's tenth issue analysis examines the claim by proponents of taxpayer-funded political campaigns that such systems improve the political process by exposing incumbent ...

Proponents of taxpayer-financed political campaigns, often called “clean elections” by their supporters, assert that these programs will produce more diverse legislative bodies by allowing a greater number of ...